It’s a hard stretch of imagination indeed to connect the dynastic intrigue of Verdi’s opera (and this is Shakespeare’s play) with money hungry stock trading witches. Nonetheless the high tech trading room provided a rich backdrop of arbitrary decor — binary numbers flashing on countless monitors, the myriad screens morphing into interpretive pop television images from time to time, the entire back wall of the white stage box becoming a gigantic TV screen of surveillance camera images of the opera’s murders, its apparitions, and the TV reportage of Occupy Wall St.
All this was simply the counterpoint of passionate pursuit of riches to an intense Freudian drama playing out center stage, Lady Macbeth nurturing the ambitions of her husband Macbeth with her idea of a realpolitik — the simple elimination of competing parents and their progeny. These acts evolved into the couple’s shared moral and physical sterility that precluded all possibility of creating their own succession. 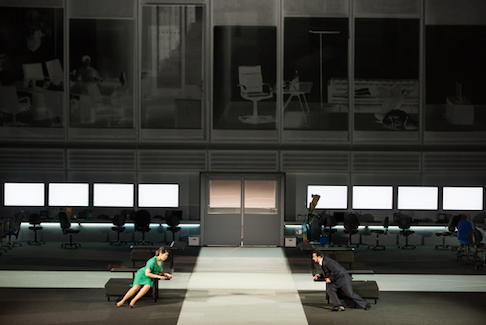 Lady Macbeth and Macbeth, above is negative projection of soon-to-be-murdered Duncan’s rooms
Stage director Ivo van Hove defied Verdi’s wishes for a Lady Macbeth of ugly voice and overt madness by creating a full breasted, nurturing Lady Macbeth of powerful, even beautiful voice to match her fully confident if morally hesitant and certainly beautifully voiced husband. Mr. Van Hove further defied Verdi (and Shakespeare) by ultimately joining husband and wife into one tortured being, Macbeth shadowing and suffering with Lady Macbeth in her final moments of torture. His ultimate spousal compassion was his strangulation of Lady Macbeth.
This was not the blood and thunder Verdi of political action, it was a Verdi of bel canto, two tortured beings singing themselves into a complicity of mutual understanding that was to become their destruction. It was the stuff of high tragedy.
Conductor Daniele Rustioni found the precise balance between beautiful singing and stinging feeling countered from time to time with Verdi’s interwoven compassionate flute and oboe solos. Mo. Rustioni worked unrelentingly with Azerbaidjan baritone Elchin Azizov, a fine singer and a gifted actor, and Italian soprano Susanna Branchini, a physically and musically elegant singer to find and musically achieve this latent, and very real human tragedy. 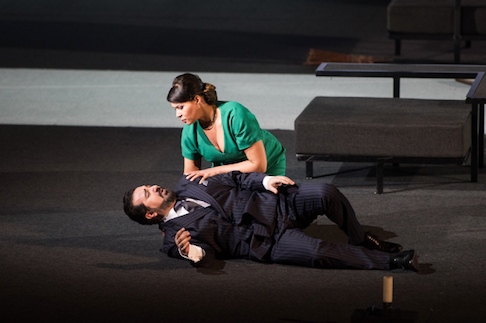 Macbeth and Lady Macbeth
Director van Hove wittily introduced a silent, observant black janitress who cleaned up the messes left on stage — the trader/witches’ printouts, Lady Macbeth’s bloody rags, the thrown chairs — and generally replaced the grim emotional residue with a stoic calm. She was a pointed, sarcastic comment on big money.
Director van Hove’s chorus scenes were masterfully configured, the chorus of female witches spread around the edges of the huge white box stage, its disembodied sound coming together in occasional center stage groupings. Of particular effect was the staging of the chorus of Scottish refuges, here something like later day East Coast flower children, who emerged in solo movements to animate individual suffering.
The opera’s triumphal chorus was a Occupy Wall Street camp bacchanal of live TV coverage including an gigantic cameo of beautifully sung lines by Macduff, Russian Arseny Yakovlev. There were splendid takes of cocky young Malcolm, the new king, sure to soon become, together with the balance of the Occupy Wall Street demonstrators, as greedy as Mr. and Mrs. Macbeth.
And such inevitable domestic tragedies to begin anew.
Maybe Mr. Van Hove did not have this resolution in mind when he created this production in the aftermath of the 2008 financial markets crisis and the 2011 demonstrations. But his fine production has discovered unexpected new resonance.
It was a splendid evening of beautifully produced opera.
Michael Milenski