Key scenes take place at night. The witches, who meet Macbeth ‘’ere the set
of sun’, are, says Banquo, ‘ The instruments of darkness [who] tell us truths’.
Lady Macbeth invokes darkness to help her to descend to hellish depths: ‘Come, thick night,/And pall thee in the dunnest smoke of hell,/That my keen knife see not the wound it makes,/Nor heaven peep through the blanket of the dark,/ To cry “Hold, hold!”’ While one would not doubt the
transformative magic effected by Shakespeare’s text, it’s a play that seems
less suited to a sun-lit staging on the broad platform of London’s Globe
Theatre, say, than to the candle-lit intimacies of the Sam Wanamaker
Playhouse which now sits alongside.

This might have been a matinee performance but Anthony Ward’s designs and
Paule Constable’s lighting set for Phyllida Lloyd’s 2002 Macbeth,
receiving its third revival at the ROH under revival director Daniel
Dooner, certainly plunged us into an enveloping blackness. And, as we moved
through murky vaults and weightily panelled castle rooms, strong contrasts
of shrouding coal-blackness and concentrated brightness vividly evoked the
claustrophobic darkness of the troubled mind – none more effectively than
the dagger of light that streaks like a bolt of lightning across the floor
as Macbeth contemplates regicide and its consequences. Even the cherished
and acquired golden sceptre, for all its bright gleam, suffocates with
hollow promise rather than liberates through ambition fulfilled: kingship
is a gilded cage, sometimes a miniature casket, sometimes spinning throne
room, but always sterile and unrewarding. 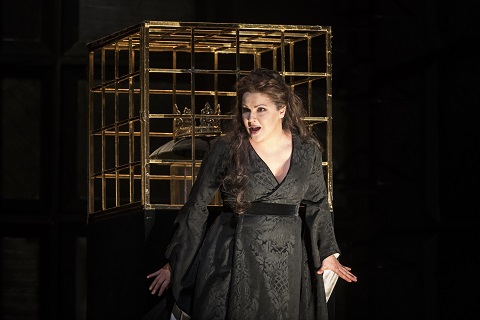 However, Lloyd and Ward also successfully enlarge the vista at times,
particularly with the arrival of Macduff’s and Malcolm’s armed soldiers in
Act 4. In this way, Macbeth reverses the trajectory of Othello which moves from Venetian streets, the beaches of Cyprus,
and rooms of state towards the terrible poignant intimacy of the
bedchamber. And, there are some impressing visual images which cut through
the prevailing gloom: the body of the executed traitor, Cawdor, splayed
behind the battlefield; Duncan’s blood-stained corpse displayed in a glass
coffin in the subterranean mausoleum where Banquo will meet his untimely
end; Lady Macbeth’s bath – a marble sarcophagus into which she slips at the
end of her first scene, thereby introducing the juxtaposition of blood and
water which runs through the play and will be underscored when the bath
returns in the sleep-walking scene. 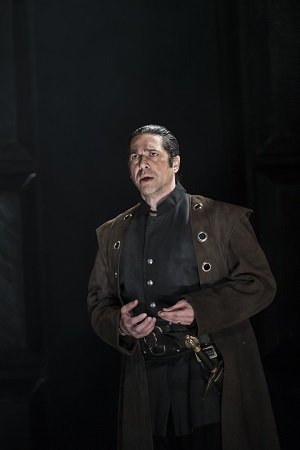 I am less enamoured by Lloyd’s decision to make the witches not just the
messengers of Fate but its very agents: they carry Macbeth’s
letter from the battlefield to his wife; they open a trapdoor which enables
Fleance to escape from the murderers who slay his father. Surely this
undermines the very notion of Fate which needs no assisting interventions?
More significantly, it conflicts with Shakespeare’s Queen’s conviction that
her husband will wear ‘the golden round,/ Which fate and
metaphysical aid doth seem/ To have thee crown’d withal’ [emphasis added].
And, in weakening Lady Macbeth’s own authority over her husband, the
ambiguity of influence is destroyed: is it Fate, evil as embodied by the
witches, his wife’s insatiable lust for power or Macbeth’s own ‘vaulting
ambition’ that drives the inexorable tragedy. Verdi himself had described
Lady Macbeth as ‘il demonio dominatore’ (the dominating demon … [who]
controls everything’. 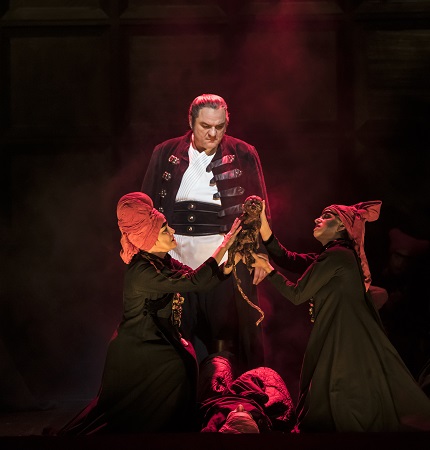 Admittedly, Verdi’s opera is less interested in individual psychologies
than Shakespeare’s play. Terrible acts are carried out, but the pace is
swift and there’s not time for much self-scrutinising soul-raking. And,
Lloyd uses the witches to create visual and dramatic coherence, as when
their red turbans metamorphose into the military sashes sported by
Macduff’s troops. Moreover, the branches from Birnam Wood which the
soldiers clutch are the very staffs so roughly stamped into the ground by
the witches in the opening chorus. The latter gesture and other
choreographic exaggerations, such as the witches’ tortured writhing at the
start of Act 3, sometimes border on pantomime. But, there are other
effectively choreographed moments such as the monk-habited murderers
killing of Banquo as he pays homage at Duncan’s tomb, and the staging of
the banquet scene which spins with slippery unease – though Banquo’s ghost
fails to make its present felt in the maelstrom.

I also remain unconvinced by the production’s intimation that it is the
anguish of childlessness that drives the usurping couple. Shakespeare’s
Lady Macbeth has ‘given suck’ (though admittedly the Macbeth’s children
don’t loom large in the play text); but, more importantly, she taunts the
unmanly, wavering Macbeth with her own derision for feminine and maternal
feeling and the fortitude of her purpose: ‘I … know/How tender ’tis to love
the babe that milks me:/ I would, while it was smiling in my face, Have
pluck’d my nipple from his boneless gums, /And dash’d the brains out,had I so sworn as you/ Have done to this.’

Lloyd’s reading seems to negate one of the most chilling images of the
play. In Act 3, Macbeth’s imagined dreams of happy family life are briefly
fulfilled by the witches who bring in a brood of children to perch upon the
marriage bed, bearing them aloft like angels, only to snatch them away
again and for the bed to divide, the schism between the couple – who remain
onstage, asleep on their single beds as Malcolm’s troops gather – forever
irreparable. But, it is surely guilt which isolates the couple?
Verdi, unlike Shakespeare, has Lady Macbeth in on the plot to murder
Banquo, but it’s hard to imagine that she kills herself – if indeed it is
suicide that brings about her end – because she is not a mother.

If the conflicts of conscience are suggested by Constable’s
contrasts of blackness and brightness, then conductor Antonio Pappano
conjured equally striking chiaroscuro effects from the ROH orchestra. The pianissimo wind melody and violin whispers which begin the
overture were brutally thrust aside by the loud heralding triplet motif of
dark bassoons, trumpets and trombones; then, from the silence, crept the
slightest, most tentative of violin forays, only for the strings to be
obliterated by a tutti onslaught. So the battle of light and
darkness went on, as vividly painted, and at times as shocking, as a
Caravaggio biblical drama. Pappano also knows how to make something of
Verdi’s rum-te-tum accompaniments, not quite, but almost, overcoming the
disjuncture we sometimes feel between the surprisingly jaunty musical
sound-world and what we imagine to be the unsettling maelstroms within the
individuals’ psyches. 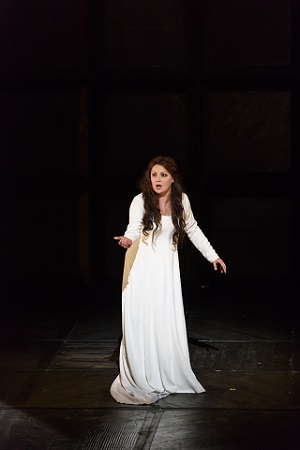 Of course, Verdi’s Macbeth needs a Queen who can reign over all,
and the ROH was fortunate to have Anna Netrebko to draw in the crowds and
preside vocally. I have to say that the icing on the cake of this
theatrically imperial performance – which was throughout and at the final
curtain vigorously and loudly lauded – would have been, for this listener
at least, a little more pitch-precision and occasionally a less steely
hardness. Netrebko’s Queen was reckless from her the first, storming wildly
through ‘Vieni! T’affretta!’ with impetuous fire and undeniable wilfulness
and in Act II’s ‘La luce langue’ (the 1865 revised Paris score was used)
her implacable desire, bordering on insanity, could not be doubted.
Netrebko’s soprano has tremendous weight – at the close of Act 2 she
brilliantly and brazenly surmounted the choral majesty – and both sheen and
darkness, and a whole host of other textures and colours in between. And,
if I longed for a little more grace at times then my wish was fulfilled in
the sleep-walking scene were such is the Russian soprano’s technique –
already greatly in evidence in the tight trills of the brindisi – that she
was able to bring together the conflicting voices of Lady Macbeth’s inner
conscience – the disjointed fragments, the leaps between registers, the arioso which tantalisingly offers the all too brief consolation of
cantabile lyricism – and she almost nailed the quiet Db peak at
the close. Perhaps Netrebko’s acting was a little too self-conscious at
times, but there’s no doubt that she created a lustrous-voiced Queen to
please the composer who called for a Lady Macbeth who was ‘ugly and evil …
[with] a diabolical quality’. 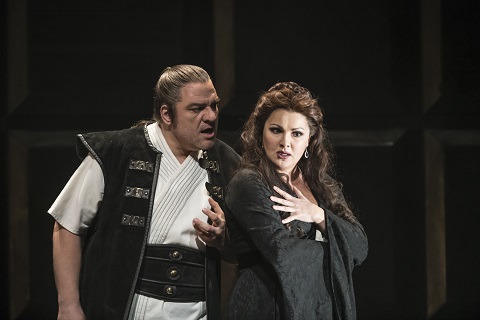 Netrebko was reunited with baritone éeljko Lu?i? with whom she appeared in Macbeth at the Met in 2014. Lu?i?’s warrior seemed psychologically
wounded from the start, unnerved by the appearance of the witches and
dominated by his wife, and he didn’t really plumb the depths of vaulting
ambition nor convince me that there was any chemistry between the regal
pair. But, Lu?i?’s baritone is mellow, if not velvety, and the line
elegant. If the vocal vacillations of Act I’s ‘Due vaticini’ were not
totally persuasive, and if the Serbian baritone had a tendency to be just
below the note, then Act IV’s ‘Piet‡, rispetto, amore’ was measured,
powerful and true. 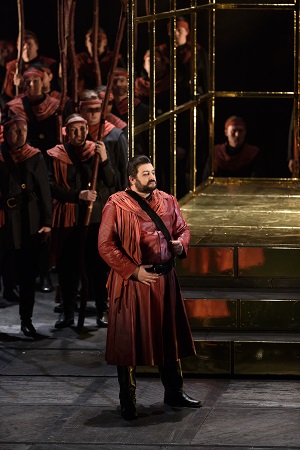 All of the emphasis in Macbeth is on the central protagonists –
Macduff is not an antagonist but a tenore comprimario and the
murder of Lady Macduff and her children are excised (though Lloyd makes
their presence felt briefly, when they make a hasty exit from the banquet)
– but the ROH cast for this revival is uniformly strong and we enjoyed a
beautiful exemplification of bel canto technique from
Yusif Eyvazov (Macduff) and a strong performance by Jette Parker Young
Artist Konu Kim as a reluctantly crowned Malcolm. I particularly liked the
directness and sombre colour of Ildebrando D’Arcangelo’s Banquo, and as the
Doctor and Lady-In-Waiting respectively, JPYA’s Simon Shibambu and
Francesca Chiejina introduced the somnambulist in clearly enunciated
recitative.

This may not be a ‘perfect’ Macbeth, if there can be such a thing,
but the cast – from fictional monarch to minion – conjure Verdi’s and
Shakespeare’s darkness powerfully and persuasively.