Carsen’s production debuted at Aix-en-Provence in 1991, was first given by
ENO in 1995 and last performed by them in 2004, and for this revival, the
cast featured the ENO Harwood Artists strongly. Christopher Ainslie was
Oberon and Soraya Mafi was Titania, with Clare Presland, David Webb,
Matthew Durkan and Eleanor Dennis as the lovers, Joshua Bloom was Bottom
with Graeme Danby, Simon Butteriss, Timothy Robinson, Robert Murray and
Jonathan Lemalu as the Mechanicals, Andri Bjorn Robertsson was Theseus and
Emma Carrington was Hippolyta, with Milto Yerolemou as Puck. The conductor
was Alexander Soddy, who is currently musical director of the
Nationaltheater, Mannheim.

The forest in Carsen’s production is the world of sleep and dreams, and
beds feature heavily in Michael Levine’s decor, and costumes give clear
visual definition to the various groups in the opera, complementing the
musical stratification which Britten uses to define his characters. There
is a big cuteness element in the treatment of the fairies (the excellent
Trinity Boys Choir) with their tailcoats, very formal manners and elaborate
choreography (originally Matthew Bourne, revived by Daisy May Kemp).
Perhaps the production does not dig very deep into the opera’s psyche and
is a little too keen to please, but it forms an excellent vehicle for such
a revival with a large contingent of young singers.

Yet, A Midsummer Night’s Dream was originally written for the
Jubilee Hall in Aldeburgh, which seated just over 300 as opposed to the
London Coliseum which seats over 2000. Like the recent productions of
G&S at by ENO, there is a sense of Britten’s opera having to be
re-invented to fill the Coliseum spaces, and you felt that not all the
performers in this revival had yet found their feet.

Christopher Ainslie looked superb as Oberon, tall and aristocratic with a
slightly icy demeanour which works well with Britten’s writing for the
counter-tenor voice (as originally sung by Alfred Deller). But the
tessitura of the role is rather low for a modern counter-tenor, and though
Ainslie sang with a lovely warm timbre and flexible sense of line, his
voice did not project with the sort of commanding grace which the role
needed though having so much of the action up-stage did not help. Alexander
Soddy’s speeds seemed, at times, dangerously slow and Ainslie’s ‘I know a
bank’ was rather slower than was ideal.

By comparison, Soraya Mafi as Tytania had got the measure of the venue and
projected the role’s coloratura with personality and ease. She made a
delightful Tytania, not as bitchy as some, and brought real charm to
Britten’s roulades and an underlying sense of humour in the scenes with
Joshua Bloom’s bottom. Given her fine performance has Handel’s Cleopatra in Giulio Cesare for English Touring Opera, Mafi is clearly a talent
to watch in this repertoire. 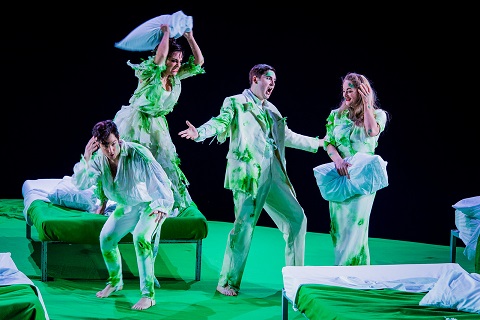 Clare Presland as Hermia, David Webb as Lysander, Matthew Durkan as
Demetrius and Eleanor Dennis as Helena made a lovely, well-characterised
group of lovers, clearly relishing the opportunities that the second acts
confusions gave them. Each brought a nice sense of character to the role
with Eleanor Dennis’s rather uptight, blue-stocking Helena (who loosens up
considerably), Clare Presland’s spunky Hermia, David Webb’s nice but dim
Lysander and Matthew Durkan’s bellicose Demetrius. In a smaller venue this
would have worked very well, young voices singing roles just right for
them, but in the Coliseum, an element of the drama did not quite cross the
footlights and though it looked good, the singers’ sense of engagement did
not quite project. But this is something which will develop over the run. 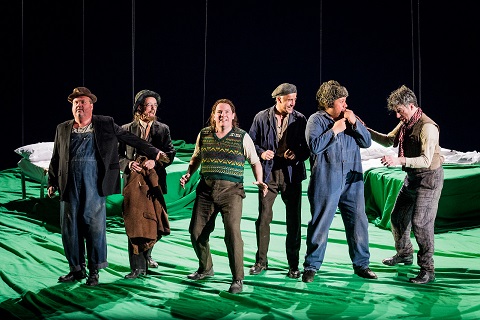 With such an experienced group of Mechanicals, there was little danger of
the drama failing to project here. Joshua Bloom made an engaging Bottom,
well sung and nicely characterised with an arrogant swagger but without too
much of the self-importance which can be a bit annoying. He had great fun
with the suggestiveness of the donkey costume. The others were all
effectively and colourfully projected, with Robert Murray’s bashful Flute,
Graeme Danby’s officious Quince, Simon Butteriss’s rather overlooked
Starveling, Timothy Robinson’s delightful Snout and Jonathan Lemalu as an
engagingly dim Snug. They had great fun with all the comic business, and
frankly, the only way to play the operatic send-up of ‘Pyramus and Thisbe’
is to play it to the hilt, which they did.

Andri Bjorn Robertsson and Emma Carrington made a noble looking Theseus and
Hippolyta, joining with the lovers in the third act to make terrible fun of
the Mechanicals. 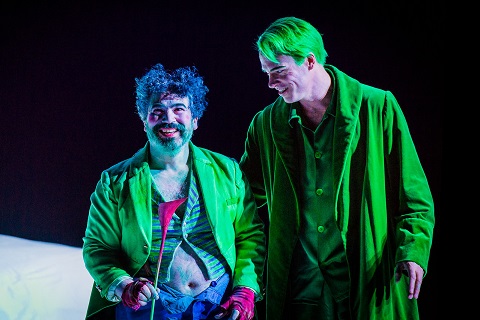 Miltos Yeremolou made a very funny Puck. A very physical performer,
sometimes you wondered whether it was a little too much, should the
production be quite as funny as that. But then, Carsen’s overall conception
does not really mine the darker side of the opera, and I rather longed for
something which sat between Carsen’s cuteness and Christopher Alden’s dark
dystopian view.

The Trinity Boys Choir performed admirably as the fairies, dealing
admirably with the complexity of the staging along with Britten’s music.
The four young soloists, Aman de Silva, Lucas Rebato, Caspar Burman and
Dionysius Sevastakis made a fine quartet of solo fairies.

Conductor Alexander Soddy, making a rare appearance in the UK, brought a
great sense of detail to Britten’s score and drew out some lovely and
evocative textures from the players. The opening string glissandi were
simply magical, but on occasions, Soddy seemed to rather linger too long
over lovely details. In what is quite a long piece, you wanted a bit more
dramatic impetus.

This was a revival which you feel needs a little more time to come into
focus, but it presents a welcome opportunity to hear five of the current
ENO Harewood Artists alongside other young singers, complemented by a fine
group of Mechanicals.