Lise Lindstrom has been performing her signature title role in all of the
world’s leading houses and it is easy to see why she is in demand. Ms.
Lindstrom has all the stamina, range, and vocal quality required to succeed
in this fiendishly difficult “sing.” Her searing upper range is steady and
full without ever becoming acidic. Her low and middle ranges have a round,
warm appeal that help humanize the icy princess to a certain degree.

Lise is also a lovely presence on the stage, dramatically committed and
exuding an unerring musicality. That the voice still sounds fresh and free
after so many outings with this punishing part (and others) attests to her
rock solid technique. That she still communicates spontaneity and
truthfulness in her portrayal attests to her intelligent artistry. I’m not
Guinness, but I am guessing that the diva is setting a world record with
her career totals of singing this part.

She was well matched by the solid tenor Carl Tanner. The role of Calaf in
general and the aria Nessun dorma in particular are weighted with
the baggage of expectations. Corelli, Carreras, Del Monaco, Domingo and
most especially Pavarotti scored legendary successes in the role. Luciano’s
famed rendition of the aria was nearly inescapable in its popularity. Mr.
Tanner (who has performed the part over 100 times) makes the part his own
sporting a sturdy, engaging instrument that is even throughout the range.

While his voice has considerable weight, he can soar above the staff with
skill and an easy power. He embodies all the pathos required inNon piangero Liu, and checks all the blocks with an assured Nessun dorma. If he doesn’t have quite the final Italianate ping
and sheen we are accustomed to, his knowing portrayal is nonetheless
immensely affecting. 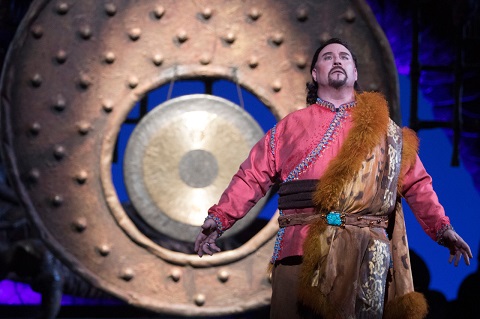 As can happen, Liu threatens to run away with the show. Part of the reason
is that she is the only sympathetic character in this oft troublesome piece
of writing. But she still has to deliver the goods and in a role debut, the
buoyantly appealing Angel Joy Blue does all that and more. Ms. Blue has an
uncommonly alluring spinto soprano, limpid and secure, and she knows just
how to caress a phrase and touch the soul. Her two famous arias are served
up with heartfelt investment in every utterance, and her floated high notes
were particularly ravishing.

Brian Kontes offered a notably well sung Timur. Mr. Kontes has a rolling,
charismatic bass with dusky overtones and wonderfully weighted presence. He
found every inch of measured pathos in a part that sometimes gets short
shrift. His assured stage presence made a substantial contribution to the
evening’s success. 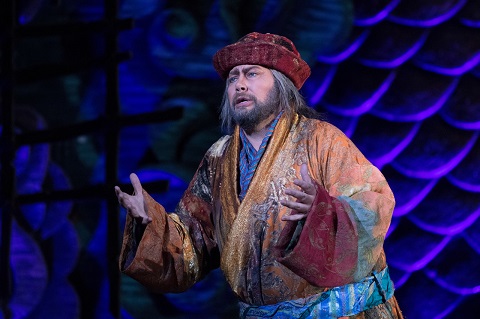 Ping, Pang and Pong were enthusiastically embodied by respectively, Marco
Nistico; Joseph Gaines, and Joel Sorenson. Mr. Nistico’s Ping was
warm-voiced and stylistically secure, although his substantial baritone
sometimes seemed a bit covered in the upper middle. Mr. Gaines, as Pang,
showed off his well-schooled, poised tenor all the while investing the part
with his usual animation and dramatic commitment. Pong was well taken by
Mr. Sorenson, who has a lean, shining tenor that admirably rounded out the
trio.

While the three meshed beautifully as a team, at times functioning like a
manic Commedia troupe, they found fully-realized, personalized
characterizations. Their introspective yearnings for home in the Act II
opening scene, were spell-binding in their melancholy and vocal beauty.
Rounding out the cast, Chad Frisque’s plaintive, steady tenor made a good
impression as the Emperor, and Scott Sikon’s stentorian bass-baritone made
the most of the Mandarin’s declamations. Bruce Stasyna’s well-tutored
chorus proved a powerful presence and their nuanced vocalizing was another
potent element in the night’s musical arsenal. 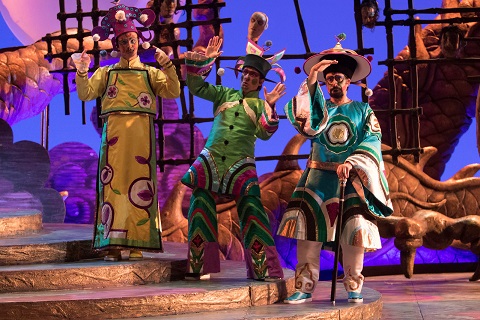 In the pit, conductor Valerio Galli whipped up a rousing reading ,
delighting in the detailed, angular chinoiserie, and eliciting a
fine sense of ensemble that fully supported the singers without ever once
overwhelming them. Maestro Galli’s winning grasp of the verismo
style was evident throughout, and he ably coaxed and encouraged the
talented orchestra to cover itself in glory.

The physical production was all one could wish. Allen Charles Klein has
used a huge, snaking Chinese dragon as the basis for his set design and it
was a strikingly effective solution. Mr. Klein borrowed a page from Wieland
Wagner and has a large raked disc center stage, from which steps of circles
spill downstage and to the sides, creating other playing spaces. With the
addition of steps up to a higher stage right platform (for Altoum), and
steps to an upturned “claw” that reaches right, giving us a wonderful
playing space that offers plenty of levels. At one point a giant crystal
ball is being held by said “claw.” A gong unit cleverly descends from the
flies on cue.

Although this is the basis for the design, it never feels like a unit set.
In Act One, grids of oversized, criss-crossed pick up sticks frame the
action. Act Two begins with a black scrim isolating part of the downstage
“discs” which become the library for the ministers of state, with the
simple addition of chests/desks that contain their scholarly scrolls. For
Act III, a mid-stage foliage-like arch hovers over the stage, obscuring the
basic structure until the re-entrance of the full cast for the climax. 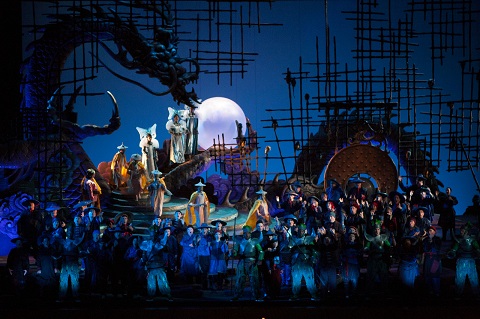 All of this was made to look atmospheric and sumptuous thank to the
vibrant, well-judged lighting design from Lucas Krech. Mr. Krech calibrated
a full palette of color washes, created good area definition, and utilized
effective isolated specials to marvelous effect. The transition from the
ominous bluish night of fear and threats, to the dawn of love and
absolution was particularly striking. Willa Kim’s colorful, lavish costumes
were a visual delight. Ms. Kim manages to dazzle the eye even while
dressing the commoners in rich earth tones befitting their station. Steven
W. Bryant’s skillful wig and make-up design completed the total success of
the physical production.

Keturah Stickann has staged the epic with care and imagination. There are
long stretches of massed ensemble singing, and Ms. Stickann manages to move
the traffic to ever more interesting groupings and stage pictures. She
makes excellent use of the levels to suggest the shifting power between the
principles.

Although Puccini and his librettists have not given a wealth of detailed
background to the characters (Calaf is especially undefined if tuneful),
this director has worked with her cast to provide as much specificity as
possible, while creating believable character relationships. Keturah has
found a wealth of humor in the lively antics of the ministers, and created
a truly moving moment after Liu’s suicide. I won’t completely give it away
but it evokes a sort of touching “walk to paradise garden.”

This commendable production does exactly what any fine rendition must do:
maximize the substantial musical excellences and successfully distract from
the vagueness of characters’ individual emotional journeys. As the rafters
rattled with some pretty thrilling singing, you knew you were at the right
address.

It is hard to believe that a company capable of such a top tier assemblage
of internationally acclaimed talent almost slipped from the opera scene two
years ago. I hope that that problem is firmly behind SDO, since there is
decidedly no problem with high quality of the product.