Now on its second run having been transferred to the Duke of York in the West End from Hampstead Theatre where it premiered in 2015, the play does so much more than just tell the story of the Sussex opera festival.

The man under the spotlight is of course John Christie, in a charismatic performance by Roger Allam, whose love of Germany, Wagner and his wife lead him in the quest for the ideal. Audrey Mildmay, the moderate soprano and John Christie’s much younger wife is delightfully played by the Olivier Award winner Nancy Carroll who is in many ways the true driving force behind the enterprise, ruling with grace and intervening with tact and diplomacy when artistic tensions rise. In the process, she also steers Christie into keeping the standards high: ‘If you’re going to spend all that money, John, for God’s sake do the thing properly!” she urges him. 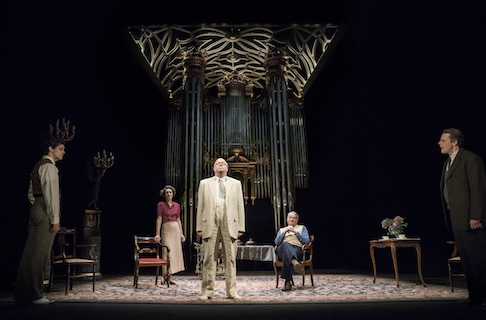 For an opera festival which is now seen as quintessentially English it is no small irony that at its heart lay the talent of three Hitler refugees: Paul Jesson as conductor Dr. Fritz Busch, Anthony Calf as Professor Carl Ebert and Jacob Fortune-Lloyd as Rudolf Bing, who was later to become General Manager at the Metropolitan Opera in New York. The story incorporates a penetrating account of the rise of Nazism and its effect on various opera houses across Germany in the early 1930’s—the realities of which many across Europe were slow to fully grasp.

In Hare’s portrait, Glyndebourne’s founder is a wealthy and eccentric landowner who has a peculiar fondness for ‘efficiency’ and praises Germany for its ‘flowers everywhere, perfect roads, good houses, clean streets, cultured people, perfect traffic control’. He is said to have attempted to establish a Ministry of National Conscience and, interestingly, saw opera as public service: ‘My fellow countrymen need cheering up!’, he utters—and he’s the man to do it. Not a view we should perhaps entirely dismiss today. His love of the art form is then beautifully captured in his impassioned speech on the virtues of the sublime and the purpose of art.

It all takes a very unexpected direction however when the theatre as built is found unfit for staging Wagner’s monumental works: ‘For a jewel box theatre, you need jewel box music’, the conductor informs us. Much to Christie’s (amusing) exasperation, the first season in 1934 does not open with Parsifal but with two operas, both by Mozart—a state of affairs which would continue in subsequent years. The opening night with the Marriage of Figaro was a resounding success and drew a full house to what was then a 300-seat auditorium. The following production of Così Fan Tutte was less of a triumph, with only 7 seats sold at first—a situation which was quickly remedied once they got on top of promoting the festival.

The sets are cleverly designed by multi award-winning theatre and opera designer, Bob Crowley, and include a beautifully decorated home interior and a fun take on the gardens at Glyndebourne. Skillfully directed by Jeremy Herrin, the play is a tribute to artistic vision and the love of an art form. It is also a piercing portrait of an era, an institution and a marriage—one that opera-goers should not miss.