Such news made the evening’s concert, which had affectingly reminded one of
the human and individual cost of war, seem even more poignant, and
pertinent. After all, wherever or whenever the conflict, the ‘Unknown
Soldier’ is always someone’s husband, father, brother or son – as Lilian
Elkington so touchingly communicates in her little-known tone poem, Out of the Mist (1921), which her own programme note describes as
a meditation on ‘the meaning of sacrifice’. The seven-minute work evokes
the scene at Dover as the destroyer HMS Verdun emerged from the
Channel mist, bearing home the coffin of the Unknown Warrior for state
burial at Westminster Abbey the following day.

Elkington (1901-69), who studied piano and composition at the Birmingham
Midland with Granville Bantock, would have been forever consigned to
obscurity had not David J. Brown fortuitously come across the score and
parts of Out of the Mist in a second-hand bookshop in Worthing in
the early 1980s. It had been performed at the student concert in 1921, and
subsequently in Harrogate and Bournemouth. But, marriage to Arthur Kennedy,
a violin and viola player, in 1926 brought an end to any thoughts of a
professional career as a composer or pianist – as was so often the case for
women at that time. Though she remained involved in music, as an organist
and choir mistress, when Elkington died in 1969 her husband remarried and
destroyed all her scores and the programmes of her performances. But for
Brown’s discovery, Out of the Mist would probably itself have
remained unknown.

It deserves to be heard, as Davis and the BBCSO confirmed. The mysterious
opening – murmuring pulses from horns and timpani against muted low strings
and quiet cello eloquence – conjured the oppressive darkness of the ocean’s
deep surge and swirling mist. ‘The ship feels her way through the murk’,
wrote Elkington, and Davis conveyed the growing urgency of the forward
movement, as the upper strings and woodwind solos brought some brief
brightness, the tonic-dominant swings of the timpani pressing inexorably
onwards. Davis captured the grandeur and solemnity of the concluding Largamente appassionato, in which, ‘with a burst of sad exaltation
the representative of the nameless thousands who had died in the common
cause is brought out of the darkness to his own’. The nobility is never
verbose, the economy of means directly communicative and deeply expressive.

The World Was Once All Miracle
(2016-17) by Hong Kong-born, London-domiciled Raymond Yiu was both more
complex and more elusive – inevitably, perhaps, given that this
six-movement orchestral song-cycle sets autobiographical texts by Anthony
Burgess, the centenary of whose birth during the last years of the war it
was commissioned to celebrate. ‘It takes a while to find the real person,’
says Yiu of his ‘sound-portrait’ of Burgess, and one senses this search in
the score’s juxtaposition of contrasting idioms and musical quotations –
one song even draws on a sketch by Burgess himself, who was the composer of
more than 250 works in a plethora of styles – as well as Yiu’s own
multi-cultural heritage. 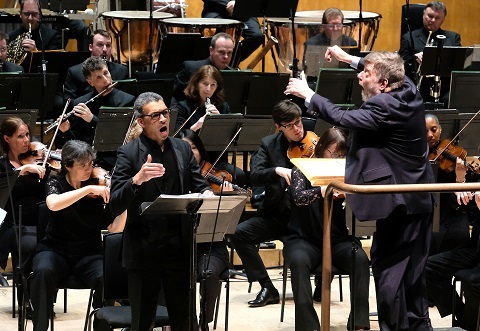 Baritone Roderick Williams, who premiered the work at the Manchester
International Festival in 2017 with the BBC Philharmonic under Michael
Francis, appeared entirely comfortable with the riddles, shifts, paradoxes
and flights of both text and score, singing with characteristic ease and
naturalness, articulating all of Burgess’s deliberately, playfully,
pointedly abstruse lines with effortless clarity. ‘Sick of the sycophantic
singing,’ he began, as, with no hint of irony, the frustrated repetition of
the opening word was met with orchestral punches. Davis carved a rich sonic
spaciousness as image piled upon image, of flames, forbidden flowers, a
‘shrill electric bell’ and shimmering light (tingling pianissimo
xylophone), culminating in a ‘bloody thunderbolt’, then silence. In the
slower songs, ‘For we were all caught in the shame of sleep’ and ‘You were
there and nothing was said’, Williams’ attention to the details of the text
was exemplary, the diction immaculate. In the former, harp and string solos
beautifully conveyed nocturnal mystery and temporary calm; in the latter,
percussive taps and slaps complemented the rhythmic fragmentation of the
vocal line, before woodwind and horns formed sonorous sustained tonal
clusters through which whimsical flourishes sputtered.

Ethereal string harmonics opened ‘I have raised and poised a fiddle’, wryly
mocking ‘music’s model: The music of the spheres’. Textual references to
Purcell and Arne triggered snatches of musical homage, and despite the
dense complexity and the frequent placement of the vocal line in the middle
range, Williams’ baritone spoke clearly. The haunting historic shadows of
‘One looks for Eden in history, best left unvisited’ were only partially
pushed aside by the rollicking jazziness of ‘Useless to hope to old off’,
in which Davis skilfully balanced restraint and exuberance, holding the
cross-rhythms and splashes of colour coherently together. Eventually, he
drew in the carefree miscellany to a point of stillness – ‘The final kiss’
– marked only by the harp, before a percussive burst mimicked the last
line’s ‘Tight pressure of hands’. Quirky but never flippant, The World Was Once All Miracle makes a persuasive case for its
quest.

Works by Edward Elgar framed the programme. To begin, soprano Emma Tring
joined Williams in excerpts from The Starlight Express (1915).
Elgar’s incidental music for Violet Pearn’s play, based on Algernon
Blackwood’s fantasy novel A Prisoner in Fairyland, represents the
composer’s most substantial work for the stage. Here, seven songs nestled
within the instrumental fabric, beginning after the gentle orchestral
introduction with the Organ-Grinder’s plea ‘To the Children’. ‘O children,
open your arms to me,/ Let your hair fall over my eyes;’ sang Williams with
gravity and earnestness, before showing the tramp’s derision for the adult
world with a bitter flourish, ‘They laugh all my fancies to scorn’
, pointedly underlying the song’s depiction of the divergence between the
worlds of adult and child. The instrumental waltz which followed sparkled
like the stardust that the children in Blackwood’s tale collect from the
constellations to sprinkle on the adults who have become ‘wumbled’ – and
like the twinkle in the eye of ‘The Blue-Eyed Fairy’. Williams and Davis
effected a perfectly judged rubato of wonder – ‘So if such a child you
should chance to see …’ – before the spirit of carefree youth which the
Fairy’s spell will bestow coursed towards the closing wave of the timpani’s
magical wand.

A poignant violin solo, beautifully played by guest leader Igor Yuzefovich,
preceded Emma Tring’s glossy, gleaming rendition of the dawn-song, ‘We
shall meet the Morning Spiders’, as Davis’ fluttering fingers (he conducted
the whole programme without a baton) conjured staccato featheriness from
woodwind to depict the delicate nests of the ‘fairy-cotton riders’.
Williams relished the text of ‘My old tunes are rather broken’, creating a
powerful sense of whimsy, ‘When I caught the children dancing/ With the
Sprites beneath the moon’, as the Organ-Grinder looks back with nostalgia.
Tring and Williams came together for the Finale, ‘Hearts must be soft-shiny
dressed’, the joyful ‘unwumbling’ of the adults – Haystack Woman, Sweep,
Lamplighter, Dustman, Gardener – triumphing with the carolling organ, brass
and bells of ‘The First Nowell’.

If The Starlight Express’s innocent fantasy of a world of
mutual care and understanding between all people in offered Elgar a
slightly indulgent, though entirely sincere, refuge from more disturbing
realities, The Spirit of England (1915-17), which sets three poems
by Laurence Binyon, more directly confronted and communicated the distress
and loss of war. No one does Elgarian nobility and consolation more
persuasively than Andrew Davis. Steeped in the English music tradition, he
was able to draw forth both the blooming up-swellings of pride and the
tender quietude of compassion from Elgar’s score; I was reminded why he was
such a terrific conductor of the Prom’s Last Night celebrations during his
tenure as the BBCSO’s chief conductor (he is now Conductor Laureate of the
orchestra). Yes, here there was patriotism and pomp, but nostalgia and
compassion too, and the musical arguments were always dominant.

The oscillations between the male and female voices of the BBC Symphony
Chorus, and tenor soloist Andrew Staples, garnered excitement and courage,
spurred by a driving bass line in ‘The Fourth of August’. Staples sang with
ringing power and ardency, confidently astride the symphonic and choric
textures, capturing the eternal human hopefulness represented by images
such as ‘The see that’s in the Spring’s returning,/ The very flower that
seeks the sun.’ The melismatic plea, ‘Endure, O Earth!’, rippled with
embracing power.

Timpani, harp and pizzicato strings established a gentler courage at the
start of ‘To Women’, but Staples missed no opportunity to vivify the text,
impressing the image of hearts which ‘burn upwards like a flame/ Of
splendour and of sacrifice.’ with a surge of vigour. The high tessitura was
assuredly scaled: ‘For you, you too’ and ‘From hearts
that are as one high heart’ reached fervently upwards, and such emphasis
never disrupted the vocal lyricism. The interaction between soloist and
choir was expertly shaped, creating a mood of resolution which lingered in
the basses’ concluding pizzicato tread.

‘For the Fallen’ was sombre and dark, but never lost its underlying
momentum, sweeping forwards vigorously as ‘They went with songs to the
battle, they were young’, as Davis fingers slithered through the dotted
rhythms of the march. With the poignant reminder that ‘They shall not grow
old, as we that are left grow old’, the BBCSC showed that they can sing
with exquisite tenderness and well as stirring majesty; Staples’ avowal,
‘We will remember them’, was simple and true, echoed by the solo cello’s
expressive affirmation.

The march of the concluding stanza lifted us from despair or melancholy,
though, just as Elgar must have intended in 1916. While some of Binyon’s
text must not have been entirely to Elgar’s taste – and images of the
Germans as ‘prey to seize and kill’ and ‘Vampire of Europe’s waste will …’
feel awkwardly dated nowadays – The Spirit of England is a
powerful articulation of the ruinous waste and painful aftermath of war. As
present-day conflicts persist, we do well to remember its messages of both
courage and compassion.

Elgar: The Starlight Express – excerpts; Raymond Yiu: The World Was Once All Made Miracle (London premiere); Lilian
Elkington: Out of the Mist; Elgar: The Spirit of England
.