Miskimmon has shifted the action forward to the 1950s in order, she
explains, to use the ‘fake GI bride industry’ that was kick-started by the
1945 War Brides Act and the 1952 Immigration Act, which enabled American
serviceman to bring foreign brides home to the US to underline the darkness
of the power, to underline the exploitative darkness of the power dynamic
between Lieutenant B.F. Pinkerton and Cio-Cio-San.

So, the action begins in the ugly office of Gozo’s ‘marriage-broker’
business – though the catalogues of oriental beauties from which the GI’s
make their choice and the clanging chink of silver in the cash register
suggests that ‘brothel’ might be a more apt term. Designer Nicky Shaw
evokes a drab seediness: higgledy-piggledy filing cabinets are illuminated
by the intermittent flash of red and blue neon – ‘Hotel’, ‘Tattoo’ – and as
cheap confetti is strewn brusquely over the conveyor belt of brides, the
strings’ violent stabs in the overture take on a discomforting resonance.
Flip-charts spin and cine-reels roll, instructing Eastern ingÈnues how to
be a good American wife and embark on a journey to a new life in the US,
where they can live the Dream. There is a disturbing double displacement:
the Americans have callously colonised Nagasaki, and then coerced and lured
the Japanese into their own world. Nowhere is this more apparent than when
Cio-Cio-San is forced by her new husband to fling her wedding bouquet over
her shoulder, as confused as the wedding guests who dart aside to avoid its
fall. 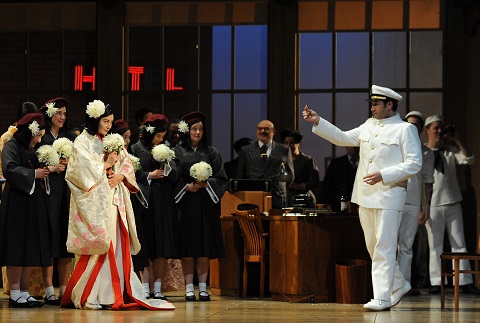 It leaves a horrid taste of merciless mercantilism, which makes Miskimmon’s
point. More problematic is that the shift of locale makes a nonsense of the
libretto’s frequent references to the house on which Pinkerton has just
taken out a 999-year lease. An estate agent’s cardboard model is an attempt
at remedy: and, the miniature abode does underline that paper
walls can be shifted just as easily as deeds can be undone and knots tied
torn asunder. It’s all a game – Pinkerton lounges insouciantly with his
feet on Gozo’s desk – and Cio-Cio-San is a plaything, a doll. This
‘unreality’ is emphasised during the marriage ceremony by the division of
the stage, as the bored US contingent lean impatiently, stage-left, while
opposite, Cio-Cio-San’s family strive to earnestly engage in the
‘ceremony’.

The arrival of Oleg Budartaskiy’s dark-hued and threatening Bonze upsets
the proceedings. When Pinkerton has angrily dismissed those who condemn his
bride for betraying the gods of her ancestors, they are left alone to spend
their wedding night in the broker’s office, and at this point one’s
credulity is stretched. The cine-reels starts up, a visual accompaniment to
their duet, but despite their words of love, the images of boats bearing
joyfully waving Japanese brides past the Statue of Liberty are more
reflective of Butterfly’s hopes than any intention on Pinkerton’s part.
‘Night is falling’ she sings, and the shop-blinds rise to give us a glimpse
of golden stars blinking in the blackness, but the sentimentality is
short-lived, and the gleam of celestial bodies is rapidly extinguished by
the toxic glare of neon. 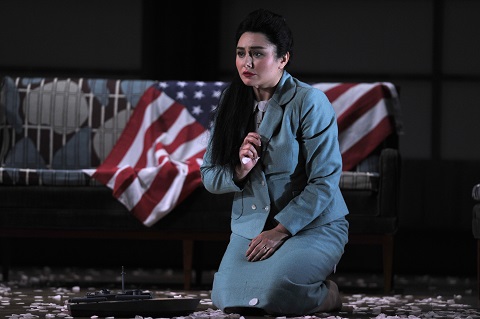 The discomforting tensions of colonial presence pervade Act 2 also, where
Butterfly is found living in an ‘American house’: Pinkerton has left her
the monthly rent, some chic upholstery, a television set and a
Stars-and-Stripes, and so keen is Butterfly to impress upon visitors her
all-American up-to-datedness, she dresses herself in the unflattering,
green two-piece suit which was her husband’s inappropriate wedding gift,
files her nails and powders face while watching the box, legs pertly
crossed at the knee like any good American housewife. But, beyond the sh?ji
screens the falling sakura blossom adds a note of wistfulness, evoking
tears, the passing of time, and the star-dust of Butterfly’s dreams of
Pinkerton’s return.

The strength of Cio-Cio-San’s fantasies is highlighted during the Act 3
intermezzo when, as she sleeps before her ‘husband’s imminent arrival, her dreams are writ large. At
the start of Acts 1 and 2, the front-drop of aquamarine above dense
crimson, slanting, slashing brush-strokes – evoking the Japanese sun,
passion and blood – fades to ashen blackness; but in Act 3, some colour
remains and through the filmy gauze Butterfly’s memory of being carried
over the threshold between worlds by Pinkerton, into the room in which
their son, Sorrow, was conceived, is enacted in a dream sequence. The
moment is beautifully lit by Mark Jonathan, as night turns to day, making
Pinkerton’s observations that the room is just the same, but filled now
with cold desolation, all the more chilling.

Miskimmon’s intent to push her, not unreasonable, concept results in some
non-sequiturs, and these are exacerbated by some questionable movement
direction. In Act 1, when Butterfly impassionedly challenges Pinkerton
about the fate of her lepidopteral namesakes in the US, why does he climb
the library steps as he replies that the insect is pinned to ensure that it
will not escape – he will hold her forever? Then, in Act 2, why does Simon
Mechlinksi’s Prince Yamadori arrive in a jeep powered by the push-power of
members of the US marine service, sheltered by be-suited girls wielding
sun-coloured parasols?

There is some hammy acting, with a fair bit of swooning, arm-flapping and
rushing about in anguish, anxiety or ardour. Sorrow, already lumbered with
a depressing name-label, is his mother’s confessor and chief exhibit, and
witness to her quasi-hysteria, violence – when Gozo spreads rumours about
the boy’s parentage, she attacks him with her stiletto heel – and
preparations for suicide. One would be surprised if there were not
considerable psychological problems ahead, however kind and loving Ida
R‰nzlˆv’s scarlet-suited Kate Pinkerton proves to be. But, the boy’s joy
when he learns of his father’s return is neatly captured by young Rupert
Wade: he is swept up in his mother’s and Suzuki’s optimism and relief,
donning his father’s cap and circling the television set to practise his
marching and naval salutes, as his mother gathers cherry blossom in the
hammock of a US flag and sweeps it with profligate joy around the rooms of
her American house. 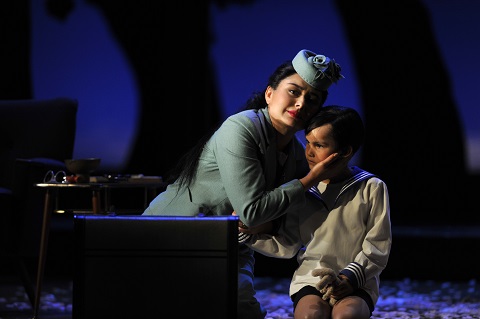 Olga Busuioc’s Cio-Cio-San is the towering vocal and emotional linch-pin of
this production. There is a delicacy and cleanness about the Moldovan
soprano’s sound that shines with the naivety of adolescence, but we quickly
appreciate that there are emotional depths which are ripe for igniting –
when she snatches back her father’s sword from the disrespectful Pinkerton,
and when she sings of the souls of her ancestors. In ‘Un bel dÏ vedremo’
she sings directly to us, pulling us into her own dream: both Butterfly’s
innocence and the clarity and directness of the vocal line compel us to
believe in her hopes, and as the aria proceeds it is infused with ever
greater richness and colour.

Joshua Guerrero’s Pinkerton makes less of an impression: musically he is
ardent when required, but dramatically this Pinkerton is rather flimsy.
Flippant and egotistical at first, he does seem disconcerted perhaps by his
bride’s age and by the genuflecting hordes paying homage to Butterfly’s
‘lord’; when they are married he is startled by her fragility and purity,
which doesn’t betoken emotional depth, and his final avowals of guilt and
regret don’t carry much weight.

Carlo Bosi’s Gozo is a slimy piece of work, counting his takings in full
glare of his dupes, and whipping out a photo-chain of alternative brides
for the rejected Yamadori. Michael Sumuel is a humble, hesitant somewhat
ineffectual – though vocally sensitive and shapely, Sharpless at first,
slightly bewildered by the crossing of his own moral thresholds. But, he
rises heatedly to vigorous anger when he reminds Pinkerton of his prophecy
that nothing good would come of playing with honest, guileless trust and
love.

last year; we were ever aware of DeShong’s presence, even when she was
silent, and the slightest of vocal utterances intimated great strength of
character, feeling and loyalty, qualities released by the expansive of her
vocal contribution in the Act 2 flower duet and in her Act 3 exchanges with
the Pinkertons where her mezzo-soprano plummeted with real pain.

Conductor Omer Meir Wellbeir focused on the murmuring melodic delicacy of
the woodwind and harp and avoid the temptation towards melodramatic
tastelessness. The off-stage choral humming was atmospheric, though the
Glyndebourne Chorus were denied some of the expressive majesty of their
entries by the set design and concept. The former also led to some muddled
outside-inside wanderings in Acts 2 and 3: Butterfly’s ritual suicide takes
place ‘outside’, which creates a distancing that persists when her son
opens his present from his father and plays with a toy boat, oblivious to
the fact that he mother is dying behind him, as Pinkerton’s cries,
‘Butterfly!’, float in to little emotional effect.

Fortunately, this production has Olga Busuioc to restore its dramatic,
emotional and moral heart, and to ensure that the discomforting darkness
does not lack a guiding light.