Does the nature of a venue shape one’s experience of a work, or is it
inconsequential? Obviously, there are practical factors that may influence
one’s response – the acoustic, sight-lines, distance between audience and
performers, even the degree of physical comfort or discomfort – and
external atmosphere can certainly seep and diffuse into one’s inner
experience. Lowering skies over a whipped up North Sea, the bite of a brisk
breeze and the salty tang of the ocean might melt away the years between a
present-day fishing town and George Crabbe’s early nineteenth-century
Borough.

I mention these matters because Cave, a new opera by Tansy Davies,
with a libretto by Nick Drake, produced by the London Sinfonietta in
association with The Royal Opera, led me to reflect on issues relating to
site-specific performances, such as the relationship between musical and
architectural form, the dialogue between form and function, the potential
longevity of works designed for specific places. 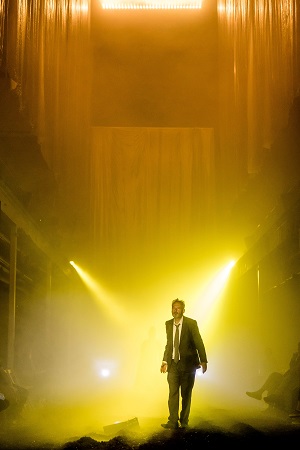 It’s hard to imagine a more fitting venue in which to present Cave than Printworks, the former south-east London home
of a newspaper printing-press which has been transformed into an events
venue comprising six cavernous spaces, arranged over multiple levels
connected by a corridor-maze. It was once Western Europe’s largest print
facility, spread over 119,200 square feet, and entering into its vastness –
the cathedral-like ceilings arch up into infinite darkness, strange
slippery echoes take one unawares, lights starkly challenge and shadows
flicker hauntingly – was slightly disorientating. The walls had been hung
with shifting white fabric and a river of floor-lights guided us through
the darkness into this immersive twilight zone, the very fabric of which
seemed woven into Cave, a near-future dystopia of post-apocalypse
barrenness and loneliness.

Drake’s libretto – or perhaps poem would be a better term – is set in a
world devastated by climate change and communicates the grief of a father
who enters an underground spirit world in a quest to connect with his
daughter, Hannah, who is ‘lost’. Dead or simply missing, it’s not clear.
Indeed, uncertainty seems the only certainty in this half-world. As Davies
explained in a recentinterview, “ Cave is about Skin. The skin between life and death, the skin
between humans and animals, the relationship between father and daughter.
The cave goes through several phases of being imagined by the father whose
lost his daughter and he’s remembering her. There’s a sense of things being
apparently there, but not there. Half-there you might say.”

Subsumed into the darkness of the cave, the father reminisces on the
world’s tragic tipping-point and mourns ‘the extinction of colour’. His
dreams of re-birth, of enchanted forests, are severed by the roar of
war-planes. Shadows tower threateningly as he is engulfed by a hysterical
fear which destroys language, until one shadow transforms into a tree which
provides peace and shelter. And, it is here, through memory, that he
re-connects with Hannah, whose tattooed arm attests to her ‘courage’ as
clearly as her words convey the certainty of her faith in regeneration.
When she departs, a storm breaks, literally and in his heart, but the water
is restorative and forms a running river which bears him into the future,
to “begin again/ With your voice/ In mine -” 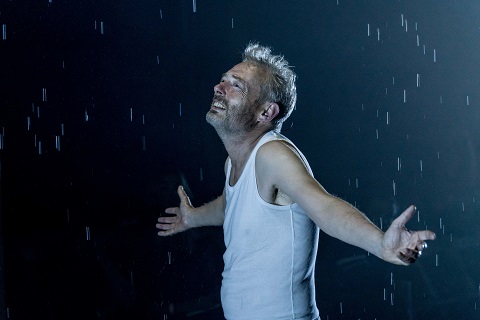 Cave
was inspired by visits which the composer and librettist made to the Cave
of Niaux in Southern France, on the floor of which is a dry river bed,
which led them to explore the historic significance of caves for humans, as
ritual and communal spaces for sharing culture and knowledge. If there is
no ‘plot’ in a traditional sense, and equivocation and liminality are at
the opera’s core, then there is certainly a clear ‘message’, that nature is
a healing force in the face of human suffering and despair. Davies
comments, “Cave is also about the relationship we have with
nature. The performance isn’t just about grief and loss. It’s about gaining
through wisdom.”

It’s a message that was communicated too in Davies and Drake’s first
collaboration, Between Worlds (premiered at the Barbican in 2015),
a similarly poetic drama which placed the events of 9/11 within human
experience and suffering. Occasionally, though, Drake’s ecological
evangelism is expressed with a little too much blunt ideological fervour.
Hannah avows, “I want to do something/ About the disaster we’ve made”, just
as Davies declares that she and Drake “both want to try and achieve a
better world”, genuinely worthy sentiments which might seem naively
idealistic, just as Hannah’s condemnation of “This insane exploitation/ Of
people and Nature -/ For what? So we can have 4x4s?/ And holidays in the
sun/ And peaches in winter?” and her ‘solution’, “We have to imagine/ A
humbler way to belong together -”, seems simplistic in the face of the
depth and complexity of modern-day challenges.

Despite this, director Lucy Bailey’s presentation of this one-hour opera
was as compelling as Davies’ score, which crept delicately and hauntingly
above and around the audience, was hypnotically beautiful. Designer Mike
Britton placed the audience on tiers which stretched along an extended
central galley, a mulchy undergrowth of chippings and mud, the ends of
which were bathed in lighting designer Jack Knowles’ mood-changing colours.
Shadows shifted and loomed, before slipping into the surrounding darkness. 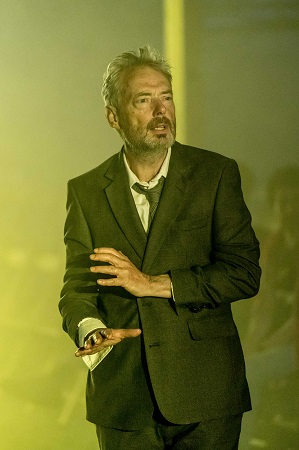 Conductor Geoffrey Paterson and six members of the London Sinfonietta were
assembled at one end, from which floated Davies’ delicately embroidered
sound-scape. As the low resonations of the bass clarinet and contra-bassoon
swirled around the harp’s high pure intonations, embraced by electronic
stutterings and swoons, it was as if Printworks had become a
repository of a primordial language which was both intuitive and
imaginative, brutal and beautiful. I’m not sure that the music
‘articulated’ the words in any direct way but it powerfully evoked another
world, beyond words, as Davies herself described: “In Cave we
discover a portal into an ancient belief-system where humans understood
life through interacting with nature much more.”

More than the music’s drama and delicacy, though, it was the performance of
tenor Mark Padmore as the questing protagonist which made Cave so
gripping. Padmore’s commitment, vocal and physical, was astonishingly
intense and unwavering, from his first dishevelled entrance, clutching a
briefcase which he would later set alight, to the transfiguration of his
departure via the lost river. Whether lyricising or crooning, speaking or
howling, clapping or whistling, every utterance was delivered with care and
sensitivity; and, the purity of his voice was immensely touching, creating
credibility and empathy for a character whose situation and intent might
seem distanced from our own experiences. One could only admire the stamina
and focus required to sustain this throughout the man’s soul-changing
experiences – which included stripping off his tatty suit, being drenched
by the storm, and curling up in the damp compost. 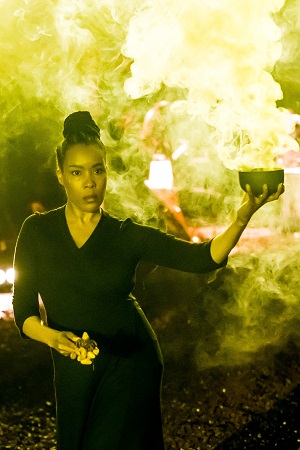 As Hannah and the ‘Voice’ which echoes through the cave and in the man’s
memory, mezzo-soprano Elaine Mitchener demonstrated vocal versatility,
smoothly stretching across registral leaps, her enunciation of the short,
often speech-like melodic fragments fluent and natural. Akilah Mantock
danced gracefully as the young Hannah who runs through the man’s memories.

Emerging from the enveloping intimacy of this performance and stepping onto
the mundane streets of Canada Water, still sunlit in the early evening, was
as unsettling as entering Printworks’ vast cavern had been one
hour earlier. Davies describes her creative engagement with the venue as
being like ‘playing a duet with the space’; site and sound had truly
communicated as one.

Tansy Davies: Cave (with a libretto by Nick Drake)