The Zambello Ring is big, and particularly Gˆtterd‰mmerung is huge. There is a lot of video — Wagner’s musical interludes are always fully illustrated. Some of this surprisingly successful video was newly created for this revival by S. Katy Tucker, earlier created videos were by Jan Hartley.
There is a lot of architecture — abandoned warehouse buildings of some post-industrial era, monumental civic structures, crumbling elevated cement roadways, there are tons of plastic bottles that litter a dried up river bed. In this re-mounting of the 2011 San Francisco Ring the sets designed by Michael Yeargan have become fully absorbed into the telling of the saga, and fully achieve Wagnerian Gesamtkunstwert where words and music are one with sight, an achievement to be savored as it is indeed rare.
The Donald Runnicles Ring is big, well exploiting the full resources of the eighty-nine players of the admirable San Francisco Opera Orchestra. Seated on the left side of the theater the magnitude of sound flowed gloriously across the expanse of the theater to fully absorb me into its myriad of leitmotivic detail and massive ensemble. The Wagnerian Rhine, its reality and its myth, was fully present in the Runnicles reading.
The signature image of the Gˆtterd‰mmerung is the massive computer mother board and the three norns who plug and replug cables until one snaps in the famous orchestral clap and we enter the pitiful world of the Gibichungs (FYI fourth century Burgandians) whose leader is the unmarried Gunter, his sister Gutrune is also unmarried. Alberich’s son Hagen manipulates these two weak creatures into disastrous marriages to further his goal of becoming lord of the ring and possessor of the massive hoard of gold. 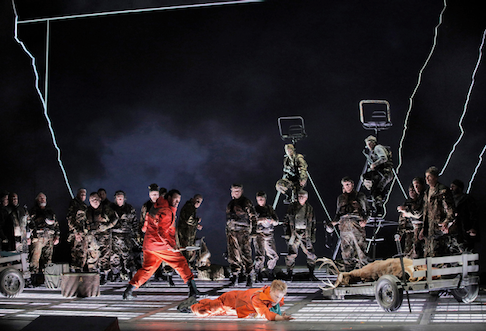 Hagen kills Siegfried. The Ring production costume designer is Catherine Zuber.
San Francisco Opera’s house bass Andrea Silvestrelli sang Hagen. Mr. Silvestrelli’s extraordinary height plus his dark, rough and powerful voice gave a strong presence to this cunning personnage who cruelly orchestrates the marital disasters. Though you might wish for more elegance of sound and subtlety of character, Mr. Silverstrelli certainly did the job, playing the role to the hilt.
San Francisco Opera house baritone Brian Mulligan sang Gunter. Mr. Mulligan possesses a very beautiful, Italianate voice without supplying a persuasive presence. This worked for establishing a certain character for Gunter though you might have wished for a less lyric voice and a more forward personality. Mr. Mulligan did succeed in making Gunter pathetic, evoking my reluctant sympathies for such a weakness.
We first encountered mezzo soprano Jamie Barton as a contemptuous Fricka. In Gˆtterd‰mmerung she sings Waltraute, Br¸nnhilde’s valkyrie sister who comes to Br¸nnhilde to beg her to return the ring to the Rhine, to break its curse and perhaps save the gods. It is our last reference to Wotan before his annihilation in the opera’s last moments. Unfortunately Mlle. Barton was unable to achieve the angst and the gravitas that might have moved Br¸nnhilde to save her father. The complexity of the pathos of this scene were lost in its pallid reading. 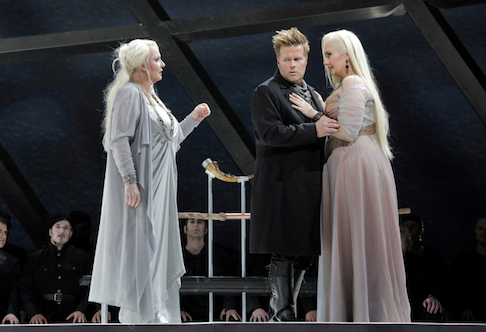 Siegfried and his two brides. Gutrune (right) sung by Melissa Citro
Soprano IrÈne Theorin perservered through it all. In firm Br¸nnhilde character she ferociously denounced her marriage to Gunter, and together with Hagan and Gunter she swore revenge on Siegfried, this spectacular marriage scene set in the monumental architecture of the Gibichung Hall. She remained in equal vocal radiance for her immolation. Tenor Daniel Brenna’s Siegfried perservered through it all to make, finally, his scene with the Rhine maidens one of the memorable moments of the entire Ring. Maestro Runnicles brought earth shattering pathos to Siegfried’s death, freezing for eternity the complex emotions of this climactic moment.
After much sublime poetry over sixteen or so hours of one of the finest Rings I have ever seen, the immolation of Br¸nnhilde and the gods of Valhalla was strangely prosaic. Inexplicably, or maybe as victimized sisters Gutrune, Siegfried’s wife, stood by Br¸nnhilde’s during the valkerie’s invocation to the ravens (unseen) to fly to Valhalla. The female chorus joined the Rhine maidens and Gutrune on stage for Br¸nnhilde’s horseless immolation. The radiant calm of the Ring’s final music was captured by the Rhine maidens energetically swirling great swathes of gold cloth.
Michael Milenski