Would it not be a typically sentimental coping mechanism adopted to avoid confronting the questions – artificial yet profound, indeed profound through artificiality – it asks of its characters and its audiences alike? If one does not at some level, perhaps the most important level of all, find that Così goes deeper and further than Tristan, then one most likely has not understood either. Given a tragedy without catharsis, a tragedy in the clothes, surpassingly elegant and ravishing, of comedy: sometimes one might ask who needs an opus metaphysicum at all? (We might actually need it in order to recover.)

At any rate, absence had certainly made my heart grow still fonder when it came to Opera Holland Park. Not having been able to visit last summer, I returned to what may well be the most completely successful show I have yet to see and hear there. There is certainly I would put above it, quite a claim, given that we are dealing with Mozart, the most difficult of all composers to perform. There is nowhere to hide, on stage, in the pit, nor indeed in the audience. Nor should there be. Moreover, one had the sense, whether in production or in musical performance – the distinction is far from distinct – that this ambivalent, ambiguous, existentially devastating drama was being enabled, with the lightest of touches, to speak for itself. That does not happen by itself; there is no room for ‘non-interpretation’, for some illusory ‘original’. Yet nor did it ever seem that something was being inflicted on the work. There is room for critique, whether in words or in performance, yet sometimes, as here, the work is so rich that it both offers its own and, perhaps, renders it beside the point. 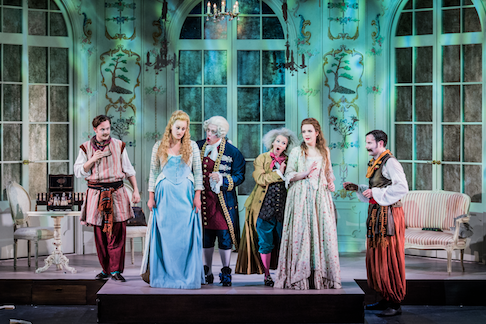 For what is Così, if it is not a musico-dramatic laboratory, a game whose results we should rather not know, and yet can never quite un-know? We see that in Oliver Platt’s production: not spelled out, ‘in a laboratory’, but actually more or less where it ‘should’ be, in an eighteenth-century setting, in which detail is everything. The more we look at what might seem a straightforward, ‘traditional’ production – and, in a sense, is – the more we see – and hear. The chorus, which like us watches proceedings and occasionally participates, is, from the start, a participant and perhaps a critic. It is not quite the Neapolitan ‘daily passeggio’ of which Leopold Mozart wrote, in a letter quoted by Helen Wallace in the programme, for that was perhaps too obviously theatrical, at any rate too bound to a particular stratum of the social hierarchy: ‘in a few hundred carriages the nobles go out driving in the afternoon until Ave Maria to the Strada Nuova and the Molo.’ These seem largely to be more ‘ordinary’ people, but what is ‘ordinary’? They are like us, perhaps, but they also remind us that we need not be ‘like’, or at least identical to, the principal characters on stage to learn from them. And so, when one looks more closely, one notices an apparently ‘male’ member of the ‘chorus’ in apparently ‘female’ dress. (S)he brings no particular other attention to himself or herself. There is no obvious plotline, no ‘distraction’, as some would have it, rightly or wrongly; there is also no obvious exit strategy for us on heteronormative or other grounds. Così fan tutti/e; or, mutate nomine, de te fabula narratur.

All, however, is not always quite what it seems. For the commedia dell’arte painted faces of Ferrando and Guglielmo are there to start with: visitors, perhaps, from beyond, yet also in need of external transformation – in Tristan, it would be a potion – in order to reveal themselves. Interactions between characters, like those between different chemical elements, are minutely observed, rendering us experimenters of our own, again whether we like it or not. (At least, so long as we watch and listen.) One of the problems some people, not unreasonably, seem to have with this opera is not always appreciating the level of parody, verbal and musical. And so, when Fiordiligi stands on a chair to assume her pose for ‘Come scoglio’, that cruel, loving, and in every sense ravishing seria parody, she initially falters, almost falling (not, I hasten to add, vocally). The watching lovers laugh, and she resumes. All is not quite what it seems, or perhaps it is. That is largely up to us, yet within the framework constructed – or rather within the different, intersecting frameworks constructed, by Alfonso and Despina, by Mozart and Da Ponte, and by production and performers; as well, of course, as that constructed by our own experiences, thoughts, and emotions. We are led to deconstruct that terrifying final ‘moral’ ourselves, Mozart’s brusque neo-Classicism the only possible response to Da Ponte’s seemingly straight hymn to reason. If we do not think about, do not feel its numerous contradictions, we have no one to blame but ourselves – not unlike the characters themselves. Is all perhaps precisely what it seems? Yes and no.

For it is Mozart above all who renders this opera such a necessary agony. And it is the musicians who – with the greatest respect to truly excellent work from everyone else involved, whether in the theatre, behind the scenes, or somewhere in between – who ultimately bring that into life. The City of London Sinfonia offered us gorgeous musical sado-masochism, woodwind one might almost literally have been willing to die for, strings incisive yet far from without warmth of their own. Dane Lam’s tempi began on the quick side, never unreasonably so, yet indicative of an approach one might too readily have taken to be partial. For, as the drama progressed, as the characters achieved greater delineation, so did temporal differentiation. Lam’s was a reading that knew where it was going, and thus could afford to take time on the way – in, for instance, a heartrending ‘Un aura amoroso’.

Not that that would have been heartrending without an estimable Ferrando, of course; that was not, happily, something we needed to put to the test, Nick Pritchard balancing with apparent ease the demands of line and variegation. So too did Nicholas Lester’s Guglielmo, the bitterness of his disillusion moving indeed, his ‘journey’ perhaps the greatest of all. Eleanor Dennis and Kitty Whately likewise proved almost infinitely capable both of sisterly affinity and dramatic disentanglement. So many attributes – sorrow and joy, honour and temptation, simplicity and complexity – were revealed as sides of the same experimental coin. Lines, unadorned or subtly ornamented, exuded both clarity and warmth. We knew them, and yet did not. Sarah Tynan’s Despina was very much the musical catalyst, her cynicism and her sense of fun both vividly portrayed. If Peter Coleman Wright’s pitch was sometimes a little approximate, he brought important dramatic truths to his portrayal of Don Alfonso – perhaps not unlike Francesco Bussani, first in his line. The chorus, well trained, by Richard Harker, could hardly have done more to bring their roles, individual and collective, to life.

There is method in the madness one feels at the close; there has to be. And yet, quite rightly, there remains mystery too. Or, in the ruminations of another operatic character, forced to confront truths of existence he might rather not – at least not too often: ‘Ein Kobold half wohl da:/Ein Glühwurm fand sein Weibchen nicht; der hat den Schaden angericht’t.’ Was Sachs just rephrasing the question? Probably. Are we? Almost certainly. That does not, however, mean that we are not confronting it, that we need not do so. Mozart leads us to Wagner, as well as Wagner to Mozart.