In fact, she herself has provided the ‘answer’ to the opera’s dilemma, and
this beautiful production by Tim Albery for Garsington Opera – a
co-production first seen at Santa Fe in 2016 – which is by turns flippant
and serious, frivolous and serene, confirms the truth of the Countess’s
earlier words: “denn hier zu w‰hlen, hiesse verlieren.” To make a choice,
would result only in loss.

The opera is set in 1777, when Marie Antoinette has just been crowned Queen
of France and Gluck is undertaking his ‘reform’ of opera. In a luxurious
chateau near Paris, the Countess is worshipped by a composer, Flamand, and
the poet, Olivier, who dispute the relative importance of words and music,
and ask the Countess, whom they both love, to choose between their
respective arts – and, by implication, between them. This love triangle
takes place within a salon populated by other artists: a renowned actress,
Clairon; an impresario, La Roche (a Straussian alter ego, based also on
theatre director Max Reinhardt); the Count (the Countess’s wealthy
brother), an amateur actor who is more interested in rehearsing romantic
scenes with Clairon than in debating aesthetic theories; two Italian
singers; and Monsieur Taupe, a prompter. 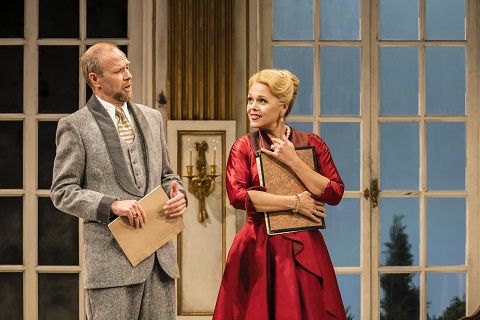 Pianist Glenn Gould admired Capriccio for its ‘gallant poise and
serene literacy’, but others have found it more difficult to experience the
work without considering the circumstances in which it was composed. As
Alex Ross noted in The Rest is Noise, ‘On August 3, 1941, the day
that Capriccio was finished, 682 Jews were killed in Chernovtsy,
Romania; 1,500 in Jelgava, Latvia; and several hundred in Stanis?awÛw,
Ukraine. On October 28, 1942, the day of the opera’s premiere in Munich,
the first convoy of Jews from Theresienstadt arrived at Auschwitz-Birkenau,
and 90 percent of them went to the gas chamber.’

Some have condemned the opera as a piece of Kunstegoismus, and
declared Strauss guilty of solipsistic indifference to, or at best naÔve
unawareness of, the political implications of art, even during war. One
such was Paul Hindemith, whose music was condemned as degenerate by the
Nazis and whom Bertolt Brecht had warned, ‘music is not a Noah’s ark, in
which one can escape the flood’.

Director Robert Carsen, in his 2004 production for the Palais Garnier in
Paris, set the drama in Occupied France at the time of the opera’s
composition. At the Edinburgh Festival in 2007, Christian von Gˆtz’s
production for Opera Cologne confronted the audience with a drop curtain
depicting German troops marching down the Champs ElysÈes.

Is Capriccio an escapist fantasy? If so, perhaps one might forgive
the elderly Strauss for this active reminiscence on and review of a life’s
work in which he deliberately casts his gaze inwards, retreating to an
ivory tower of aesthetic theorising, rather than facing outwards to
acknowledge the unpleasant reality of the present. But, it’s worth
remembering that the opera’s origins began to grow eight years before the
Munich premiere in 1942. When Stefan Zweig, the librettist of Die schweigsame Frau, was urged by Strauss to come up with another
libretto, he wrote, at the end of January 1934 to say that the following
month he would be in London to undertake research in the British Library on
‘all the libretti that the Abbe Casti wrote for Pergolesi who, second-class
musician that he was, could not do justice to the great charm and the
perfect comedy style of these texts’. In August that year, he mentioned
Casti’s libretto for Pergolesi’s ‘Prima la musica e poi le parole’, and the
seeds of Capriccio were sown.

Moreover, the original setting similarly preceded the turbulent and bloody
years of the French Revolution and the Terror. Who’s to say that in Vienna
1942, in the midst of destruction and horror, art might not have seemed the
only way to remind the world of its own humanity? Might Capriccio
be not irresponsibly apolitical but rather ‘political’ in the broadest
sense?

Director Tim Albery and conductor Douglas Boyd certainly think so, as Boyd
explained to me in a recent

interview. Albery and his designer, Tobias Hoheisel, have updated the action to the
years just after World War II, locating the action in a wealthy
philanthropist-patron’s modernist house, the rectilinear regularity, pure
colours and clean lines of which recall the architectural aesthetic of Mies
van der Rohe. Servants in livery, both modern and traditional, stand erect
in spacious vestibules left and right which frame an exquisite replica
rococo drawing-room – an exuberance of gilt, glass and ornament, the folly
of the hostess who reveres the eighteenth-century. 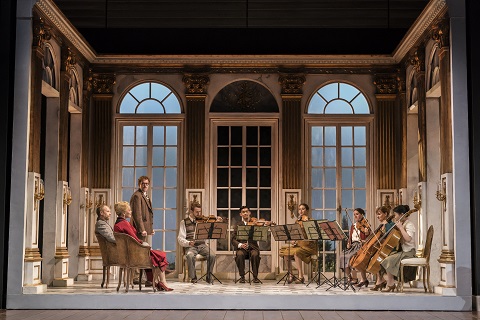 In the light of Albery’s theatrical conceit, it seems both fitting and
ironic that Mies van der Rohe’s fundamental aesthetic principle was that a
building should be an expression of its era and materials: ‘I am not
interested in the history of civilization. I am interested in our
civilization. We are living it. Because I really believe, after a long time
of working and thinking and studying that architecture … can only express
this civilization we are in and nothing else.’

On the opening night at Garsington, the enchantment which magically merges
two historical epochs began with the first notes of the opening Sextet,
performed by two members of the Garsington Opera Orchestra and four
students from the Royal Academy of Music, and climaxed in the closing
moments, when this interior oasis slid imperceptibly to the front of the
stage, bathed in glorious green and blue by lighting designer Malcolm
Rippeth, carrying us beyond ‘history’ and into timelessness.

There is no gesture or bustle during the Sextet: the characters, like us,
take their seats and listen to the music and the questions that it poses,
suggesting that the opera is not so much a denial of reality but a renewal
of essential human dilemmas and values.

Albery’s drama is not all abstract theorising, however; there is plenty of
self-referential eye-brow raising as the characters complain that it’s
fortunate that the music obscures the words in opera, for it saves one
having to fathom out nonsensical plots, and in any case the words are
banal. The vigorous conversations are companionable and invigorating, and
should vehemence risk escalating into violence, civility – and the
Countess’s diplomacy – is there to pull things back from the brink,
something that modern politicians would do well to heed.

The conversational ease was complemented and enhanced by Boyd, who captured
the transparency of the densely motivic score, allowing both the words to
be heard without undue effort and the multitude of instrumental motifs to
make their mark lightly but lucidly. At moments where Strauss’s own voice
in the debate seems to slip to the fore, the music seamlessly blossomed with
sumptuously impassioned emotion, but elsewhere the gracious dance forms of
the eighteenth-century which seem to underpin the musical discourse carried
the drama forward charmingly. 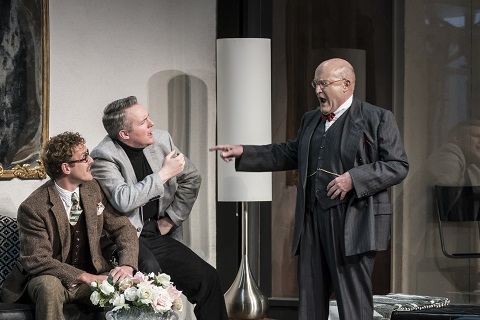 The temperature on stage does rise, when La Roche’s plans to stage
flamboyantly theatrical productions of the myths of the birth of Pallas
Athene and the Fall of Carthage are rudely abused, before the impresario
lambasts the pale, young aesthetes, ‘blasse ƒstheten’, with a persuasive
panegyric against those who condemn the old ways but create nothing new.

No one knows better than Andrew Shore how to exploit the power of
‘theatre’. His La Roche made a nonchalant entrance, a suave riposte to
Flamand’s vanity: as the Sextet spun its silken web, La Roche, sipping
champagne, strolled breezily across the drawing-room, in search of a
leather couch upon which he subsequently took a snooze. But, this does not
mean that Shore does not value or articulate musical or dramatic concerns.
He sang with vigour, directness and dignity, and La Roche’s arguments
communicated with conviction and cogency.

Albery’s choreographic details are engaging. Both suitors have charisma,
and they are neatly opposed. While the Sextet rhapsodises, Olivier flicks
through his poetry, making annotation; during Olivier’s eulogising, Flamand
browses through his score, conducting the music in his mind. Tenor Sam
Furness’s sweet-voiced Flamand is delightfully boyish and ardent, lost in
his music, inflamed in voice and heart by his passion for his dual muses,
music and the Countess. Baritone Gavan Ring effectively conveys the more
mature and worldly Olivier’s frustration – and despair, when he decries
Flamand’s setting of his sonnet which destroys the rhyme and metre –
resonantly surmounting Strauss’s high-lying lines with focus and
conviction. 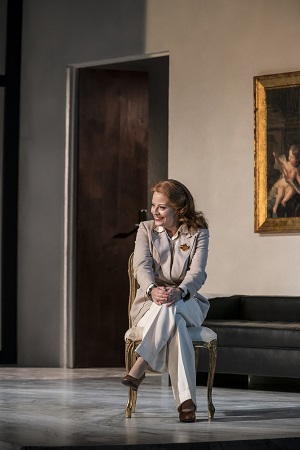 William Dazeley’s Count is a heartier baritone, blunt and confident,
communicating his aristocratic assurance with vigour. As Clairon, Hanna
Hipp wears her tailored cream trouser-suit with style; always in character,
she acted superbly and her rich mezzo added plushness and passion to the
conversational ensembles.

The Italian singers, Nika Gori? (soprano) and Caspar Singh (tenor) relished
the straight-faced parody of their bel canto divertissement, and
offered a playful counterpart to the company’s philosophising, as Singh
tried to stop Gori? quaffing too much champagne and eating all the cake.
Further fun was offered by a diverting interruption by the servants who,
taking their seats at the front of the stage during a work-break, reflected
wryly on their masters’ theorising – ‘I suppose now they will even want
servants to appear in their operas’. They, like Graham Clark’s Monsieur
Taupe – the prompter who’s gone to sleep on the job but who is the ‘the
invisible ruler of a magical world’ – know what goes on ‘backstage’.
Counter-balancing decorum was provided by Lowri Shone’s expressive ballet
and by Benjamin Bevan’s self-composed Major Domo. 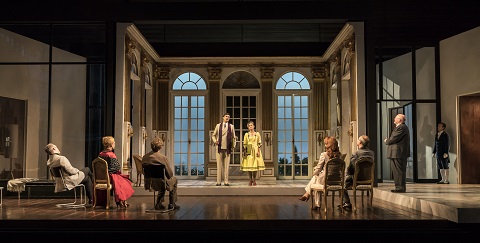 But, it is the Countess herself who presides in this opera, which she
commissions, inspires, judges and embodies. Miah Persson was the perfect
hostess: regal of bearing and manner, tactful but teasing. She sailed
sweetly and swiftly through the conversational snatches and soared through
Strauss’s expansive arcs with a blend of silvery limpidity and golden gleam
– matching the opulence of her own rococo recreation. When she declared, of
music, ‘It awakens dark dreams – ineffable/ A sea of awareness –
entrancingly beautiful!’, it was as if Strauss himself both spoke and sang. 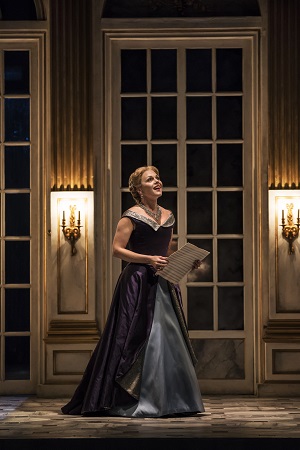 At the close the Countess’s sonnet declares the ‘truth’; the dilemma cannot
be resolved. We need both music and poetry, in opposition and in harmony,
and what is truly essential is, as the sonnet tells, love. And, so, Capriccio must end with a question mark, for the Countess can find
no answer ‘that is not trivial’.

The war threatened ‘humanity’ and also destroyed the manifest forms that
such humanity took – human culture; when the Munich Nationaltheater was
struck during an Allied bombing raid, Strauss wrote, ‘There is no
consolation, and, at my age, no hope.” In this regard, the ‘triviality’ of Capriccio is not apathetic, but redolent with pathos – a Romantic
cry for beauty and truth in a world of deceit, destruction and dread. Capriccio may, superficially, seem negligently inconsequential
but, as Tim Albery and Douglas Boyd show, it gives us hope.