Though dubbed the “American” Ring there is nothing specifically American about this Siegfried except maybe the Siegfried — Wisconsin born Daniel Brenna, a veteran of the Washington D.C. Ring who has sung Siegfried in Budapest, Karlsruhe and Dijon as well.
In this Ring we relate to Wagner’s greedy dwarfs Alberich and his brother Mime perhaps as gypsies more than anything else, though for San Franciscans they might also be the classic, wily homeless (not unlike some of those on my block). They were Wagner’s Jews.
Mime’s dilapidated caravan (a gypsy image) is in a truly desolate setting, thus we know Mime is a loner, all the better to protect Siegfried, his ticket to the gold he covets. The Mime of American tenor David Cangelosi is slinking, garrulous and bubbling over with deceit — just perfect. 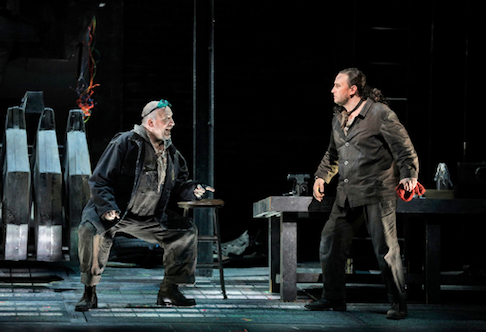 Falk Struckmann as Alberich, David Cangelosi as Mime
Mime’s bleak landscape is the only nature in the Zambello Ring beyond a few video references. There are no horses, there are no ravens, no forest bird, but there is Siegfried’s bear who playfully gallops onstage chased by his playmate Siegfried. The two creatures epitomize Wagner’s vision of unspoiled nature, and for Zambello tenor Brenner embodies a perfect portrait of wide and bright-eyed American innocence.
?
Of youthful visage and fine young voice tenor Brenna well embodied Wagner’s ideal of pure and indeed powerful nature. This innocence served him well through his almost joyful murders of Fafner and Mime and prepared him for his monumentally guileless encounters with the god Wotan and Wotan’s once immortal daughter Br¸nnhilde.
?
Bass baritone Greer Grimsley’s heroic Wotan wanders through Siegfried’s industrially littered world in search of its and his destiny, the outcome he himself has willed to Siegfried. He encounters Siegfried’s protector Mime, and he encounters his arch rival Alberich, known to us since the initial moments of Das Rheingold in the personnage of Falk Struckmann, an imposing German bass baritone who is also known as a Wotan. As Alberich Mr. Struckmann’s currency is gold, Wotan’s contracts forgotten. 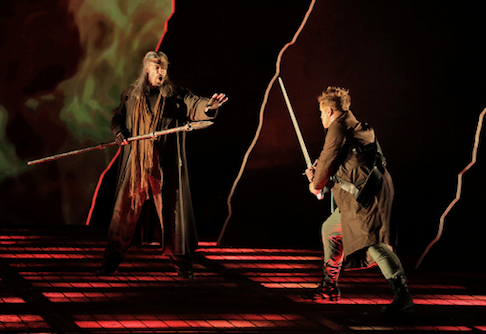 Greer Grimsley as the Wanderer, Daniel Brenna as Siegfried
Wotan encounters Brunnhilde’s mother Erde in a scene where he completely loses his cool, and finally Wotan encounters Siegfried who shatters his creator’s spear into which is imbued all social order. In all these encounters Grimsley’s Wotan exploits a humanity that is profoundly tragic and richly heroic, knowing finally†that he himself has willed his destruction. And tenor Brenna musters the magnitude of innocent force to equal Grimsley’s resigned humanity in this spellbinding scene created by these two gifted actors.
?
The Forest Bird is no bird but rather a simple human creature who normally might have been Siegfried’s first love. Destiny however leads Siegfried to Br¸nnhilde. This final scene of the opera is spellbinding as well, playing on the youthful and direct voice of Siegfried in contrast to the powerful, mature voice of Wotan’s fallen daughter Br¸nnhilde, Swedish soprano IrÈne Theorin. If at first the disparity of vocal production in this climactic scene is musically jarring, upon reflection it brilliantly sets up the tensions that will obsess us for the last, lengthy installment of the Ring.
A Ring given truly rich life by conductor Donald Runnicles and the San Francisco Opera Orchestra.
Michael Milenski