L’Ange de Nisida
is one of the middle knots in a cat’s-cradle of sources. In 1838,
frustrated by the obduracy of the Italian censors, Donizetti moved to Paris
and within just a few months his operas were being acclaimed in all the
capitals major theatres. Les Martyrs (a revision of Poliuto, which had been disallowed from the Neapolitan stage) was
admired at L’OpÈra, which had also commissioned Le Duc d’Albe; La Fille du rÈgiment had a successful premiere at the
OpÈra-Comique; a French version, prepared by Donizetti, ofLucia di Lammermoor opened at the ThÈ‚tre de la Renaissance in August 1839. No wonder Berlioz complained that Donizetti’s
presence in Paris was a ‘vÈritable guerre d’invasion’.

The success of Lucia led the ThÈ‚tre de la Renaissance to
commission a new work with a libretto by Alphonse Royer and
Gustave VaÎz – L’Ange de Nisida. Donizetti putLe Duc d’Albe on hold and began work on L’Ange de Nisida, drawing on the score of Adelaide, an
incomplete opera semiseria. The bankruptcy of the ThÈ‚tre de la
Renaissance put a spanner in the works, though; ever the pragmatist,
Donizetti drafted in Eugene Scribe to re-work the libretto, set about
adapting the score of L’Ange de Nisida, added a little music from Le Duc d’Alba, and La Favorite was born. The latter was
premiered on 2nd December 1840 at L’OpÈra, while L’Ange de Nisida was condemned to nearly two decades of silence
and obscurity.

10 years of painstaking detective and re-construction work by Italian
musicologist Candida Mantica have brought the 800-page score back to life.
Mantica has shown that press reports from La France musicale and La Revue et Gazette musicale, dating from February 1839, confirm
that not only was the opera complete, but that rehearsals were underway and
that the ThÈ‚tre de la Renaissance had prepared a mise-en-scËne. The scholar argues that the reconstruction of L’Ange de Nisida (from the autograph score of La Favorite
and other materials in the BibliothËque nationale de France)
illuminates Donizetti’s creative process, enables comparison of the
dramatic and musical characteristics of French and Italian genres at this
time, and offers information about the history of ThÈ‚tre de la
Renaissance.

Set in 1470 in Nisida and Naples, L’Ange de Nisida serves up the
standard elements of opera semiseria – a tragic love-triangle and
a comic strand. It also makes one rue, ‘If only they’d talked about
things’, for the characters are all sure of their own plans and ignorant of
those of others, and the result of their misconceptions is muddle and
misery.

Leone de Casaldi, exiled from the army after a duel, flees to Nisida, an
island off the Neapolitan coast. He yearns to see his beloved Sylvia who,
unbeknown to Leone, is the mistress of King Fernand of Naples and is much
admired by his people. Sylvia, annoyed at being lured to Naples from her
native Andalusia with the promise of a husband only to become a mere
paramour, keeps both admirers at arm’s length. Don Gaspar, Chamberlain to
the King, meets Leone, learns of his need for refuge and starts meddling.
In brief: Leone lands up in gaol before Sylvia’s pleas gain his release;
the King’s plan to wed Sylvia is scuppered when a monk appears brandishing
a Papal Bull threatening to send Sylvia to a convent if the King defies
Rome and marries her; and Don Gaspar comes up with a plan by which Leone
will marry Sylvia, then be banished so that the King can keep Sylvia as his
mistress. After various mix-ups, the deceptions are discovered, and Leone
decides to become a monk. Sylvia, near death, follows him to beg
forgiveness for doubting his fidelity, but when they attempt to flee she
expires at his feet. 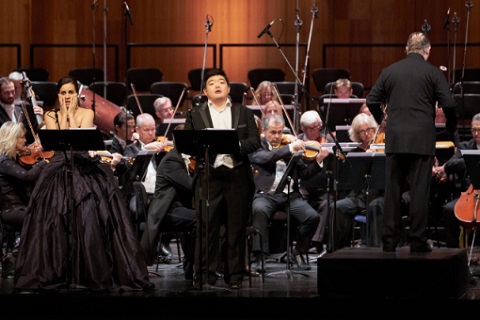 Mark Elder’s commitment and concentration were noteworthy. There was not
the smallest motif in the choral or orchestral parts that was not
carefully, lovingly gestured and nurtured. The balance between soloists and
orchestra was superb, especially as the ROH Orchestra had been released
from the nether regions and placed on stage. Elder made sure that the
imaginative woodwind colours registered, allowing us to enjoy not only
Donizetti’s orchestrations but also those of Martin Fitzpatrick who has
fleshed out some of the sketchy passages in the sources. Both Chorus and
Orchestra demonstrated an excellent appreciation of style and a feeling for
the dramatic character of the piece, and Elder’s energy was unflagging
throughout the two and a half hours of music.

As the Chancellor puffed up with his own self-importance and misguided
assurance of his Machiavellian nous, Laurent Naouri squeezed ever dramatic
drop from the role of Don Gaspar; energised, colourful, attentive to the
text and nimble in the patter, Naouri made a considerable contribution to
the theatrical impact of this concert staging. Act Three is full of
musico-dramatic interest, and Naouri’s duet with Vito Priante’s King
Ferdinand, was a highlight of the evening, as he sought to back-track on
his plan when he realised that Leone was truly in love with Sylvia.

I have to confess that David Junghoon Kim, a former Jette Parker Young
Artist, has not impressed me overly in the past, singing competently and
sometimes acting a little stiffly. But, I’m now prepared to eat my words:
this was a tremendous performance which revealed a sure sense of bel canto idiom and a powerful tenor with plenty of penetrating
presence. His phrasing was elegant, from his first avowals of love to his
bitter rejection of the King, when Leone learns of Don Gaspar’s
manoeuvrings and throws down the sword that he had previously put at the
King’s service. The tenor went from strength to strength, growing in
dramatic confidence as the action progressed. As the machinating monk who
thwarts the amorous intrigues, Evgeny Stavinsky was also superb, revealing
a lovely warm bass.

Joyce El-Khoury seemed a little out of sorts as Sylvia. She looked and
sounded hesitant initially, and her tone never really found its shine or
coloration. Though she sang with discerning shapeliness of phrase in the
Act 3 cabaletta – in which she laments Leone’s apparent, but mistaken,
dishonour – the following cabaletta (adapted from Maria di Rohan,
owing to a gap in the sources), was lacking in fluency and clarity.

While the first three Acts were fully engaging, Donizetti seems rather to
have lost his way a little in Act 4, where the extended quiet,
plaintive duet for Leone and Sylvia resulted in a dissipation of dramatic energy
and, for this listener at least, lessened the emotive impact of the tragedy. But, we are
indebted to Opera Rara for yet another ‘first’ and for their courage,
commitment and stamina in pursuing the rare and vanished in this
repertoire.

is repeated on 21st July. A live live recording will be made
for release in 2019, marking the company’s 25