This is Sawer’s third opera. His first, From Morning Till Midnight
, to his own libretto based on a Georg Kaiser play, was premiered with some
success by English National Opera in 2001, though his second opera, in fact
an operetta, Skin Deep with a libretto by Amando Iannucci, perhaps
failed to quite find its mark when premiered by Opera North in 2009. This
new piece, The Skating Rink, seems something of a return to the
darker, expressionist world of From Morning Till Midnight, though
not without lighter moments.

Bolano’s novel tells the same events from the points of view of three
narrators, each of whom is involved in a different way in the events in a
1990s Spanish town on the Costa Brava, where love leads Enric (Grant Doyle)
to build an illicit ice skating rink so that Nuria (Lauren Zolezzi and
Alice Poggio) can train, but the murder of a former opera singer Carmen
(Susan Bickley), now living on the streets, clouds issues.

Rather daringly, Sawer and Mullarkey take this structure into the opera:
each of the three acts tells the same events from a different point of
view. First, that of Gaspar (Sam Furness) the night watchman at a holiday
camp, tasked with evicting Carmen and Caridad (Claire Wild) and in love
with the latter, who eventually discovers the illicit rink. Then, Remo (Ben
Edquist), Gaspar’s boss, who is in love with Nuria and thinks that he has a
relationship with her. And, finally, Enric (Grant Doyle), the fat and
unlovely head of the town’s social services whose obsession with Nuria
leads him to build the rink for her. Each act advances the plot slightly:
the first ends with the discovery of the rink, the second with the
discovery of Carmen’s body, and the third with the arrest of Enric. Then,
in a Coda, we find out who really did the murder.

The result is rather multi-layered, the characters are unwrapped rather
akin to a Baroque opera, in that we first see Enric through the eyes of
Gaspar and Remo before we hear his point of view. Key moments are enacted
three times, notably the eviction of Carmen and Caridad, but each time in a
different context. Also, rather daringly, each of the narrators actually
addresses the audience: Sawer and Mullarkey stop time and allow the
narrators to address us and explain themselves. This means that some of the
action is described rather than experienced. Again, this creates a complex
multi-layering, the sort of remove from filmic naturalism which is
essential when creating an opera and this new piece is thankfully anything
but a sung play.

David Sawer is noted for the drama of his orchestral works, and he uses the
orchestra in The Skating Rink to create, colour and animate the
atmosphere. The orchestra becomes another protagonist and whilst Sawer’s
harmonic language might be complex and sometimes challenging, his textures
and ear for timbres made the music often seductive and accessible. This is
a highly coloured score, which reflects the subject matter, and Sawer
weaves into it popular references, yet never directly. Having the opera
singer Carmen entertaining in a cafe created a magical scene at the end of
Act Two, and Act Three included a disco which managed to mix drama with a
popular beat, not to mention actor Steven Beard doing a wonderful karaoke
number! And, the use of a brass-band (off-stage and walking on), created
some wonderfully Ivesian counterpoints.

It helped that Sawer and Mullarkey had created some strongly characterised,
not to say meaty roles so that Garsington Opera’s cast of singing actors
had something to get their teeth into. Whilst this is not an opera that you
will come out of singing the tunes, Sawer’s vocal lines, though sometimes
complex, were dramatic, enlivening and expressive; he never noodled. For
the passages where the narrators addressed the audience directly, Sawer
chose a simpler, plainer style, a more neutral type of discourse which
threatened sometimes to lack dramatic interest.

Stewart Laing’s production did not aim to give us naturalism. We never saw
the Palacio Benvingut where the skating rink was built; instead, we had to
rely on the descriptions from the characters. The basic set was a space
with a backdrop of a plastic curtain, which evoked those found in caravans
of the period, and the stage littered with packing cases. A mobile box
structure became Gaspar’s office, Remo’s home and Enric’s office, moving
about as necessary. Other elements, such as tables and chairs were brought
on, and the front of the stage had a boardwalk. Yet, throughout the first
act we asked ourselves, where was the skating rink? In fact, it was there
all the time, the floor of the stage was covered with a special material
which enabled Alice Poggio to skate on it. (One of the male actors also
skated, providing a dream image of Enric as he imagines skating on the
ice.) Where necessary, the cast brilliantly evoked the trickiness of
walking on ice with unsuitable footwear. 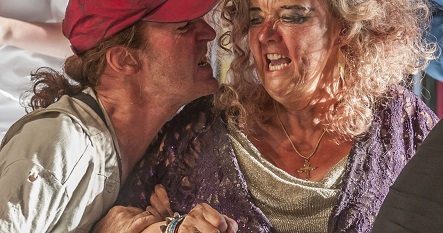 This was very much an ensemble production. Characters emerged and then
retreated, and each singer gave a committed, engaged and engaging
performance. Sam Furness was wonderfully passionate as the young Gaspar,
whose obsession with Carmen’s companion Caridad (Claire Wild) sets the plot
in motion. Furness produced a fine stream of firm tone and strong emotion.
This was a thrillingly committed performance. As Remo, Ben Edquist (making
his UK debut) was cooler and emphasised the character’s lack of
self-reflection. Rather sex-obsessed, he never understands his relationship
with Nuria (the tantalising Lauren Zolezzi), and is puzzled when she
evaporates. Edquist has the work’s final words, slightly enigmatic and
wonderfully evoking the character’s puzzlement at life. As the final
narrator, Enric, Grant Doyle was particularly impressive having taken on
the role at relatively short notice to replace an ailing Neal Davies. At
first, we see Enric through others’ eyes, fat, unlovely and rather nasty,
and only in the last act do we find the passion and obsession underneath.
Doyle gave a beautifully crafted, multi-layered performance which really
brought the character alive and, surprisingly, made us begin to sympathise
with him.

The limitations of Sawer and Mullarkey’s approach was the other characters
were slightly less well drawn. There was no authorial voice and this meant
that we never heard things from Carmen, Caridad or Nuria’s point of view.

Susan Bickley was superb as Carmen, fierce, troubled and rather crazed, yet
complex, and revealing elements of the person she used to be in moments
like her singing in the cafe, and her blackmailing of Enric (having
discovered the skating rink, built with embezzled council money). Claire
Wild was evocative as the troubled Caridad, whom we only saw her through
Gaspar’s eyes. Lauren Zolezzi really brought out the mystery and sense of
contained distance in Nuria’s character, as we see her through both Remo’s
eyes and those of Enric. And, she was allowed to develop most, as we
learned more about her in the coda. The movement between Zolezzi as singing
Nuria and Alice Poggio as skating Nuria was beautifully done, and the
result was a very real character.

The role of Pilar the town’s mayor might have been relatively small, but
Louise Winter really made it count. Alan Oke was Carmen’s would-be lover
Rookie. Also living on the streets, the two have a love-hate relationship
with a wonderful shouting match which concluded Act Two. Rather underused
in the three main Acts, Oke created Rookie’s character using a breathy form
of sprechstimme, which blossomed in his final solo in the coda
which revealed the truth of the murder in thrilling fashion.

Under Garry Walker’s expert guidance, the orchestra drew a wide range of
colours and textures from Sawer’s score, giving as thrilling and committed
performance as the singers on stage and making the piece really count.

Sawer and Mullarkey have created a new opera with a striking voice, one
which managed to draw an enthusiastic response from a very engaged
audience, without ever seeming to talk down and with music which was of
admirable complexity and sophistication. The drama was handled in a
confident fashion which really made you want to know what was going to
happen. The whole received a strong performance from both cast and
orchestra, and it is being recorded by the BBC for broadcast later this
year on BBC Radio 3.