Among her Aix projects Mme. Mitchell staged George Benjamin’s Written on Skin with libretto by British playwright Martin Crimp. Mr. Crimp has subsequently served as dramaturg for Mme. Mitchell’s Aix Pelleas et Melisande and now for Ariadne, both productions brilliantly moving to meta-theatrical levels (metatheater is a Martin Crimp coined term). This simply means that it is theater as seen by theater — the original exists as well as how it is seen. Like metaphysics.
Of crucial contribution to the Aix Ariadne was the conducting of German born Marc Albrecht, now chief conductor of the Dutch National Opera. This maestro exploited the chamber music voice of the Strauss score in the expanses of the open air ThÈ‚tre de l’ArchevechÈ, the grandness of Strauss’ orchestral introduction to the prologue monumentally minimized, but energized to accommodate the frantic transformation of the host’s (“the richest man in Vienna”) grand parlor into a makeshift theater space (a square of sand with a dinner table).
The maestro pulled out the intricacies of the myriad instrumental solos to create the usual intensity of backstage energy now augmented by the negotiations of merging commedia dell’arte with opera seria. Zerbinetta’s persuasive arguments to the opera seria’s composer seamlessly flowed into a passing moment of private musing by the composer, his fervent ode to music magically absorbed into the behind-the-scenes maelstrom.

The totality of the Katie Mitchell production
And finally Mo. Albrecht transformed Strauss’ bombastic Ariadne Bacchus duet into an intimate discussion between two lovers accompanied by the exquisitely sweet comments of Dryad, Naiad and Echo, Bacchus taking frequent gulps of water from a plastic water bottle.
As Strauss and Von Hofmannsthal intended it was chamber opera, though now with Mme. Mitchell’s superimposed household on top of it — remember that the original intention was that Strauss’ opera seria was but an ending for Moliere’s Bourgeois Gentilhomme (translated by Von Hofmannstahl). In fact Mme. Mitchell’s household’s cross-dressed host and hostess sometimes interrupted Strauss’s opera with sarcastic comments (spoken) before they too climbed onto the stage to participate in Ariadne’s plight* and Zerbinetta’s solutions.
*Ariadne was pregnant.
Strauss was a very reluctant partner in this second, purely operatic version of the Strauss Von Hafmannstahl play-cum-opera, fearing with grave and indeed quite pertinent concerns a lack of comprehensibility for such a far-out, obliquely sculpted narrative. Katie Mitchell brilliantly brokered this Von Hofmannstahl/Strauss dispute by pulling it all together into one totality. The play within a play, the location and circumstance of the play, the guests at the play, the actors in the play (the commedia dell’arte troupe became transfixed by Ariadne’s outpourings), the exposed backstage psychologies, the opera indeed coalesced into pure metaphysics. 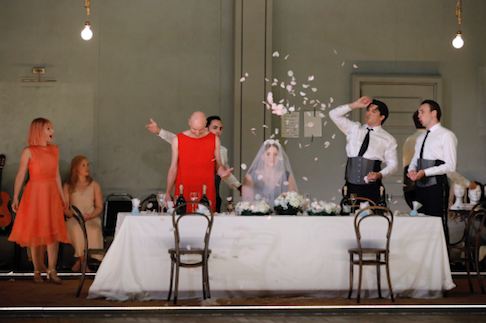 Zerbinetta, the richest man in Vienna, Ariadne, three of the commedia troupe
The Aix Festival is famed for its casting sophistication, and this Ariadne is no exception. Young Norwegian soprano Lise Davidsen let out immense, inhuman howls to welcome us to Ariadne’s solitude on Naxos. She added fine musicianship and vocal finesse in the use of her hugely powerful voice. French soubrette Sabine Devieilhe as Zerbinetta cooly seduced first the composer, and then she lectured Ariadne with splendrous soubrette tone in her lengthy, very lengthy “Groﬂm‰chtige Prinzessin…So war es mit Pagliazzo.” The aria is punishing in its brilliant, stratospheric tessitura, flawlessly exuded in this Zerbinetta’s atypical soft charm and compassion that fit perfectly into the metaphysics of the production.
American mezzo-soprano Angela Brower as the composer physically conducted her opera though of course she sang not a word after the prologue, her presence in the opera seria adding the concept of creation and pride of creation to Mme. Mitchell’s inexhaustible philosophical complexities. She somehow seamlessly integrated her “Sein wir wieder gut” into the conceptual flow of the prologue, emanating gorgeous silvery tones in her radiant declaration of the powers of music.
Austrian bass baritone Josef Wagner as the Music Master was indeed authoritative in his deftly sung, deft management first of the spoken majordomo (actor Maik Solbach) and then of household’s two sets of performers. He was aided by the household’s very tall Dance Master, cross dressed and made taller by stiletto heels in the person of British tenor Rupert Charlesworth who for all his draggy, swishy flightiness was cooly supportive of the fraught performers in frank, masculine voice.
Like Zerbinetta the comedia dell’arte troupe (Harlequin, Brighella, Scaramuccia and Truffaldino) had costumes that lighted up (ah, what riches LED lights have brought to opera), in this case the exaggerated cumberbunds of their matching formal wear (black pants, white shirts) lighted up to make the flashiness of their comedic performances apparent, and in stark contrast to their weighty, maybe drab operatic counterparts.
Dryad, Naiad and Echo were physically matched to be sprites of nature, and vocally matched to be the sweetly voiced handmaidens of nature and its eternal renewal. Bacchus was sung by American heldon tenor Eric Cutter who served and re-served in stentorian voice (lubricated by gulps of water) the cake-like boxes of starry lights to Ariadne’s table throughout her death scene.
This Ariadne auf Naxos is an Aix Festival co-production with Barcelona, Paris, Helsinki, Copenhagen and Luxembourg. Be advised, it is a production worth crossing continents, even oceans to see.
Michael Milenski