And how the work suits such an approach; in many respects, the
deconstruction has already been done. Probably Jan·?ek’s greatest
opera, indeed his greatest work of all, it is no accident that it is
the one Pierre Boulez chose to conduct, towards the end of his life.
Alas I never heard that live, although in 2014, I would see

in Berlin. That was, of course, a fine piece of theatre, as indeed was

, seen earlier this year. Castorf, however, revelling in its
fragmentary nature – for it is in many respects his own – triumphantly,
I should say dialectically, offers the strongest sense of a whole I
have seen or could imagine. By taking it as it is, Castorf’s team and a
magnificent cast, aided greatly by Bavarian State Opera forces under
Simone Young in the finest performance I have heard from her, alert
both to the needs of the minute and of the greater architecture,
present and represent the opera as it is and might be. Quite without
sentimentality, they write and rewrite, igniting and reigniting that
Dostoevskian redemptive spark that is both present and absent
throughout, depending when and where one looks and listens, how and
with what one pieces together one’s own narrative, musical and
dramatic. 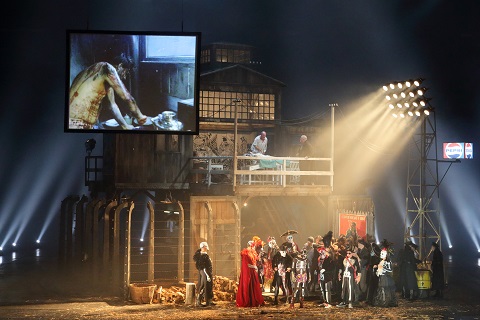 We are in Russia – no doubt of that. It is Russia at a dark time –
again no doubt of that. (When, however, was that not the case, save for
a few years under Lenin, and even then…?) But is it a ‘real’ Russia?
And what indeed could so impossibly naÔve a formulation mean? Live
camerawork performs all manner of tasks, questioning our ability to
comprehend, to view, to narrate, whilst making it all the more
necessary that we try to do so. There is little doubt concerning the
realism – until, that is, a true Carnival of the Dead comes amongst the
prisoners and the prison. Magic realism? Perhaps, but if so, it is the
blackest of magic to follow, perhaps even to sublate, the blackest of
comedy and (non-)redemption. Whereas, in his


, Castorf took us to an alternative historical path for the GDR, an
alternative that turned out not to be so very alternative at all,
(Al)Exander Platz still a commercial, post-socialist wasteland, Wall
Street still failing to burn, here we seem perhaps to have joined the
USSR for an alternative 1930s.

Or have we? Trotskyist hints abound: the rabbit hutch (many thanks to
my friend Sam Goodyear for having pointed out the connection), Mexico
too (‘Partido liberal’, we read on one of many historical and/or
imaginary signs), a film advertisement (in Spanish), starring Alain
Delon. (Hang on, if we are in 1972…?) Even a carnival bird Aljeja,
splendidly sung by Evgeniya Sotnikova, seems both to suggest and to
disavow that possibility. Or are we, was I, confusing him/her – here
most definitely ‘her’ – with the Prisoner with the Eagle, or his eagle?
What might that mean here, whether the confusion or the eagle? Russia
or the USSR, however, it certainly remains, even down to the affinity –
which seems to have been overstated by some – with Aleksandar Deni?’s


. What does a sign for Pepsi Cola in English and Russian tell us? And
what, at the end, does the English poster invitation to travel to the
USSR as a holiday destination mean, not least in such appalling
circumstances? Is it a joke, as is perhaps suggested by the presence of
a Ring crocodile? Stop trying to ascribe meaning to
everything: is that not what, as an imprisoned intellectual, one is
compelled to do? Are we to see the future and will it to work, or
perhaps indict it? Who knows? We shall never make the journey, just
like so many of those prisoners, yet unlike, perhaps, Gorjan?ikov, who
thinks he has something written in his head. Like Dostoevsky, like
Trotsky, like Castorf, like our writer, Alexandr Petrovi? Gorjan?ikov,
we write and rewrite. So too does the action all around, on stage, on
film, seen and unseen; so too, of course, does the orchestra. 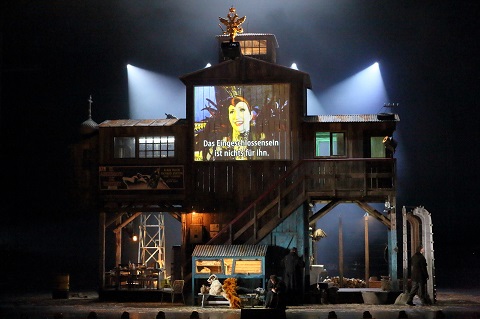 It is complicated, yes; how can a fragmentary drama with so many
‘characters’ or at least people not be? But it is also visceral,
direct. Violence we see, we feel, whether we like it or not, be it in
the Guard’s sadistic flagellation (a truly nasty Long Long, almost a
match for the still nastier Governor of Christian Rieger) or in the
metal of the steppes’ orchestra. Opera too, even in this most
inhospitable of circumstances, is reborn. If the Wanderer seemed to
have been an inspiration for our noble prisoner’s initial journey to
this camp, Peter Mikul·ö capturing both intelligence and a certain
camouflaged nobility, then it is the Wotan of the second-act Walk¸re monologue who comes to mind in that of äiökov. That is
partly a matter of Bo Skovhus’s searing portrayal, quite the most
powerful performance I have seen and heard from him in a long time. But
everyone involved has played a role in putting these pieces together,
in constructing something from these musico-dramatic shards. ‘A mother
gave birth even to Filka,’ after all – and we know it, because, like
äiökov, he sings, not least in this devilish incarnation from Aleö
Briscein. So too, earlier, do Don Juan (an outstanding Callum Thorpe)
and his pseudo-Leporello (another excellent performance, this time from
Matthew Grills), in a play-within-a-play. That, thanks to Castorf’s
lengthy experience with and rejuvenation of post-dramatic commentary,
seems more of a play-in-itself than I can recall – until, once again,
it does not. 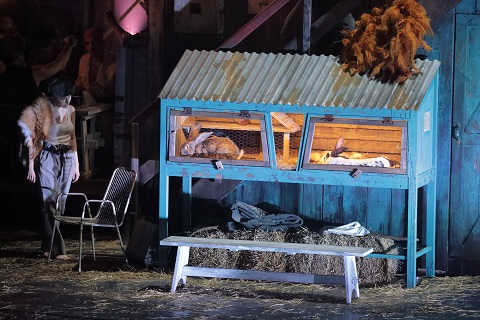 For, like Don Giovanni, this is redemptive within and
without, or seems to be: as I said, it takes life and drama as they
are. A (post-)religious consciousness is at work here. It also,
perhaps, suggests what they might be, or at least what one day, when
the revolution comes again, the revolution to which we cling no matter
what, we might hope it to be. The noble prisoner leaves, though, so
most likely not. He has used, learned from his experience; so, we
imagine, have we. The carnival of (Russian) death continues. There is a
chink of something uncertain. In the blackest of comedies, we might
even think it light. Humanity even – though are we not all now
post-human(ist) as well as post-dramatic? Who knows, who cares? This
human comedy and tragedy of which we are part rolls on, just as it did
for those CalderÛn-like figures of a reimagined Salzburg World Theatre
in the celebrated post-war Furtw‰ngler Don Giovanni. The final
scene alienates – like Mozart’s. And yet, like that too, it moves (us).
We have experienced something, even if we have not a hope in our living
hell of learning what it may have been. We have, like this Gorjan?ikov,
written a work of sorts in our head. No one will read it or even
remember it, perhaps it would be impossible for anyone to make sense of
its difficult, even nonsensical fragments; yet that spark of
creativity, of art, of that which Marx just as much as Schiller
considered made us human, has flickered. At least we think it did.
Perhaps. Or at least we thought it did. Once. Perhaps. We return, like
Gorjan?ikov, like Trotsky, to watch the post/non-human (non-)drama of
the rabbits in their hutch, caged like us and yet (to the sentimental?)
more free. Perhaps.