The John Wilson Orchestra Prom is a greatly anticipated annual highlight of
the Proms season, and in recent years Wilson and his band have celebrated
the music of George Gershwin, Cole Porter and, in 2015, Bernstein himself (

). The concert was billed in some sources as the first time that Arthur
Laurents, Leonard Bernstein and Stephen Sondheim’s complete concert version
of the musical had been performed in the UK – though Bernstein-protÈgÈ
Justin Brown conducted the LSO in a Collins Classics summer pops
performance in 1990, with Derek Chessor (Riff), Cynthia Hayman (Maria) and
Kurt Streit (Tony) in the leading roles. But, perhaps on that occasion the
score was truncated – and it matters not: this was certainly the first
complete performance of this version at the Proms, and Wilson and his
musicians didn’t disappoint those who had reportedly been queueing since
the early hours for day-passes. The RAH was packed to the rafters for the
evening performance, the second of two that day, and the audience made
their prior excitement and subsequent appreciation heartily felt and heard.

Wilson’s baton is a live wire: it jives with the silky slipperiness of the
most sinuous snake, ducking and diving, neatly and niftily. With an
occasional tight sway and precise, sometimes miniscule movements, Wilson
indicates his intent with economy and authority, and every player knows
exactly what he wants. The twenty-one violins and eighteen cellos and
double basses played with plush richness; woodwind solos had space to sing;
the bright big-band brassiness was alternately polished and rasping; the
two percussionists juggled the panoply of chimes, maracas, whistles,
cymbals and sundry sound-makers with calm dexterity. Quite simply, I felt
as if I was wallowing in orchestral luxury from the first off-beat
pizzicatos which initiate the Prologue to the violins’ pianissimo
reminiscence of a fragment of ‘Somewhere’ which brings the tragedy to a
close. 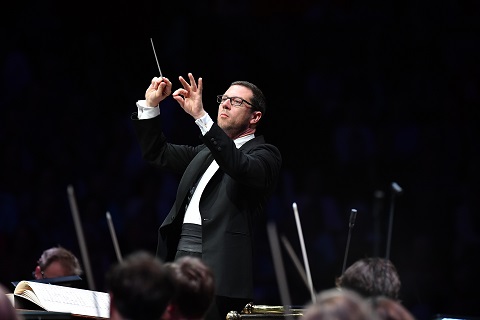 Tempi were on the swift side which was great for ‘Something’s Coming’ and
‘The Dance at the Gym’ but, while it might be judged that the up-tempo
‘Maria’ communicated the impetuousness of Tony’s passion, ‘Tonight’ needed
a little more spaciousness for the phrases, and the singers, to breathe. In
the latter, though, the voices of Mikaela Bennett (Maria) and Ross Lekites
(Tony) blended with beguiling ease. 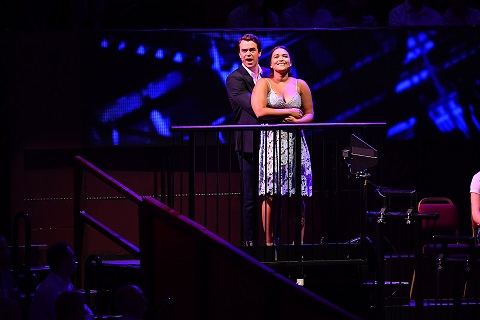 After the pre-season ‘fuss’ about casting – which saw Olivier-award
nominated Sierra Boggess (Phantom of the Opera, The Little Mermaid, and House of Rock) withdraw from the
role after criticism that Latina/o actors had been overlooked – Bennett
proved an open-hearted, pure-toned Maria, who kept her vibrato in check at
moments of romantic innocence and sincerity (‘One Hand, One Heart’), soared
with beautiful sweetness, and made ‘I Feel Pretty’ more convincing that it
sometimes is, aided by some terrifically expressive string accompaniment. 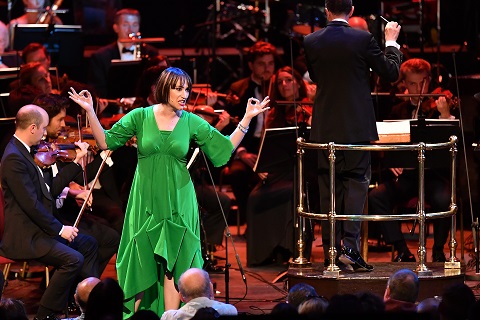 Lekites (moonlighting from Frozen on Broadway) made good use of
his high baritone to convey just the right note of frankness and naivety,
and had sufficient heft to hint at the heights of Tony’s romantic ardour,
though there was little ‘chemistry’ between this pair of star-crossed
lovers. Eden Espinosa was a vivid Anita, at least vocally, though not
entirely convincing dramatically; that said, ‘America’ suffered
particularly from the absence of a stage milieu, and in terms of orchestral
flair this number was stunning. What wonderful orchestrations Bernstein,
Sid Ramin and Irwin Kostal devised between them – it seemed that the double
basses might achieve rocket-style lift-off from their stools as they
attacked the triplet syncopations with true panache and gusto. Alistair
Brammeri and his fellow Jets whipped through ‘Gee, Officer Krupke’ with
spice and punch. And, while I was wondering why Louise Alder had been
drafted in to sing ‘Somewhere’, she appeared in the organ loft and sang,
literally, like an angel – and my unasked questions evaporated into the
ether, extinguished by the pure luminosity of her soprano. 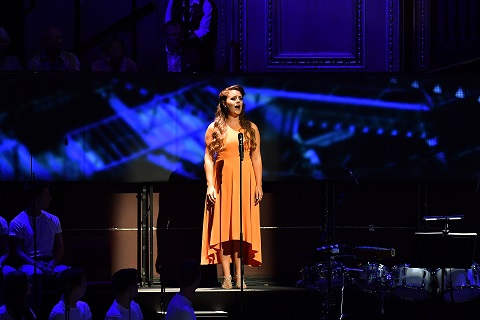 This might have been a ‘concert’ version, but stage director Stephen
Whitson made use of every RAH stair-well, balcony and platform. What was
‘missing’ however, was dramatic context. There was no dialogue, excepting
some spoken text over the sung numbers and one or two introductory phrases
(perhaps this was fortunate, as the amplification volume button was turned
up so high the spoken text would surely have become as muddied as some of
the busier orchestral dialogues, which were at times cloudy despite
Wilson’s fine baton-work).

And, though the cast were costumed – tight coloured ti-shirts for the
muscled Jets and Sharks, ’50s frocks (some more flattering than others) for
the ladies – there was little sense of the upper West Side Manhattan
milieu, or the urban tensions between the white Americans and Puerto Rican
immigrants which underpin the dramatic frissons. The latter find expression
not just in Laurents’ book and Sondheim’s skilful lyrics, and, of course,
in the score itself, but also in Jerry Robbins’ choreography – a veritable
narrative ballet – and the absence of the danced expression and drama was a
more serious deficiency – all the more so as for last year’s


it had proved possible to stage all elements that form the ‘whole show’.
The second act suffered especially from the lack of theatrical context, for
here the dramatic structure needs all the constituent parts to be pulling
their weight. The tragic denouement seemed to take the Hall unawares, and
lacked gravitas and pathos. We did have a ‘Chorus’ – the students of ArtsEd
and Mountview theatre schools – tiered behind the orchestra stage-right,
though their slightly clumsy choreographed ups-and-downs and ‘dramatic
gestures’ didn’t make much impact. 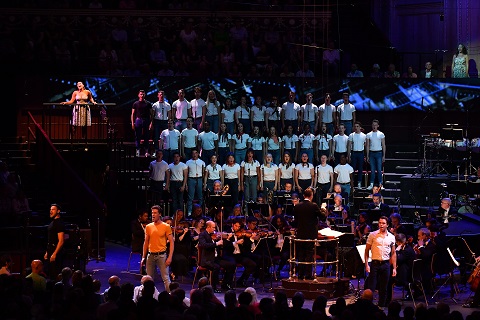 One positive outcome of these mildly irritating short-comings was that the
emphasis was thrown on the music – Bernstein’s wonderful eclectic fusion
and Wilson’s heart-winning rendition of it. As Nigel Simeone recalled in
his programme article, when Kenneth Tynan saw West Side Story on
Broadway in 1958 he described the score as ‘smooth and savage as a cobra’.
Perhaps a little more grit, even vulgar earthiness, would not have gone
amiss at times, but who could not relish such lustrous lavishness and
sweetness as we enjoyed.