Neither Boulanger nor Elgar had direct experience of war, but, like all decent people with any conscience, they cared about what was happening around them, and could address the human impact of war. Boulanger’s Pour les funerailles d’un soldat is a grave processional, a far more mature piece than the miniatures she is usually represented by on programmes that stress her gender and youth, as opposed to her music. A steady pace, drum rolls, the tolling of bells and rising frisson in the orchestra enhance the solemn choral backdrop. The strength of Alexandre Duhamel’s delivery added even more gravitas. At the end, wordless sighs vocalized by the voices of the BBC Symphony Chorus.
This provided context for Elgar’s Cello Concerto in G minor op 85 (1918-9) which, in some ways, is am abstract funeral of sorts. Jean-Guihen Queyras defined the first theme drawing out the richness, as if to savour it. Gardner and the BBCSO reiterated the theme with sweeping expansiveness. Theme and response repeat, replicating the rising and falling figures which move like processional. Queyras’s tone was beautiful, suggesting the warmth of Elgar’s vision, yet also pointedly poignant. As so often in Elgar, confidence is undercut by an awareness that things do not remain the same forever. Although Gardner’s approach was not as full blooded as, say, Barbirolli, he conducted with refined sensitivity, which worked well with Queyras’s sophisticated elegance. The sudden changes of direction were nicely defined, enhancing the interaction between soloist and orchestra. Though we’ve heard Elgar’s Cello Concerto so many times, this approach was perfectly valid, and rewarding because it was slightly unusual. For an encore, Queyras chose Dutilleux, one of the Trois strophes sur le nom de Sacher, a brave choice in a place like the Royal Albert Hall where sensitive playing is usually drowned out. But Queyras’s mastery held the audience spellbound. 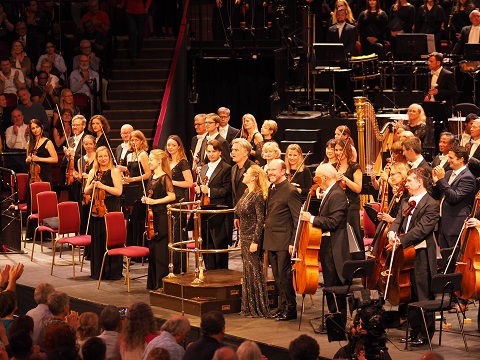 Edward Gardner, soloists and the BBC Symphony Orchestra. Photo Credit: Roger Thomas.
But the highlight of Prom 41 was, undoubtedly, Ralph Vaughan Williams’s Dona nobis pacem, which Gardner approached with astonishing originality, bringing out the power in the message. Perhaps in modern times, we can better appreciate the visceral intensity. Gardner also drew out the structural cohesion of the piece, and even brought out its cyclic qualities, which are themselves part of meaning. Beware of over-emphasising the use of different texts. What matters is how Vaughan Williams draws together different strands of human experience into an integrated whole. Sophie Bevan stood in the organ loft, distant but not too distant, a reminder that the organ and its restrained undertones pulse at the heart of this piece. Bevan floated her lines so they penetrated the vastness of the hall, the exquisite purity of her tone reflected in the winds. Within moments serenity was shattered by savage chords, the pounding of timpani and the call of trumpets. “Beat! Beat ! Drums” is a Dies Irae in all but name, the lines swirling and whipping like flames, swept by violent forces, the BBC SO and Chorus unleashing fury.
Neal Davies sang the Reconciliation, where the word “beautiful” is repeated, not only by the soloist but by the chorus. Beautiful, because “mine Enemy is dead, a man as divine as myself is dead”. This is the core “anti war” sentiment, refuting the idea that war resolves things: in death, all men are equal. Thus the deliberate phrasing, where Davies parsed the sentence with pauses. “I draw near”, he continued, approaching the intimate moment of the kiss, with reverence. A violin melody singing alone, garlanded, like the soprano was earlier, by hushed chorus. Thus a brief repeat of the Dona Nobis Pacem, plaintive and austere with a rumble of muffled drums as the Dirge began, its quiet , relentless pace suggesting the cortege described in Walt Whitman’s text. With the four strophes, the chorus burst out defiantly. “I hear the great drums pounding…and every blow of the great convulsive drums strikes me through and through”. This is vintage Vaughan Williams in every way, with its echoes of Symphony no 3, the tag “pastoral” more ironic than literal. The text, also Whitman, refers to “two veterans, son and father” who die together, buried in a double grave, statistically an unlikely image in modern warfare, but one which works in metaphysical terms, underlining relentless futility, where one war engenders the next. No words needed in the orchestral postlude, from which Davies re-emerges as the voice of the Angel of Death; the words “Dona nobis pacem” now appear almost as screams of protest. The swirling furies of the Dies Irae return, to a text from the Book of Jeremiah.”There is no balm in Gilead”.
Most dramatic of all was the final section. “O Man, greatly beloved” sang Davies with fulsome affirmation, followed by orchestra and chorus in a series of quotations from the Old Testament. Gardner defined the ebb and flow, intensifying the trajectory: If all things must change, there may be resolutions beyond the grave, and from war. Thus “Dona nobis pacem” rang again, clean, pure and bright, Bevan holding the last words so they seemed to vibrate into eternity.
Anne Ozorio