John Wilson is rapidly becoming an essential ingredient in the Proms season
recipe. It’s hard to imagine a year going by without the conductor and his
eponymous orchestra entertaining us with a performance or two characterised
by slick professionalism, musical precision and kinetic energy. He and his
band have already contributed to the BBC’s Bernstein 100
celebrations with a sassy performance of the concert version of


earlier this month. For his second Proms appearance this year, Wilson
teamed up with the LSO, a jaunty cast and the bright-voiced students of
ArtsEd for a night on the town that whizzed by with jazzy high-jinks and
ear-pleasing appeal.

So, before the praise, the provisos. First, On the Town was a
theatrical adaptation of Bernstein and Robbin’s previous collaboration: the
thirty-minute ballet, Fancy Free, which had triumphed at the Met.
The New York Times headline on 19th April 1944 had
read, ‘Ballet by Robbins Called Smash Hit’, and critic John Martin hailed
score and choreography: ‘The music by Leonard Bernstein utilizes jazz in
about the same proportion that Robbins’ choreography does. It is not in the
least self- conscious about it, but takes it as it comes. It is a fine
score, humorous, inventive and musically interesting. The whole ballet,
performance included, is just exactly ten degrees north of terrific.’ When the romantic adventures of three wide-eyed sailors who find
themselves with twenty-four hours to kill in New York – “a helluva town” –
before their ship leaves its berth in Brooklyn Navy Yard was transformed
into a Broadway show, the narrative was largely dance-driven, as attested
by the large proportion of the score of On the Town that is taken
up by instrumental interludes which accompany and articulate the balletic
narrative.

Indeed, subsequently, when MGM bought the film rights to On the Town, producer Arthur Freed excised most of Bernstein’s
songs. Will Friedwald suggests that director Gene Kelly’s ‘primary
motivation as one of the film’s stars was to dance to Bernstein’s
superlative ballet music; as a first-time director, he apparently didn’t
feel he had the clout to make the case for the rest of the original score.
Neither did Comden and Green–who were importuned to write substitute songs
with MGM stalwart Roger Edens–and, remarkably, neither did Sinatra. Betty
Comden later told me, in 1994, “Frank said that the only reason he agreed
to do the movie was so that he could sing ‘Lonely Town,’” a number that
never made it to the film.’ 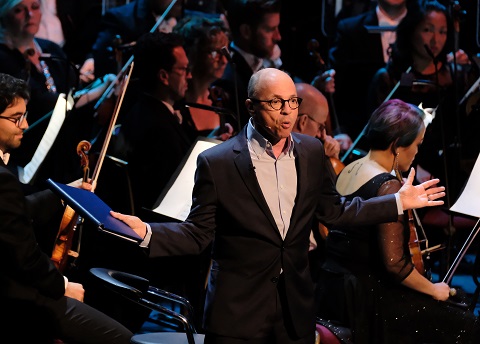 Robbins’ choreography may not be extant, but dance remains integral to the
dynamism of the plot and the stylistic expressivity of the musical milieu.
The absence of physical embodiment of the narrative in this Proms concert
performance was a major hindrance, for the dance binds together the
nineteen episodic scenes that carry us across New York. Some attempt at
redress was made with the inclusion of a narrator, the experienced Kerry
Shale, who, lyric book nestled in the crook of his arm, proved a confident
story-teller, suavely linking the musical numbers; but Shale’s
larger-than-life delivery only confirmed the problem, particularly in Act 2
when dance numbers predominate over song. 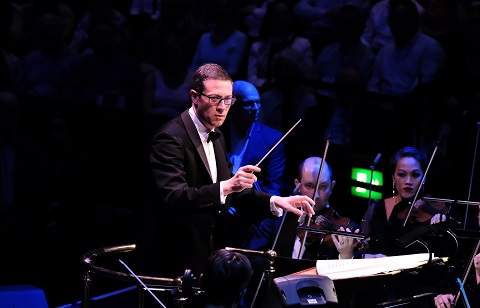 Second, the BBC engineers really do need to modify the ear-splitting
amplification of the Proms’ musical theatre presentations. I think the
volume and reverb switches were turned down after the first twenty minutes
or so, but perhaps my ears, simply and sadly, just became accustomed to the
head-churning echoes. The spoken dialogue was particularly deafening
initially; and single-line contributions from soloists in the ArtsEd Chorus
thundered over the LSO with the stridency of a regimental Sergeant Major.

There were some unintended benefits of the absence of a choreographic
narrative though, chiefly that in the extensive instrumental interludes the
spotlight was thrown on the music itself: the easeful flow of Bernstein’s
poly-stylistic integration and the LSO’s precisely etched delivery of the
composer’s jazz, blues and Broadway-vernacular cocktail. Perhaps there was
a little less swing and sassiness than we are customarily treated to
courtesy of the John Wilson Orchestra: others may disagree, but to my ears
the brass didn’t have quite enough raspy brashness and the violin tone,
while clear and singing, needed a bit more luscious Broadway schmaltz. In
Gabey’s ‘Lonely Town’, Wilson’s left hand went into overdrive in an effort
to coax a syrupy sheen and emotive vibrato from the LSO violins, but after
the interval he seemed more restrained. That said, individual players and
sections – particularly the woodwind and trumpets – played with a precision
that highlighted the order and clarity of Bernstein’s musical language and
form, no matter the sense of freedom and free will that it conjures. Jazz
specialist, saxophonist Howard McGill, tugged the heart-strings. And,
nestled at the rear was an inner band of piano (Elizabeth Burley, showing
how to honky-tonk), drum-kit, brass and amplified double bass (one
rhythm-invigored Laurence Ungless, I think), that brought some brazen
vigour to the proceedings. 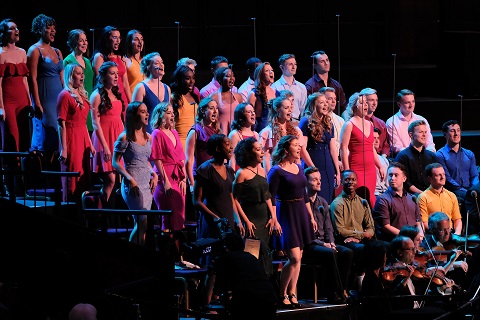 
but here the young singers were much more impressively marshalled,
choreographically and vocally, and, as city crowds, night club revellers,
they had a firmer narrative role too. Uncredited individuals put in fine
solo turns: in Act 2, Diana Dream’s parodic blues number, ‘I Wish I Was
Dead’, successful trod the fine line between glamorous celebration and
satirical parody. The three sailors who appeared in the organ gallery at
the close to begin their own twenty-four hours ‘on the town’, delivered
their closing salute with military panache and pride.

Stage director Martin Duncan made good use of the Hall’s walkways and
stairwells; and the panel frieze offered vistas of New York – its arching,
aspiring bridges, the underbelly of the metro, the red lights of its
night-life. When Ozzie and the voracious anthropologist Claire de Loone
enjoyed their amorous assignation amid the dinosaur fossils, the collapsing
animation – complemented by acrobatics from the xylophone player, who
simultaneously juggled rattle and whistle – raised the loudest laugh of the
night.

The cast demonstrated a unanimous appreciation of Bernstein’s blend of the
comedic and the serious. Much is frivolous, but it shouldn’t be flippant.
Claire Moore staggered on her red stilettos in stupendous inebriation but
we knew she would not topple, and her message to Siena Kelly’s fresh-voiced
Ivy Smith – let your artistic dreams and goals be your guiding light, not
your romantic whims – spoke surely of the feminist ambitions of the 1940s.
Barnaby Rea revealed a terrifically focused low bass as the First Workman
in the opening moments and was a sympathetic Judge Pitkin. 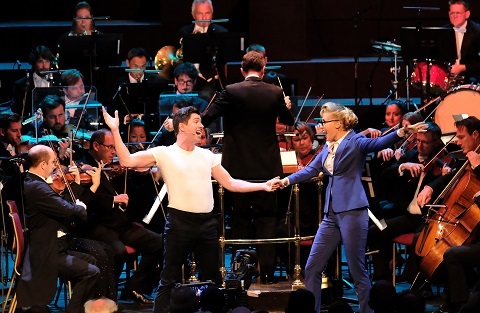 Nadim Naaman’s Ozzie was fittingly over-the-top without being ridiculously
overblown. As Chip, Fra Fee winced with naÔve gaucheness when rampant taxi
cab driver Hildy launched herself upon him, in their disorderly duet, ‘Come
Up To My Place’. Nathaniel Hackmann was an earnest Gabey, singing ‘Lonely
Town’ with open-hearted warmth and ‘Lucky To Be Me’ with guileless honesty,
but he did not neglect the humour of Gabey’s desperate trawl ‘in search of
his gal’ in Act 2.

But, the male characters are largely ‘types’, and it’s the women who, more
individualised and independent of spirit, who hog the spotlight. As Hildy
Esterhazy, Louise Dearman was assertively but harmlessly predatory, ready
to drive a cab or rustle up a cordon bleu dinner with equal Èlan if it
would win her a man. Dearman gave an invigorating rendition of ‘I Can Cook
Too’, all brassy assurance with a light-hearted patina, avowing
breathlessly that she could “make a magazine cover” and be a “wonderful
lover”, as well as “hit the high Cs” – and she did. Celinde Schoenmaker’s
more ‘operatic’ Claire de Loone was similarly in command but, despite her
tight trouser-suit, more obviously sensual, though Schoenmaker’s
beautifully sweet, floating leaps to the top suggested sincerity too. 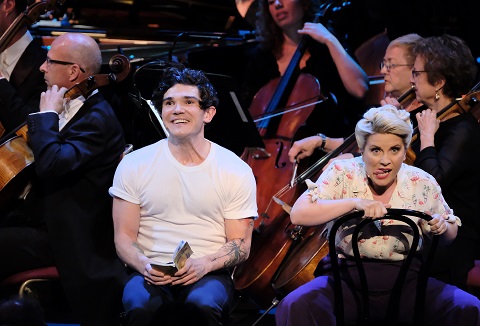 If there was one thing missing, it was the very real sadness and shadows
that surely reverberate through the quartet, ‘Some Other Time’, when Chip
and Hildy, Ozzie and Claire realise that their day of hunting for their
soul mate is over and that they must soon return to their ship and sail off
to war, and perhaps to their deaths: “When you’re in love/ Time is precious
stuff — /Even a lifetime isn’t enough.”

In ‘From Ballet to Broadway and Beyond’, Wall Street Journal, October 13th 2014.