There were ghosts present — Jansons’ teacher Herbert von Karajan who influenced the design of the Grosses Festspielhaus to favor the Vienna Philharmonic, and Neuenfel’s artistic ancestors — Salzburg Festival founder Max Reinhardt and the surrealist poet/sculptor, Max Ernst — who formed Mr. Neuenfels to be an enfant terrible of a more recent German opera world.
No longer of an age to be thought of as enfant terrible Neuenfels nevertheless is true to form. He did create a truly surreal Pique Dame, its action frozen into multiple tableaux, tableaux that oozed the luxe of Czarist Russia, the austerity of death, the naÔvetÈ of love, the joy of sunlight, the frustration of waiting, the anxiety of searching, and so on.
Fixating on the specific mood and atmosphere of each number of Pique Dame (it is very much an old style numbers opera) the heavy pathos of Tchaikovsky’s tormented, obsessed lovers is overlooked, pushed aside to paint the moments of the story. We were no longer able to connect a flow of feeling, thus we were left with no sympathy for Hermann or for Liza. We did have a huge sense of their world. 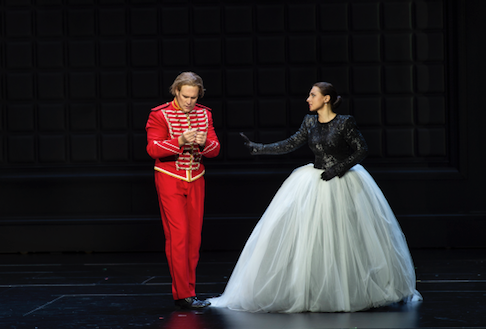 Brandon Jovanovich as Hermann, Eugenia Muraveva as Liza
These atmospheres were gloriously, indeed sumptuously created in Von Karajan’s very present orchestra pit, conductor Jansons urging every possible color from the Vienna Philharmonic, its solo players and its sections creating their unique Vienna tonal world. It was this orchestra beyond compare that riveted us for the multitude of scenes that exposed the soul of the tormented composer Tchaikovsky far more than it involved us in Pushkin’s tale.
Conductor Jansons considers this opera one of the ten finest in the repertory. Though most of us would not agree we surely must appreciate his respect for the piece and for this surely once-in-a-lifetime reading.
The stage setting and costumes were huge in keeping with this orchestral magnitude. Huge gray tufted walls were set upon a black floor laden with conveyor belts used to move fixed battalions of choristers on and off the stage and to allow Hermann to remain stationary while walking, as examples. A proscenium was built into the back wall through which smaller stages were thrust forward for the pastoral performance and as a hospital room the death of the countess. As well the gray surround walls served as a screen for huge projections of storms, city streets and, of course the triumphant face of the pique dame as the production’s final image.
Each chorus number, and there are many, was specifically costumed. There were possibly one hundred choristers, dressed first as fantastically breasted Mother Gooses, keepers of the possibly 50 children chorus who arrived in cages. The choristers became bathers, then donned rain gear when the weather changed, wore party dress for the engagement scene, skeleton costumes, elaborately bustled black dresses, and the men in tuxedos for the final card game.
It was extravagant, overpowering, expensive costuming.
If the elaborate costuming of the choruses illustrated the various exotic tableaux, the principles remained rather plainly and simply dressed in their anguish. Lisa was in simple, contemporary black and white attire, the Pique Dame wore a bizarre short-shirted, pink and green concoction, clothing she shed as she slowly died.
Hermann, the obsessed gambler, masterfully enacted by American tenor Brandon Jovanovich, was from beginning to end a toy soldier in an unbuttoned red uniform. Beautifully sung through the tortured twistings of his obsessive love of Liza and his obsessive quest of the Pique Dame’s three cards (not to discount the oblique, obsessive goals of the production) he was indeed an operatic soldier of impressive magnitude. 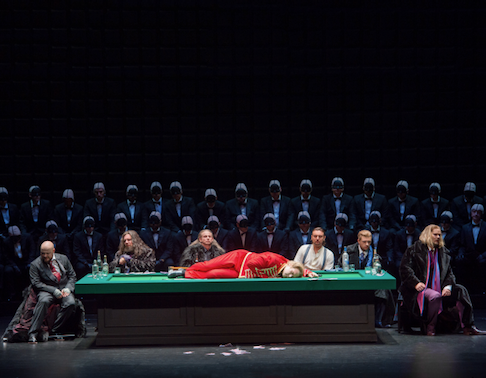 The death of Hermann, plus all named male characters
Mr. Jovanovich’s heated performance was in contrast to the distant involvement of Russian soprano Eugenia Muraveva as Liza. Mlle. Muraveva is an excellent singer of elegant presence and great reserve. Both Tchaikovsky’s Liza, and last summer’s Lady Macbeth of Mtsensk (that befell her when Nina Stemme fell ill) are well beyond her histrionic range.
The Countess aka Pique Dame was portrayed by 75 year-old, once mezzo Hanna Schwarz who brought little old lady confusion to this role usually taken by old divas of important presence. Mme. Schwartz delivered her death aria in a thin, dying voice, pathetic rather than moving, a performance well in keeping with the emotional void generated by the Neuenfels production.
The more direct and satisfying performances came from Russian male voiced imports — baritone Igor Golovatenko as Liza’s intended Prince Yeletsky, baritone Vladislav Sulimsky as Count Tomsky, bass Stanislavsky Trofimov as Surin, tenor Pavel Petrov as Chaplitsky, bass Gleb Peryazev as Narumov, and tenor Alexander Kravets as Chekalinski.
Equally impressive were the Russian female voices that completed the cast, Oksana Volkova as Polina, Margarita Nekrasova as the governess, Vasilisa Berzhanskaya as Mascha, and Yulia Suleimanova as Prilepa.
Michael Milenski