Elsa is to be burned at the stake for murdering her brother, the fire is lighted. A cataclysmic electrical display travels across live points on monumental insulators and conducts itself through the town clock upon which a white space ship in the vague shape of a giant moth alights (other times a swan). Elsa’s savior appears in street clothes wearing insulated gloves.
Matched by an orchestral display of appropriate proportion.
He sings but he is not tenor Roberto Alagna who would have brought his unique colors and attitudes to Lohengrin had he not cancelled three days before rehearsals were to begin. There were moments throughout evening when I could hear his voice and sense his persona, matched in so many ways to the lyricism, vulnerability and delicacy of mezzo Waltraud Meier, Wagner’s Ortrud in this production.
Polish tenor Piotr Beczala stepped in to sing his first Lohengrin. His was a spell binding portrayal, heroic in its youthful strength, of unflagging voice in its careful shaping of the subtleties of text, and profoundly moving as the tragic, failed savior of the duchy of Bramant.
In this production created by German visual artists (painters) Neo Rauch and Rosa Loy, and American stage director Yuval Sharon one is not sure how the concept evolved — to wit moths (like people) are attracted to light (enlightenment) and executed (confused) by touching its energy. As unlikely a metaphor as it was, finally, it was a powerful metaphor that took us to Wagner’s philosophical plain and kept us there, director Sharon staging the action in stultifying ceremonial symmetry to achieve solid inviolable confirmation.
The phenomenal energy introduced by Lohengrin burst the bindings holding Elsa to the stake, and this was the same energy that was to have bound her forever to Lohengrin, pulses of electricity rushing along cables into the marriage chamber as he bound her with electrical cord to a giant illuminated insulator. 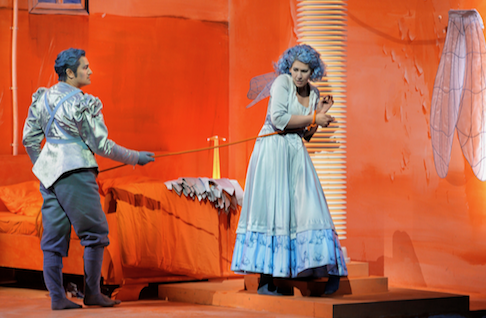 Piotr Beczala as Lohengrin and Anja Harteros as Elsa
But Ortrud had come to Elsa in a truly magical garden (mysterious foliage moving every which way) to warn her of the dangers and the insult of accepting what she must not know. Conductor Christian Thielemann convincingly led the two women to an understanding that overcame the mandate imposed on Elsa of blind acceptance of the imposed order. The radical strength imparted by Ortrud overcame Elsa’s blind ties to Lohengrin, and she was heroically able to burst the binding of matrimony in a truly magisterial musical climax.
And in the last scene Ortrud, bound to the stake to die for her participation in Telramund’s pagan, dark world, heroically burst her bindings as well. Stage director Sharon’s world is blatantly politically correct, and always a few clever and significant steps beyond Wagner’s Romantic philosophy. Mr. Sharon simply changed Richard Wagner’s ending — Elsa does not fall dead.
In a final sacrificial act Lohengrin attaches a backpack of pure light to Elsa who, with Ortrud goes forth to found, presumably, a new, enlightened world, leaving behind, presumably, the combative, male centricity of the old order. Wagner’s dream of theater as a religious rite was fully achieved and the audience went wild with its new liberation, with its rebirth into a new, maybe better world — though a world unfortunately left undefined, and certainly unquestioned.
Note that Cosima Wagner (Richard’s widow) famously went forth to preserve Wagner’s nationalistic ideals, making Bayreuth a foundation of Nazism. Note that Katerina Wagner today preserves the Wagner legacy and Bayreuth canon, and she preserves its firm national identity (no English to help a significant if small percentage of foreigners). Though Mme. Wagner has embraced electrical rather than gas lighting, and installed the latest stage machinery she has not added supertitles, thus betraying her great grandfather’s greatest theatrical ambition — an immediacy of comprehension. 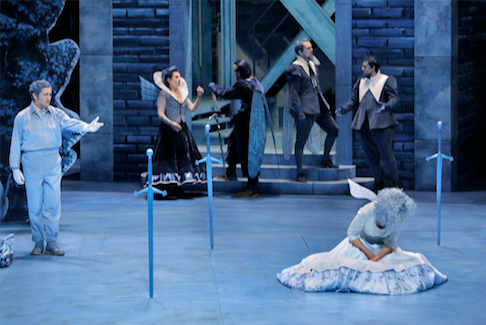 Lohengrin, Ortrud, Telramund, King Heinrich, a herald, Elsa
Painters Rauch and Loy’s world is brilliantly old fashioned in feel, painted drops the primary background. Sophistication abounded in the use of scrims, shadowy moving pieces and color. Architectural pieces and costumes superimposed the Medieval upon the Romantic, layered the industrial and modern, and confused the real with the fantastic, to wit pale, moth colored Elsa (well, until she was electric orange), not to overlook the moth wings, subtly worn by all the principles as if natural attire.
All the magic of Bayreuth’s Festspielhaus was in place — the hidden orchestra of absolute musical authority, the present acoustic that permits casting of artists of intimate intensity like 62 year-old Waltraud Meier as Ortrud whose voice very rarely betrayed its age and always found the full depth of character. The persuasive soprano of Anja Harteros kept Elsa as the focal point of this production, clearly sailing over the ensembles, never losing its inherent sweetness. Polish Tomas’s Konieczny had little to do other than be a force of darkness, Georg Zeppenfeld as King Heinrich was the benign moderator.
Conductor Christian Thielemann miraculously accomplished the required musical persuasion.
Michael Milenski