And, the performances by Romanian soprano Adela Zaharia and Swedish soprano
Miah Persson in this Prom, with the Royal Liverpool Philharmonic Orchestra
conducted by Vasily Petrenko, were certainly satisfying, completely and
complementarily.

However, the music that they performed did not hit similar heights.
Persson’s Straussian credentials were polished at Garsington this summer
where her role debut performance as the Countess in Tim Albery’s production
of


was unanimously acclaimed. Gold, silver and pearl: the adjectives bandied
about by the critics suggested that the Three Kings had come to Wormsley.
But, such effulgence was retrospectively justified by the sumptuousness,
gracefulness and purity with which Persson floated – with glorious freedom,
suppleness and coloristic range – through the four songs selected here.

Slightly reduced in forces after the interval, the RLPO glistened with the
excited heart-flutterings of a love-inflamed adolescent at the start of
‘St‰ndchen’ (Serenade) – indeed, Persson’s impassioned impetuosity evoked
the palpitating ardours of a Cherubino. After the sweet reflectiveness of
the first two stanzas of ‘Das B‰chlein’ (The Brooklet), the final verse had
a wonderful sense of new energy and confident purposefulness, lifted too by
the exuberant spiralling in the orchestral texture. In ‘Morgen!’
(Tomorrow!), Persson crafted the vocal line with simple but pure delicacy,
her melody embraced by leader Thelma Handy’s eloquent violin solo as the
delicious rubatos of the heaven-aspiring harp and the deep resonance of the
bass pizzicatos provided a fulfilling accompaniment. There was a ripening
of emotion with the declamatory “Stumm warden wir uns in die Augen schauen”
(We shall look mutely into each other’s eyes), and Petrenko exploited the
harmonic tensions in the sustained chords until feeling overflowed in the
final duet of solo violin and harp; Petrenko dared to diminuendo to a
whisper and then to nothing, and then still further into silence. The
glories of ‘Zueignung’ were over all too soon; the intensification and
apotheosis of the third stanza were thrilling. 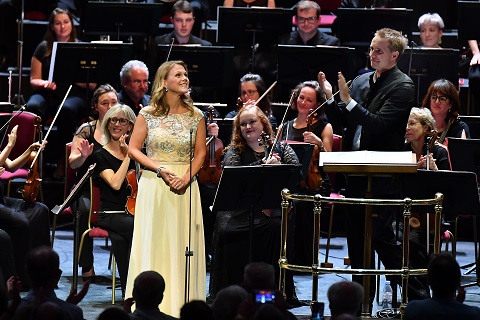 Throughout, Persson’s lovely vocal sheen held the Proms audience in still
wonderment and joy, though, if one were to quibble, perhaps the soprano
might have paid a little more attention to Strauss’s word-painting. There
was an occasional verbal-coloristic frisson, as in as ‘St‰ndchen’, when the
dusk fell beneath the linden trees – “Unter den Lindenbaumen” –
and Persson’s rich rolling of the ‘r’ – “Und die Rose, wenn sie am
Morgen erwacht” – made the flower glow with the night’s rapture; and
Strauss’s cadential falling appoggiaturas were discerningly articulated.
More of such details would have raised a very fine performance still
higher. But, the final phrase of ‘Zueignung’ said it all: “habe Dank!” Be
thanked, indeed.

Persson was replacing Diana Damrau who had withdrawn owing to illness, and
Damrau had also been the intended soloist in Iain Bell’s Aurora, a
BBC co-commission with the RLPO, written for Damrau with whom Bell has
collaborated frequently. It fell instead to Romanian soprano Adela
Zaharia to present the world premiere. Operalia 2017 winner Zaharia, making
her Proms debut here, won acclaim when she stood in for an ailing Damrau
last December in Munich, when the latter withdrew from the first
performance of the run of Lucia di Lammermoor at the Bayerische
Staatsoper. Bell’s exploration of the coloristic mystery and majesty of the aurora borealis was well served by the ease of Zaharia’s flights
into the stratosphere; the darkness and strength of her tone in the middle
and lower ranges; and by the powerful muscularity, allied with subtle
flexibility, of her soprano, which breezed easily over the varied
orchestral textures. Such qualities did much to sustain a narrative arc and
expressive focus through the three linked movements of Bell’s nocturnal
probing and wonderment. Zaharia worked hard to imbue the vocalise of the
first movement, ‘Dusk to Darkness: First Glimmers’, with expressive weight
and intent, her voice flickering and glittering over orchestral intimations
of coming night, beginning coolly and then accruing warmth, to glow with
the luminescent strength of the sky’s display of dancing of electrons and
photons. She slithered provocatively and fierily – and with impressive
precision – through the frolics of ‘Night-time: Lights Come Out to Play’,
rising exuberantly to climactic vocal peaks and soaring over the flourishes
of full-textured orchestral playfulness. In ‘Dead of Night: Phantom
Shadows’, her florid outbursts were delivered with deceptive ease,
untroubled by the aggressiveness of the orchestra’s rhythmic repetitions,
brassy challenges and percussive onslaughts. And, in the closing stages, as
the sustained low pedal dissipated into the ether, Zaharia shaped the
voice’s final declaration of the supremacy of light most beautifully. 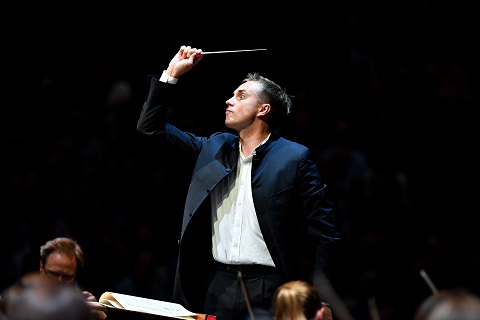 The work itself, I found less convincing. Bell certainly knows how to
exploit orchestral timbres and how to tint textures with flashes of colour,
light and tactility. The ear was teased with myriad gestures; one could
never anticipate from whence or which instrumental voice would speak, sing,
stutter or demand, then disappear back into the shimmering mass. Petrenko
shaped the evolving hues and episodes with a sure sense of pace and
atmosphere, and, particularly in the central movement, ensured that we
appreciated the teasing dialogues between voice and orchestra, in a manner
of a ‘traditional’ concerto. But, it’s difficult to sustain a sense of
expressive focus through twenty minutes of vocalise, however inventive the
instrumental effects; and, in a work centring on colour and conflict, it’s
a pity that harmony played a less significant role in Bell’s pictorial
arsenal. Overall, what I missed most was the mythic poetry of the aurora borealis, though I certainly hope that we get another
chance to hear Zaharia perform in the UK soon.

The vocal items were framed by two exuberant scores in which Petrenko
inspired some committed and virtuosic playing from the RLPO. Elgar’s In the South opened the Prom with a blast of Mediterranean heat,
sunshine and out-of-doors joie de vivre, though it was the
tenderness of the strings’ playing during the episode depicting the
shepherd’s pastoral idyll – a lovely, warm viola solo from Catherine
Marwood – which was most stirring. BÈla BartÛk’s Concerto for Orchestra allowed the RLPO to demonstrate their
individual and collective prowess. The Introduzione offered
contrasts of blackness and brightness to complement Bell’s night-time
vistas, while the snareless side-drum was an exacting master in Giuoco delle coppie. The central Elegia was somewhat
restrained, and Petrenko thus did not emphasis the characteristic
arch-structure of the work, but the extremes of decorum and boorishness
were entertainingly exploited in the Intermezzo interrotto, while
in the Finale: Presto Petrenko threw the orchestral caution to the
wind in spectacular style. We needed the gentle beauty of the RLPO’s encore
– Rachmaninov song, ‘Zdes’ khorosho’ (All is well here), transcribed for
orchestra by the orchestra’s principal horn, Timothy Jackson – to remind us
that, indeed, all was well.