If the text is religious, the music can seem apocalyptic, coruscating,
relentless – and even agnostic. Hans von B¸low, even before he had heard
the work, described it as “Verdi’s latest opera, though in ecclesiastical
costume”, and for some (though not Brahms), this view remains a valid one.
But the scale of this requiem, and the miracle of its orchestration and
vocal writing, rather prove the opposite: Where else, except perhaps in
Mahler’s Resurrection, does the power of trumpets, on-stage, and
antiphonally off-stage, take you towards the precipice of religious
cataclysm? In what other sacred work does the timpani sound like a hammer
against an anvil? And is there a darker, more sonorous, and bleaker, ‘Amen’
than the one that Verdi writes at the close of his ‘Dies Irae’?

Great performances of Verdi’s Requiem are rare in my experience.
They fall short for all kinds of reasons – and yes, the worst do treat this
work as an opera. The young Columbian conductor, AndrÈs Orozco-Estrada,
making his Proms debut with this work – as Lorin Maazel had done almost
fifty years ago – clearly sees Verdi’s work in very sacred terms. This was
in no sense a hard-edged, or even driven, performance in the Solti mould –
but nor was it one that lingered over phrases to the point of paralysis as
Maazel was wont to do in his later years. That is not to say that
Orozco-Estrada doesn’t take time to illuminate details of orchestration.
The woodwind phrasing was luscious, for example – but given this
conductor’s ear for ravishing sonorities in a work like Strauss’s Ein Heldenleben this didn’t overly surprise me.

It’s difficult to sustain drama and tension in this piece for almost ninety
minutes but for most of that span Orozco-Estrada managed to do just that.
The ‘Dies Irae’ was taken in almost a single arc and the impact of it was
entirely memorable. He brings a younger man’s sense of terror to this music
rather than the more usual sense of prophecy than someone like Giulini did.
Those indelible piccolos almost seemed to stab themselves through the
orchestra like blades, the bass drum thundered, the trombones erupted into
pyroclastic clouds of sound. This was a ‘Dies Irae’ with fire scorching
like an inferno, the horror of the Day of Wrath painted from the ink of
Verdi’s music. But there was room for great luminosity, too: bassoons were
sculpted, not just phrased, flutes fluttered like angels. The ‘Agnus Dei’
had an ethereal beauty to it, and this is a conductor who can shape a pianissimo with breath-taking transparency. 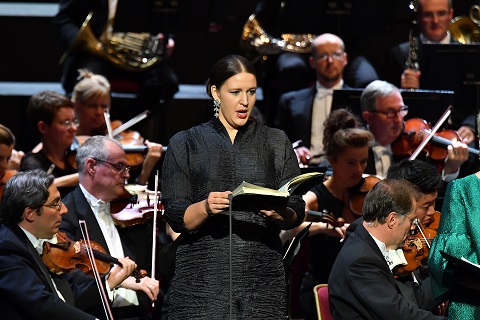 None of this would have been possible without his soloists or choir,
however. Of all the great choral works, Verdi’s Requiem is the
most difficult to cast well and this one did much better than most. The
Norwegian soprano, Lise Davidsen, I sometimes felt was a touch hard-edged.
This isn’t the most obviously beautiful, or creamy, soprano and the sheer
steeliness of her voice sometimes felt too harsh. I think anyone who was
familiar with Margaret Price in this work would have found her rather cold
– even shrill. But where it mattered the accuracy of her singing, the
brilliance of her upper register and the ability to scale her dynamics was
stunning. She definitely took some time to get into her stride; the
‘Introit and Kyrie’ wasn’t as assured as I’d have liked, but she
undoubtedly became more secure as the performance developed. Indeed, her
‘Libera me’ was a tour de force: exquisite strength, imperious
high notes and a pianissimo that was ravishing. This is a voice
that doesn’t just cut through the orchestra like a sabre; it rises
effortlessly above it as well.

The mezzo-soprano Sarah Connolly, replacing the indisposed Karen Cargill,
was magnificent. The voice is rich, yet the tone is so burnished as well,
and no-one who heard her sing would have been unmoved by the depth she
brought to her part. Perhaps the voice isn’t huge – and certainly it didn’t
have the dramatic impact that Lise Davidsen summoned at times – but the
pairing of these two voices was symbiotic. The Ukrainian tenor, Dmytro
Popov, is that rare thing: A true Verdian tenor. His ‘Ingemisco’, so often
a point of anti-climax in a performance of Verdi’s Requiem, was
staggering. The top notes ring out with a steady evenness that is as
disciplined as it is stentorian, and yet that brightness of tone belies a
really deep, unquivering lower register that is granitic. Short of stature
– it was difficult from where I was sat in the stalls to see him above his
music stand – the voice has huge presence. The Polish bass, Tomasz
Konieczny, brought the strength and terror of Wotan to his ‘Confutatis’.
Again, here was a singer who didn’t just sing his part; he brought a wealth
of vocal colour and heroic range to it. Konieczny’s voice is rock-solid at
the bottom, the final line of his ‘Confutatis’ – ‘Gere curam mei finis’ –
so sonorous you felt it would split the heavens apart. This isn’t just a
voice that has strength, however; it abounds in lyricism, too. 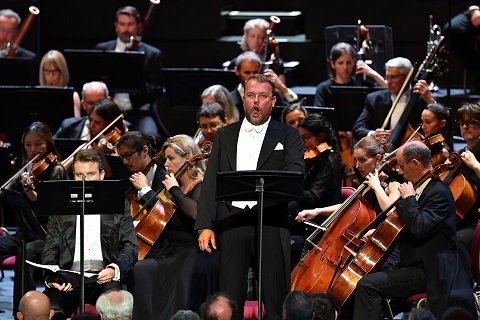 Both the London Philharmonic Orchestra, and its chorus, were fully equal to
the demands of Verdi’s score. This was a performance where neither the
orchestra, nor the chorus, overwhelmed the other. It wasn’t the weightiest
sounding Verdi Requiem I can remember; in fact, it projected a
feeling of period performance being both highly disciplined and strongly
incisive. Indeed, balances were so in harmony with each other you often
felt the whole requiem was like a slow, blossoming flower. Moments like the
opening of the ‘Introit and Kyrie’ were exquisitely poetic, defined by
playing that was almost inaudible, barely above the level of a ghostly
whisper; yet, on the other hand, the ‘Sanctus’, with its double fugue and
double chorus, was a triumph of vocal clarity.

This was a sublime concert, magnificently performed and interpreted, and a
very notable Proms debut from its young Columbian conductor.