The original production directed by the late Edward Hastings with scenery designed by Robert Innes Hopkins and costumes by David C. Woolard has been well traveled (15 North American companies) since its acclaimed debut in 2002. Updated to 1920 or so, Mr. Hopkins has devised a pop-up of a set, with the large raised stage platform floor opening up to form a back wall and revealing a 3-D greeting card of a Moorish palace. Set pieces are similarly cleverly created by cast members magically unfolding them from the floor.

The visual delights were continued as Mr. Hopkins had a field day summoning up colorful “Algerian” attire that defined a political power structure with its wide variety of social stations. Elvira and Zulma were lavishly decked out in richly detailed harem dress. Only Isabella and “uncle” Taddeo were in period Italian dress, she as a sleek, independent aviatrix who crash-landed her plane (vice: arriving during a shipwreck) in an attempt to rescue her love, Lindoro from the imprisoning Bey.

Isabella’s bi-plane was an added character in the comedy, first appearing in miniature “flying” through the audience (held aloft by a stagehand on a stick) during the famous overture, disappearing behind a concessions stand, then reappearing on stage “flying” on wires in progressively larger versions, until it is clear it has struck land offstage. A life-sized model is revealed together with the title heroine during the introduction to Cruda sorte. 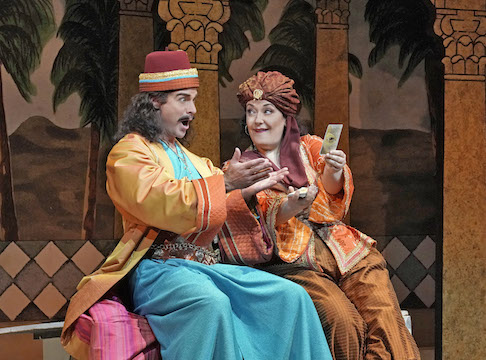 Daniela Mack has every bit the assured star presence needed to carry the show. From her opening aria to her last note, Ms. Mack lavished the role with virtuosic singing worthy of a grand tradition. The sparkling ease of her rapid-fire coloratura was characterized by a distinctive, glowing tone that was even from top to bottom.

If anything, the extremes of the writing liberated her to hurl fusillades of thrilling top notes, counter-balanced by persuasive, imposing chest tones. Moreover, the accomplished mezzo is a poised actress and cuts a beautiful, lanky figure as the strutting, self-assured pilot. No wonder Mustafa is attracted to her. We all are.

Jack Swanson (Lindoro) can be added to the short list of top tier Rossini tenors. His brilliant, focused lyric instrument has a captivating color, and his effortless execution of endless racing melismas was jaw dropping in its elan and artistry. Mr. Swanson is enthralling not only for his assured, stylish vocalizing but also for his amiable, boyishly handsome stage presence. He brought the house down with his first aria, capturing our hearts, and then came back for the rest of us with a wonderfully detailed interpretation. Watch this talented young man’s star rise rapidly in coming months.

Scott Conner is a refreshingly different Mustafa, his substantial, pointed bass eschewing the more usual blustery, fussing buffo take on the role. Mr. Conner has a pompous, insinuating presence and his insistent vocalizing brought great determination and depth to the character. His fleet-tongued patter was astounding in its accuracy and clarity. He was ably complemented by Patrick Carfizzi as Taddeo. Mr. Carfizzi has a substantial, mellifluous bass that shone splendidly in his Act II aria, which was a virtual feast of sonorous tone and characterful nattering. As a shameless, rubber-faced, loose-limbed comedian, Patrick also evinced some of the evening’s best laughs. 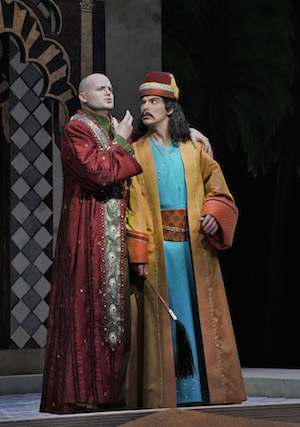 Giving him close competition, Craig Verm clearly relished his hijinks (and low jinks) as a highly excitable Haly. Mr. Verm is possessed of one of the finest, most mellifluous baritones of his generation and his pronouncements rang out with great presence in the house. His generous rendition of Haly’s aria was one of the evening’s many highlights. But he is also not afraid of coloring his fine voice in service of the comedy and his obvious enjoyment of his assignment is infectious.

Apprentice Stacey Geyer more than held her own among this stellar group, her polished, glistening soprano sailing above the staff with an easy beauty. As her confidante Zulma, Suzanne Hendricks had a wicked sense of fun, and revealed an accomplished, substantial mezzo with a luscious sheen.

Corrado Rovaris reigned supreme in the pit, leading a fizzy, propulsive, idiomatic reading that found the responsive orchestra in fine form. Maestro Rovaris found a good balance between breathless patter and sustained phrases, and ensured the all-important Rossini crescendo effects were served up with a rising tension and increasing excitement. If his gusto occasionally challenged his singers’ breakneck elocution, the effect was that it galvanized them to pick up the gauntlet, and the high energy result was exhilarating.

I did not see Mr. Hastings’ fondly remembered original production, but I can attest that Shawna Lucey has staged an endlessly varied, wildly inventive, flat out rib-tickling rendition that capitalizes on the strengths of the original concept. The comic business was character specific and well executed. I might have done without the trickery that the telegrams Mustafa was typing turned out to be anachronistic tweets. Ditto the overlord putting his name all over the buildings. And posing for a photograph with a lion he shot. And damn if I didn’t laugh at it all!

Ms. Lucey has not only done fine, illuminating work with the solos and small ensembles, but most remarkably she has peopled the stage with interesting groupings and interaction from the entire cast. Susanne Sheston’s chorus goes from strength to strength this summer, and they not only sang with rousing accuracy, but also threw themselves into the staging.

Several of the best massed numbers required great personal investment from each and every person on stage. The Act I finale espoused three times as much energy as any dance number in Mamma Mia! and with far better music. If you didn’t bop along in your seat as the entire cast uninhibitedly busted moves as they shimmied and boogaloo’d and twerked and jerked, well, you must have been at the wrong address.

In a festival where we have seen the tragedy of a geisha, the test of a nuclear bomb, a sardonic sampling of Voltaire’s cynicism, and a “dramedy” that pointedly pontificates the value of high art over entertainment, it is perhaps fateful that I ended my time in Santa Fe with a mightily classy form of amusement.

L’Italiana in Algieri sets out to entertain, albeit with first class musical values in service of a masterful score, and entertain it does. We don’t have to choose. We can simultaneously have high art “and” belly laughs.