It’s taken sixty years for Vanessa to receive a fully staged
performance in the UK, though the opera was presented with reduced forces
at the Royal Northern College of Music in 2011 and the Lyric Hammersmith in
1999, as well as in concert performance at the Barbican in 2003. Recently, Vanessa has been a more regular visitor to the world’s opera
houses, notably at Santa Fe

(both in 2016). Warner’s Glyndebourne production communicates a strikingly
compelling commitment to and belief in the opera, offering considerable
compensation for the long delay. The opera is replete with ghosts and gaps
which seem designed to deny us full understanding. Ambiguity and
inscrutability can possess their own power, but Warner seeks to illuminate
the hidden and the unclear, to bring the secrets into the half-light,
constructing a historical and psychological narrative while retaining the
opera’s elusiveness, and the result is dramatically persuasive and
powerful.

During the troubled, agonised strains of the orchestral introduction, Emma
Bell’s Vanessa stands centre-stage, in obvious distress, the flaming
intensity of the score communicating Vanessa’s psychological fragmentation
and anguish. Through a glass window, a woman is glimpsed, giving birth.
Vanessa’s first words are, “No I cannot understand why he has not arrived
yet.” She is speaking of Anatol, her long-lost lover, whose return she
anticipates with restless excitement. The handsome man who actually arrives
is Anatol’s son, who shares his late father’s name. Is this ‘imposter’
Vanessa’s son? Is that why the aged Baroness refuses to speak to her
daughter? Given that Vanessa, after her initial dismay, accepts the younger
Anatol as a substitute for her former love, Warner’s insinuation ties the
knots which bind past and present even more tightly, and tragically. And,
perhaps it is telling, as Warner suggested in a recent interview, that the
book which Vanessa snatches from Erika whom she accuses of lack of passion,
“You do not know how to read. You have never known what love is”, is a copy
of Oedipus.

Past and present are brilliantly fused by Ashley Martin-Davis’s designs and
Mark Jonathan’s lighting. Gian Carlo Menotti drew one of the central
symbols of the libretto from one of Isak Dinesen’s Seven Gothic Tales, ‘The Roads Round Pisa’, in which the narrator
explains, “When I was a student my friends used to laugh at me because I
was in the habit of looking at myself in the looking glasses, and had my
own rooms decorated with mirrors. They attributed this to personal vanity.
But it was not really so. I looked into the glasses to see what I was like.
A glass tells you the truth about yourself.” The mirrors in Vanessa’s
mansion have been shrouded for twenty years, stopping the clock and thereby
avoiding confrontation with the illusion-shattering effects of time. As she
tells Anatol, “I have scarcely breathed so that life should not leave its
trace and that nothing might change in me that you loved.” 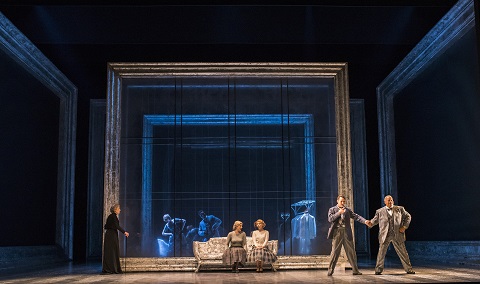 Warner and Martin-Davis uncover the mirrors: huge flickering repositories
framed in antique silver which line the stage and are swivelled, with
sleight of hand, across it. The glass is hazily transparent and
reflectively silvered. As Jonathan flecks the monochrome palette,
dramatized by chiaroscuro, with sepia and blue tints, reflections of the
opera’s characters merge with ghosts of the past glimpsed through the
deceiving glassy surfaces, in a surreal dance of time which conjures
unsettling and unanswerable questions about history and identity. There’s
an immersive, cinematic fluidity to the movement on stage (Movement
Director, Michael Barry), and it’s intensified further by the use of
cinematic projections (Projection Designer, Alex Uragallo) – soft-focused
portraits, gothic forests – which draw us into other times and worlds. And,
the film noir visual style is complemented by the expressionist
qualities of Vanessa’s most impassioned vocal hysteria and Warner’s
judicious use of stylised gesture. 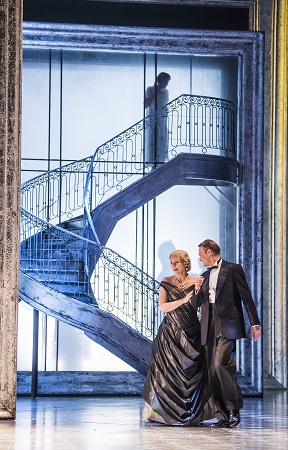 Warner has, too, an excellent eye for a telling detail that can make its
mark with understated pertinence. As Donnie Ray Albert’s warm-voiced and
big-hearted Old Doctor sits alone on a chaise longue, sadly reflecting on
Vanessa and Anatol’s imminent departure to Paris and on the loss of Erika’s
child, he fingers his silver pocket-watch, “Vanessa was once a child too”,
before slipping it into the travelling trunk beside him. Vanessa has sought
to run from time, to fiercely grip the past, but it cannot be evaded.
Indeed, Anatol, in a characteristically theatrical plea, urges her to leave
the house and follow him into the future: “Love has a bitter core. Let your
love be new as were we born today.” The Doctor’s gesture serves to make
Vanessa’s wedding gift to Anatol even more poignant. Initially Anatol
refuses to remove the present from the marquetry box which houses it, and
the gift remains unidentified until the closing scenes when a servant
appears, bearing a valise, from which Anatol removes the box and then,
slowly, the gift, placing a gleaming gold watch on his left wrist.

The Old Doctor can appear a Chekhovian figure of fun – a family friend who
has a warm heart who is gently ridiculed for his buffoonery. And, Donnie
Ray Albert’s drunken yearnings for the fulfilment of his poetic leanings do
offer a welcome respite from the relentless anxieties; moreover, he is ably
complemented by William Thomas’s flamboyant Nicholas, the Major-Domo who
kneels to clutch and stroke the ball guests’ fur coats, lamenting
extravagantly that this is the closest he will come to such women. 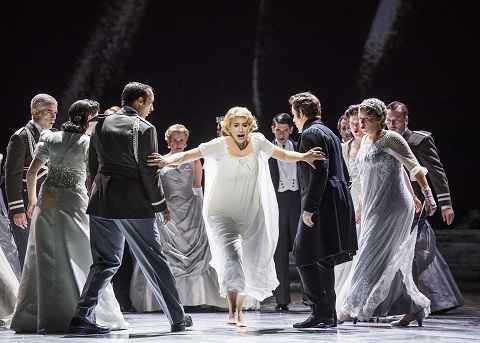 But, Warner adds layers and dimensions to the characterisation, drawing on
hints in the text, and allied with Ray Albert’s sumptuously engaging
bass-baritone wins our sympathy for the man who, so Warner infers, has
carried out the abortion on Erika’s child. Before Erika, crazed by her
pregnancy and the announcement of the marriage to be, dashes into the cold
darkness and is engulfed by the cinematic forest, the Doctor is seen at the
side of the stage; is he beckoning her? As she staggers recklessly onwards,
the filmic focus sharpens then retreats, unsettlingly; her destination
seems to be a small hut in the heart of the wood, but before she can enter,
the closing mirrors have shut out the chink of light and the vision
vanishes. Personal pain and regret are thus redolent in the Doctor’s
reflection that though he has delivered many children, the lost ones can
never be replaced.

One might accuse Warner of filling in too many of the opera’s silences
which are integral to the ‘meaning’, and there are occasional visual
commentaries which might be thought to go a step too far towards
elucidation. But, in fact, in the early versions of the opera, Erika’s
decision to abort Anatol’s child was both less ambiguous and more prominent
in the score. In ‘His Child … Must Not Be Born: Revising Erika in Samuel
Barber’s Vanessa’

, Stephanie Poxon scrutinises the sketches and versions of the piano and
vocal scores, the composer’s holograph manuscript, and the 1964 revised
score, and shows how what was an emphatic statement in the creators’
original plans was gradually diminished in specificity and dramatic impact,
as Erika’s attempt to force a miscarriage by running into the snow was
altered to attempted suicide, and ‘His child must not be born’ was
modified, first to ‘shall not’, and finally to simply ‘His child
…’. Similarly, the extended, melodically wide-ranging, syncopated
chromaticism of Erika’s first statement of the phrase was simplified and
shortened, ‘almost spoken’.

Menotti, as a script-writer, would have been familiar with the suffocating
censorship of Hays Production Code, which stringently forbade any reference
to the subject of abortion in films, and although opera was outside the
Code’s jurisdiction, reviews of the first performance did criticise this
aspect of the opera, though taking care to avoid the word ‘abortion’.
Indeed, composer Robert Evett, writing in New Republic on 27 th January 1958), restricted himself to the observation that,
‘in the course of the opera, an unmarried party gets pregnant and a lot of
unpleasant things happen’. Barber scholar Barbara Heyman’s suggestion that
the revisions were made to encourage more regular performances of the opera
seems feasible.

Warner’s centralising of these issues – Anatol’s possible parentage,
Erika’s abortion – serves to clarify what previously had remained
uncertain, but it also foregrounds Erika’s confused identification with
Vanessa, no more so than when she tell her grandmother that the child will
not be born and is met with rejection and silence of the kind Vanessa has
suffered from the Baroness for twenty years. 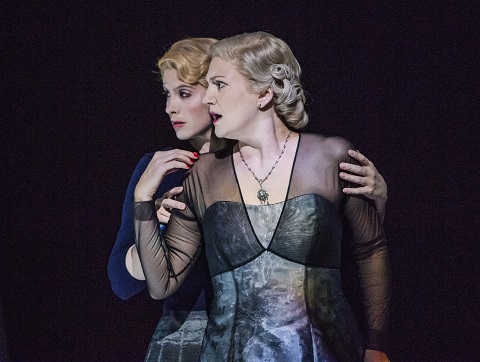 The cast are tremendous, and their performances make Warner’s concepts
utterly persuasive. Emma Bell is a painfully fragile Vanessa who veers
between elated rapture, soaring gleamingly at the peaks, and agitated
restlessness. Like Tennessee Williams’ Blanche DuBois, Vanessa is feverish
from the first and Bell uses the florid ornamentation and chromatic
disruption of the vocal line to convey her impetuousness and her anguish.
Her distress at her lack of understanding of her niece’s torment, and the
gentle delivery of her avowal upon departure, “I love you Erika. I have
always loved you.”, win some sympathy for Vanessa, but it is Erika whose
plight is most tragic, and Virginie Verrez skilfully exploits the
comparative lyrical simplicity of Erika’s melodies to allow us into the
young girl’s heart and mind.

The first we see of Anatol is an iconic silhouette, leaning louchely
against the mirror frame-wall and lighting a cigarette. Edgaras Montvidas’
beautiful tenor conveys every ounce of the manipulator’s charm and poise,
and while Montvidas acts skilfully to ensure that we appreciate both
Anatol’s essential weakness and his self-serving Machiavellianism, it’s
easy to understand why both women are so immediately and comprehensively
deceived and seduced. Moreover, the tenor effectively portrays Anatol’s
flights into theatrical hyperbole – occasions for some of Menotti’s most
fancifully self-indulgent poeticism – as in the Act 3 duet between the two
lovers in which both Bell and Montvidas venture into rhapsodic unreality. Rosalind Plowright’s Old Baroness is a terrifying portrait of
moral rectitude; though physically frail, the Baroness is a commanding
presence, her silence both the judge and the punishment. 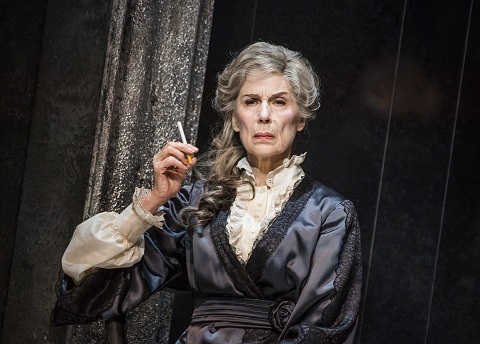 Conductor Jakub Hr?öa led a searing reading of the score. The wonderfully
impassioned and accomplished playing of the London Philharmonic Orchestra
conveyed Barber’s unwavering intensity but Hr?öa ensured that we were not
overwhelmed by the music’s emotional excess, allowing for moments of
lucidity amid the high-wire hysteria which increasingly dominates.

Menotti described Vanessa as a story of ‘two women … caught in
the central dilemma which faces every human being, whether to fight for
one’s ideals to the point of shutting oneself off from reality, or to
compromise with what life has to offer, even lying to oneself for the mere
sake of living’. At the close, after all the secrets and lies, illusions
and evasions, the lament for the five principals offers a choric statement
of truth, expressing pathos at the futility of the characters’ delusions:
“Erika, Erika, only to kiss the imposter!” Erika orders the mirrors to be
masked once more, but though the grey curtains drape heavily, the
reflections are not extinguished. As Verrez’s Erika makes a slow dignified
progress across the stage, a figure trails her in the glass – her own
reflection, or the ghost of Vanessa twenty years before? Warner seems to be
suggesting that one can never erase the truths of time that reside in the
soul.