The late Mr. Crosby founded the festival, of course, and Ariadne was included in the inaugural line-up. By the time he retired, Maestro had conducted some 567 performances, 171 of them Strauss operas. This new production is the fourth in the work’s history here, and makes a solid case for the opus. From first to last, the cast is peopled with some of the leading practitioners in the field.
Amanda Echalaz is quite a galvanizing presence as Ariadne, her dark-hued, voluminous soprano a mighty force to be reckoned with. This is an instrument of not only immense power, but also possessed of a warm elegance. Ms. Echalaz is capable of pinning you back in your seat one minute with imperious suffering, and tug at your heart the next with exceedingly persuasive pianissimi. 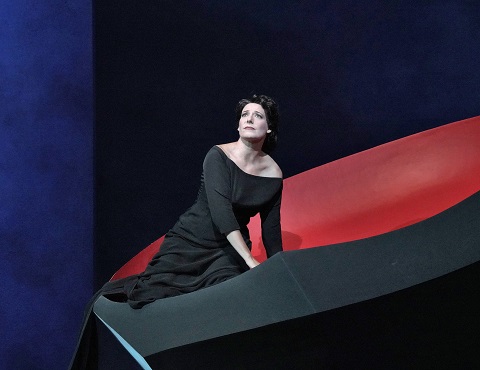 Amanda Echalaz (Prima Donna/Ariadne). Photo credit: Ken Howard for Santa Fe Opera 2018.
Like other notable large voices, the outpouring of rich sound can sometimes supersede the enunciation of every consonant, and an occasional unsteady soft high note betrayed her otherwise sound musical technique. Nonetheless, this was a pleasing and effective role traversal that aspired to sweep all before it.
Liv Redpath was quite an accomplished Zerbinetta, with a virtuosic command of coloratura, a decent sense of comedy, an endearing charisma, and a crystalline tone that proved a winning combination. The slight graininess to her fluty soprano makes it fall very engagingly on the ear, but a generalized stage presence meant that a very conscientiously vocalized Groﬂm‰chtige Prinzessin fell just the short of the tour de force it can be. 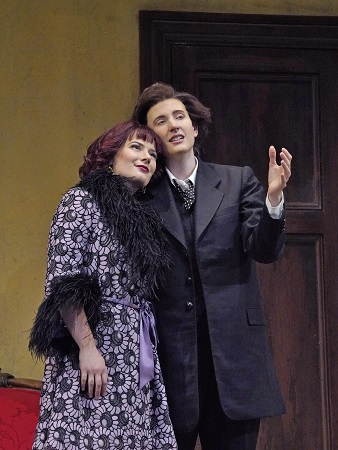 Liv Redpath (Zerbinetta) and Amanda Majeski (Composer). Photo credit: Ken Howard for Santa Fe Opera 2018.
Bruce Sledge brought a highly attractive, clarion tenor to the role of Bacchus. Mr. Sledge’s generous, freely produced tone was wedded to a rock solid technique that allow him to assay a very pliant reading of this notoriously difficult sing. I have rarely heard anyone craft such gorgeous, arching, urgent phrases in this part. I hope he paces himself in his career to be around for many years, because this repertoire needs him now.
As the commedia quartet, pride of place must be given to the endearingly personable Harlequin of Jarrett Ott. The young baritone is at a breakthrough moment in his career thanks to various high vis projects, and he gifts this current role with a richly suave baritone, handsome demeanor, lively stage presence, and infectious sense of fun. Strauss gives Harlequin several chances to shine, and shine Jarrett Ott emphatically does. 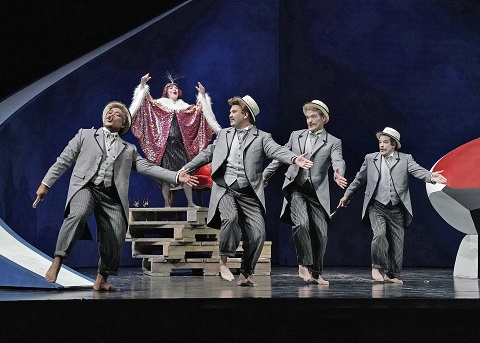 Terrence Chin-Loy (Brighella), Liv Redpath (Zerbinetta), Anthony Robin Schneider (Truffaldino), Jarrett Ott (Harlequin), and Matthew DiBattista (Scaramuccio). Photo credit: Ken Howard for Santa Fe Opera 2018.
Not to be outdone, Anthony Robert Schneider’s mellifluous bass enlivened Truffaldino, Matthew DiBattista’s substantial tenor was a perfect fit for Scaramuccio, and tenor Terence Chin-Loy’s gleaming tone successfully caressed Brighella’s high-flying passages. Together, the four of them were a well-oiled machine, strutting, dancing, cavorting and of course, singing remarkably well. On the distaff side of the “opera” proper, Meryl Dominguez (Najade), Samantha Gossard (Dryade) and Sarah Tucker (Echo) provided consistently alluring singing, whether singly or together.
If anyone owned the Prologue, it was likely veteran Rodney Gilfry, giving a bravura performance as the put upon Music Master. Mr. Gilfry was in fine fettle, his robust baritone rarely sounding better. His commitment and animation dominated his every scene. That is not to diminish the dynamic accomplishment of Amanda Majeski as the earnest, anguished Composer. While I tend to prefer a mezzo in this part, Ms. Majeski’s compelling, penetrating soprano made a fine case for the role. I only wished her interpretation had been a bit less relentless and a mite more nuanced. 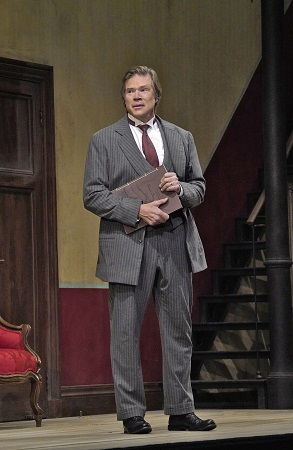 Rod Gilfry (Music Master). Photo credit: Ken Howard for Santa Fe Opera 2018.
In a spoken role, Kevin Burdette provided a Masters Class in condescension as the amusingly smug Major-Domo. Brent Michael Smith’s luxurious bass served up solid singing as the Footman, while Jarrett Logan Porter’s warm baritone made for a pleasant turn as the Wigmaker. Lithe and sprightly Brenton Ryan was an animated Dancing Master, and his pointed tenor was deployed with skill and aplomb. Jesse Darden’s assured tenor made the most of his time as the Officer.
Conductor James Gaffigan elicited admirably idiomatic playing from his pit musicians. This is a tricky score, with a reduced orchestration, and Maestro Gaffigan not only crafted soaring ensemble effects with this smallish band, but also drew out the very best solo playing from this talented assemblage. The often prankish, chamber music accompaniment was always wedded seamlessly with the singers. And the gossamer effects at opera’s end were fully realized, and delightfully rendered.
The physical production, while simple, was everything one could wish. Tobias Hoheisel was the accomplished set and costume designer, the former slightly more effective than the latter. The Prologue is set in a shallow, nondescript hallway upstage of which are four doors, three of which are dressing rooms, one of which is a good goof. A long staircase stage left leads to the mansion proper (we are led to believe). So in this Upstairs/Downstairs scenario, these “actors” are definitely in the “downstairs.” The four commedia men are relegated to changing behind a makeshift curtain down left.
Act II (the opera) is a marked shift from reality to fantasy. Mr. Hoheisel has devised a mysterious, upwardly swirling conical structure of an island that somehow evokes a close up Georgia O’Keefe study. The two soaring halves contain a circular playing space that is mysterious, magical and multipurpose. Ariadne’s cave stage left is more a red womb, a sort of stylish oversized Roche-Bobois pedestal chair. The simple addition stage right of a stack of classy wooden pallets, topped with a red upholstered chair balances the high culture realm of the classical opera (cave) and the low culture realm of entertainment (pallets). 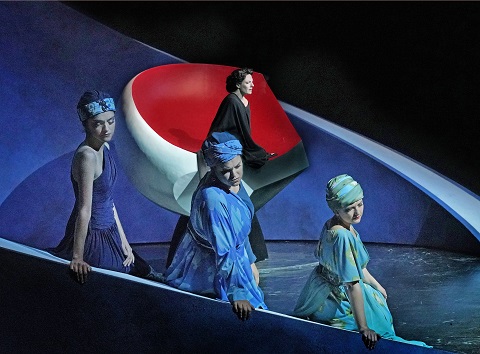