Castellucci creates theater as Richard Strauss creates music. It is a language all its own, though sometimes of concrete reference it is usually an abstract flow of stimuli that create their own reality.
Here Castellucci has made a Salzburg Salome. Starting with the Latin “te saxo loquuator” (what the stones may say to you), a phrase found only in Salzburg where it is inscribed above the entry of the 18th century tunnel connecting old Salzburg with a later Salzburg built beyond its famous mountain.
Castellucci inscribes the phrase on a cloth that covers the massive galleries cut into the cliff behind the old riding school theater where he holds us in silence, save a cricket sounding. Finally the cloth parts to reveal that the galleries have been filled in with stone creating a gigantic cavern. Specific images appear, Salome in a white dress stained by menstrual blood standing on the huge mirrored floor, a displaced disk revealing a black hole. 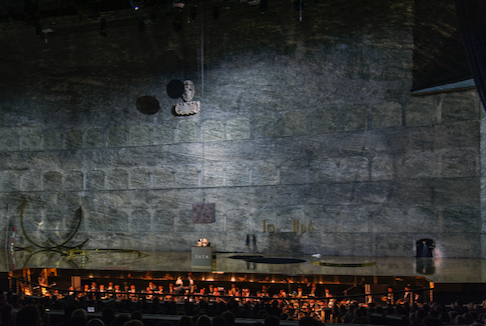 The dance
Only when we have fully entered into Castellucci’s theater does the Strauss music begin. The players of the Vienna Philharmonic and maestro Franz Welzer-Mˆst become very present in the Castellucci’s theater world — they themselves in fact become the dance that dooms the 15 year-old princess — Salome herself folded, immobile on a pedestal during the dance, a huge square cut stone slowly descending to crush her under its massive weight (sublime choreography by Castellucci collaborator Cindy Van Acker).
Castellucci’s implacable stone world reflects everything except the black voids he creates for the prophet’s aura and for Herod’s doom. There is no color save the occasional lightening flashes of brilliant red or blue and the painted red faces of Herodes, Narraboth, and the black-hatted Jews and the Nazarenes, and the huge gold, rolling wine chalice that links the brass horns of the pit to the stage.
A live black stallion dances a vista in Jochanaan’s cistern to Salome’s orchestrally created sexual fantasy. It is the stallion’s severed head that is then presented to Salome. In the final moments of the opera Salome herself descends into a pit — the final image of Castellucci’s theater is Salome’s head, a deathly silver light illuminating her face.
Like all productions in the Felsenreitschule (the name of the old riding school theater) Castellucci’s Salome is site specific. Thus I have spoiled nothing for you by revealing a few of its more striking images — the production is and will always be unique to these stones of Salzburg and its festival and for all that this may mean.
The sine non qua of the Castellucci production is its protagonist, Lithuanian soprano Asmik Grigorian. Diminutive, lithe, of fresh and beautiful voice to her death and dramatically expansive in her movements this extraordinary artist was as real and vivid a presence in Strauss’ account of an adolescent awakening as was the black stallion that was Jochanaan. 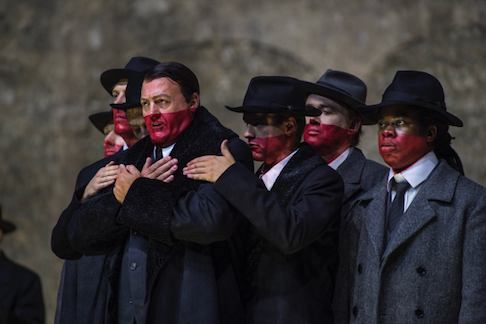 John Daszak as Herod
The prurient world surrounding Salome’s innocence erupted into a frenzy of battling images, during which the salient image was the cleansing of Jochanaan’s blackened body. Conductor Welzer-Mˆst’s orchestra created a frantic orgy of argument clearly visible in the a vista pit. The physical presence of the Vienna Philharmonic within the confines of the Castellucci theater world engendered a toxicity of enormous and hugely indulgent proportion.
English tenor John Daszak was the stark Herodes, his tormented spirit dominating every moment of Castellucci’s theater. Hungarian bass-baritone G·bor Bretz menacingly rang out his prophecies and admonitions shrouded in blackness. The pleas and imprecations of Italian mezzo soprano Anna Maria Chiuri’s Herodias were largely overlooked in the fracas of Castellucci’s powerfully masculine world, Salome its innocent victim.
Michael Milenski