As the more “traditional” offering in the O18 Festival, director Laurent Pelly has nonetheless helmed a potent, uniquely stylized staging of this perennial favorite with a decidedly sinister underbelly. With more contemporary resonance than is comfortable, Pelly emphasizes the subjugation of Lucia, forced into a politically expedient marriage by a mentally and physically abusive brother.
Lucia’s squirm-inducing confrontation with Enrico, followed by the lying, emotional manipulation by Raimondo portend her descent into madness with brutal clarity. This Lucia is visibly troubled from the outset, and Pelly/Rae have developed a physical manifestation for the girl that makes us fear for her well-being, long before the wedding. 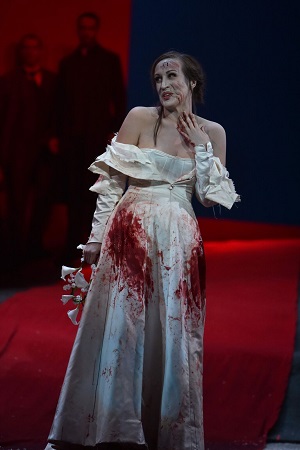 Lucia (soprano Brenda Rae) re-emerges at the wedding festivities, covered in Arturo’s blood. Photo Credit: Kelly & Massa.
The luminous soprano Brenda Rae was a Donizettian’s dream, singing with poised limpid tone, savvy musical execution, and flawless coloratura. This was an utterly perfect match of artist to role. I was already convinced that no one is singing this famously difficult part better when I saw her do it in Santa Fe last summer. But unlike that flaccid staging, Pelly and Rae have collaborated to realize a staggering theatrical portrayal to match its musical eloquence.
Ms. Rae’s hapless heroine is afflicted with alarming physical tics, a slight stoop to the side, uncontrollable pumping of the fists and arms, as if fending off physical violence such as is visited upon her in her duet with her brother. Her consistency in maintaining this physicality was a motivic visual, informing us of how relentlessly her brother must brutalize her. It also inexorably builds in intensity after her unwarranted rejection by Edgardo, and her forced wedding to another patriarchal bully, Arturo. “That” she is going to snap is certain, even if “when” is not. It is to the great credit of all concerned that this thrice familiar story throbbed with emotional spontaneity.
Brenda Rae is a wonder in this repertoire. Her attractive lyric instrument has good bite and power, and she never needs to push to make her effects. Her intelligent delivery of the text invests each phrase with truth and empathy, and her unerring sense of line is a joy to hear. Florid passages are not only technically flawless but also theatrically vital. Her alluring tone is even from top to bottom, and her stage demeanor exudes star quality. There is no finer Lucia in her generation of young singers.
I am also an admirer of tenor Michael Spyres, his solid, rolling tenor possessed of uncommon beauty and vitality. Mr. Spyres has all the goods to succeed in the notoriously daunting role of Edgardo. He has an enviably good extension at the top of the staff, and if one or two of the highest reaches were slightly veiled, he knows just how to use his gifts, and knit them together to make a splendid impression. He has also gained in stage presence since last I saw him, presenting a dramatic persona that had an engaging natural ease. 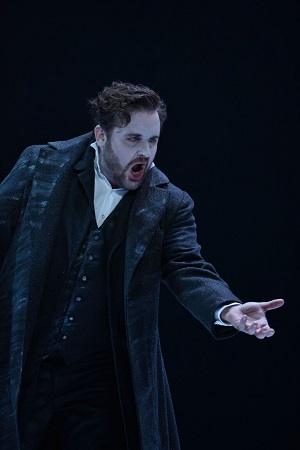 Michael Spyres as Edgardo. Photo Credit: Kelly & Massa.
As Raimondo, Christian Van Horn’s very first portentous utterance announced: “Star bass!” This lanky singer not only cuts a handsome figure but also sings with laser-focused, persuasive intensity. Already hailed as a prodigiously promising talent, on the basis of this overwhelming performance, I would say the promise has been fulfilled. The excellent baritone Troy Cook has such a self-centered character to portray as Enrico, and he immerses himself into it with such convitcion, it is almost hard to stop hating him long enough to realize he is singing superbly. Mr. Cook’s buzzy, responsive baritone is a thing of great beauty, with a rock solid technique, thrilling in the exposed climaxes.
The minor roles were cast from equal strength. Andrew Owens’ bright, steady tenor made the most of Arturo’s brief assignment; tenor Adrian Kramer was a suitably brash presence as Normanno, his solid vocalizing having a hint of baritonal richness; and Hannah Ludwig’s Alisa was served by an unusually plummy, opulent mezzo that made an especially notable contribution to the famous sextet. Elizabeth Braden’s exceptional chorus not only sang with stylish elan, but also executed the complicated staging with aplomb.
Corrado Rovaris knows his way around every note of this atmospheric score, and he paced the show with stylistic acumen. Maestro Rovaris has a keen sense of theatre and he flawlessly partners the orchestra with the singers, ebbing and flowing as they live the drama together. The ardent vitality in the pit supports the unfolding tragedy with a characterful presence.
Chantal Thomas is a frequent collaborator with Mr. Pelly, often with playful, jocose set designs. On this occasion Ms. Thomas has crafted an eerie, almost spectral look, setting the tale first on a set of foreboding snow-covered hills, with a non-descript stage high structure stage right that loomed with foreboding. After a moody lighted cabin appears behind the cloud-filled scrim during Regnava nell silenzio, the up right edifice revolves to form the basis of the homestead, with more and more scrim-and-skeletal-frame walls flying in, always cutting off Lucia and forcing her forward, eventually onto the apron.
In a brilliant decision, Mr. Pelly plays the wedding scene cramped onto that forward space, blocking by the inch, and reinforcing the fact that Lucia is fatally trapped in a familial web. The Wolf’s Crag scene opens Act Two in a desolate ruin that recollects the squarish structure that opened Act One. The main hall of Lucia’s madness is a startling coup de theatre, a massive solid red wall, cut high up with arrow slits, and dressed with a single wonky row of akimbo black chairs. A red carpet lines the hill from the massive doorway to the forestage. Masterful.
The show began with an hallucination, with Lucia appearing in her wedding dress atop the largest hill, only to recede as huntsmen peopled the scene. At the end, the male chorus returned to the hill to observe Edgardo’s demise as the snow took up again. Throughout, poor Lucia’s wandering faculties were underscored with startling touches. For example, Edgardo exits upstage in an overcoat during the love duet, leaving Lucia in a down right position, then reappears in shirtsleeves to complete her imagined version of the “happy ending” of the duet, now bathed in a surreal light. In her climactic cabaletta, Lucia climbs to stand, tottering on a chair. After she releases her final high note, her cry of death, she falls into a mosh pit of choristers who hoist her aloft into a blazing special, a bloodied white flower in a sea of oppression.
The hauntingly effective lighting design was by the always commendable Duane Schuler. Mr. Pelly served as his own costume designer and his muted, texture suits, overcoats, and court wear were handsomely stolid. David Zimmerman’s hair and make-up designs were effectively austere and there were even surreal streaks of primitive facial marks in one scene if my eyes did not deceive me.
I have seen many another accomplished production of this showpiece in my day, but none other quite gripped me by the collar and never let go like this one. O18’s Lucia di Lammermoor is a nonpareil melding of engrossing theatre and stunning music.
James Sohre
Donizetti: Lucia di Lammermoor
Lucia: Brenda Rae; Enrico: Troy Cook; Edgardo: Michael Spyres; Raimondo: Christian Van Horn; Arturo: Andrew Owens; Normanno: Adrian Kramer; Alisa: Hannah Ludwig; Conductor: Corrado Rovaris; Director and Costume Design: Laurent Pelly; Set Design: Chantal Thomas; Lighting Design: Duane Schuler; Wig and Make-up Design; David Zimmerman; Chorus Master: Elizabeth Braden