How to even describe it without your thinking I am as bonkers as the mad Lucia I had seen at the festival earlier in the day? Let’s start in the venue, the long Annenberg Court that is the antechamber to the awesome Barnes Foundation art collection. (A gratis visit to the art was included in the evening.)
A small square stage platform is set in the center of the space, backed by two – count ‘em – two orchestras, a larger rectangular platform to the left, a raised platform with a large blank canvas to the right, beyond which are a bank of monitor screens. Chairs are placed around the space, set within a grid defined by blue lines. Rows of curious-looking, multi-colored dollies are parked at the ready. What could this wide-ranging spread possibly add up to?
Well, quite a lot as it turns out. Star counter-tenor Anthony Roth Costanzo, Visionaire, and Cath Brittan have conspired to present an artistic “happening” where singing, dance, fine art, and video are presented simultaneously to saturate the senses and create a one of a kind, on the spot experience. The 60-minute communal performance is anchored by the substantial interpretive gifts of Mr. Costanzo, and he sings magnificently, unstintingly, soulfully, and with unerring distinction of style alternating between Handel and Glass arias. 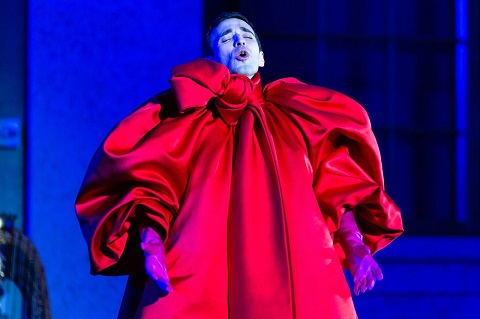 Anthony Roth Costanzo in Glass Handel, costumed by Raf Simons for Calvin Klein. Photo Credit: Dominic M. Mercier.
Anthony’s pure, pointed vocalizing has gained a bit in vocal heft since last I heard him, without losing any of the haunting, spiritual quality that informs his entrancing tone. He is an uncommonly expressive interpreter, not so much singing the vocal lines as embodying them. His participation is not only seminal to the project, it rightly dominates and inspires it.
For the audacious concept is this: Three gifted dancers will simultaneously perform, and a renowned painter will create a work of art in immediate “reaction” or “interpretation” as the arias are being presented. Dance world’s lithe and athletic luminaries Patricia Delgado, David Hallberg, and Ricky Ubeda take turns cavorting tirelessly with practiced abandon on the second stage, nimbly executing Tony-winning Justin Peck’s evocative, impromptu-seeming choreography.
Artist George Condo enters during the opening Grand Parade of performers and supers to take his place behind the large framed canvas at the other stage. Back lit like a shadow box, Mr. Condo spends the hour in silhouette painting a huge, abstract, cubist-inspired sketch that eventually filled the space and seemed at times like a magical, highly refined Etch-a-Sketch. Further afield past this canvas, video monitors screened installations, especially created for the event. 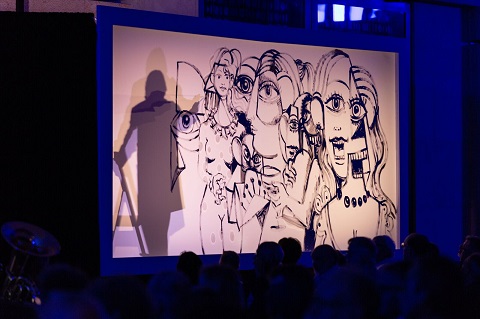 George Condo paints live at Glass Handel. Photo Credit: Dominic M. Mercier.
But wait, there’s more. Last year’s festival featured a premier of the opera We Shall Not Be Moved. In a reversal, the mantra of Glass Handel was that we SHALL be moved. Literally, and it happily turns out figuratively. For you see, fresh-scrubbed, attractive young supers manned those special dollies, and methodically moved audience members between the three staging locations. From the downbeat, a people shifter would put the dolly in place, put a hand on the shoulder to signal the intent to move the chair, tilt back and wheel the chair to a different vantage point. This was repeated with audience members in sequence.
I began directly in front of the singer, then went to the dance area, then finished in the painting area. While each had a different dynamic, all the while I was able to still enjoy the other concurrent elements. The hypnotic parade of spectators was itself a calculated element in the “performance art” nature of the project. As the music surged in the climactic aria, as the final touches and tweaks were daubed on the painting, and as the trio of dancers finally all assembled as one, the resettled audience had taken a mightily impressive “journey.” Although each element was exciting, it has to be said the real energizing presence of the evening was the towering, generous, inspiring contribution from Mr. Costanzo, first among equals.
There was so much to take in, we almost took for granted the two separate instrumental groups, one superbly essaying the Baroque glories of Mr. Handel, and the other restlessly, luminously liming the harmonies and pulsing rhythms of Mr. Glass. All this flash and dazzle would not have been possible without the dynamic and stylistically adroit conducting by Maestro Corrado Rovaris.
The technical elements were of necessity simple but competent, with Brandon Stirling Baker’s even lighting design solving many if not all of the challenges in lighting that space. Anthony’s costumes were over-the-top creations, starting with a red satin bell-shaped robe, with enormous puff sleeves that tied at the neck with an enormous billowing bow, contrasted with purple gloves. He eventually peeled that off to reveal a blue satin ball gown/shift emblazoned with Glass Handel, ending in a sort of androgynous white nightgown covered with Condo-like squiggles.
Did I mention it was revealed that the counter-tenor was prankishly wearing red satin high heels with rhinestone stripes under all that? The dancers were provocatively clad in the briefest of red briefs, with irregular rows of long red, silver, and black fringe creating cascades of visual movement. Completing the production “look,” the supers sported red tops and black slacks, while the black clad orchestra was accessorized with draped, wide red lanyards around their necks. This scintillating costume plot was created by Calvin Klein Chief Creative Officer Raf Simons. Kudos as well to stage manager Betsy Ayer who kept things flowing seamlessly.
I commend all concerned for taking this enormous leap of faith, this mighty artistic risk. There is much about this that portended that it shouldn’t work, but it did, and brilliantly, a stunning evening. The performers and creators were lavished with cheering ovations that called them back again and again. I am cheering them still: Bravi tutti!
James Sohre
Glass Handel
Music of George Frideric Handel
And Philip Glass
Countertenor: Anthony Roth Constanzo; Dancers: Patricia Delgado, David Hallberg’ Ricky Ubeda; Painter: George Condo; Conductor: Corrado Rovaris; Production: Anthony Roth Constanzo, Visionaire, Cath Brittan; Costume Design: Calvin Klein, designed by Chief Creative Officer Raf Simons; Choreography: Justin Peck; Videos: James Ivory and Pix Talarico, Mark Romanek, Tilda Swinton and Sandra Kapp, Tianzhou Chen, Daniel Askill, Maurizio Cattelan and Pierpaolo Ferrari, Rupert Sanders, AES+F, Mickalene Thomas; Lighting Designer: Brandon Stirling Baker; Production Format: Ryan McNamara; Video Consultant: Adam Larsen; Stage Manager Betsy Ayer; Rehearsal Director: Miguel A. Castillo