That was the state of play as act one of Seattle Opera’s new-ish staging of The Turn of the Screw ended. As we drifted out into the watery-sun-filled lobby of Marion McCaw Hall, I’m sure many old-timers like me (and there a lot of old-timers at Saturday matinées here) were pondering the same paradox as I: How could the dazzling local 1994 première staging of this work – Lauren Flanagan, Joyce Castle, Cyndia Sieden, Mark Lamos, John Conklin, Robert Wierzel, all at the top of their form, Richard Bradshaw in the pit – remain so much more vivid in memory 24 years later than what we’d just experienced minutes before?

When we returned to our seats – some didn’t – we were quickly reawakened. In the first act the performers had hardly been able to move beyond sparse bright-lit patches without being swallowed by the shadows of Adam Larsen’s dim, grim projections of ravaged trees and shrubbery, of architecture more penal than domestic, more Piranesi than Palladio.

In act two, Peter Kazaras’s blocking allowed them to escape, make contact. For both them and the watcher it was like being allowed for the first time to breathe freely, to feel how Britten’s extraordinarily pictorial score shivers up from the pit, hot and cold, caressing and creepy at the same time. German-born conductor Constantin Trinks may have been trying to energize the first act as well, but if so not much was getting through. In any case it was enough to keep the musical tension growing right up to the final, creepy end.

That said, it was not a staging that made the most of its resources. The costuming, by Deborah Trout, was peculiar enough to be distracting. At first the clothes seemed to suggest a post-WWII Britain. As the Governess, soprano Elizabeth Caballero spent almost the whole show in a salmon-colored twinset (no pearls) and a garish green and white lino-print skirt. Along with her stiffly-permed processed-blonde hair, the outfit made her look a great deal more like a baby-sitter than a tutor and role model.

The dithering housekeeper, Mrs. Grose, by contrast, was given rather sumptuous gowns to wear, turning the social positions of the two ladies completely upside down and rendering her occasional lapses into submissive and servant-y language inconsistent and jarring. 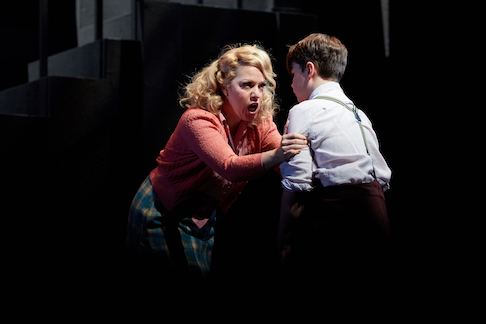 The oddity never really went away. The phantasm of the amoral footman Peter Quint looked like a hybrid of Mr. Rochester and Lady Chatterley’s lover, until turning up dressed like a Regency buck. His ghostly victim-accomplice Miss Jessel started off looking like a Renaissance portrait of a lady but rapidly descended into raddled dishevelment.

Henry James’s 1898 novella is set in a world that travels by carriage and communicates by letters by hand. Tweaks that take it out of that world just render it implausible, and a ghost story has to be plausible to work at all.

Director Kazaras does manage in the second act to get some dramatic oomph out of Larsen’s looming projections. Aided by Connie Yun’s lighting design, he turns the house of Bly itself into the threat, and the ghosts into just as much victims of its malice as the living inhabitants.

For whatever reason, though, he has not managed to allow his singers to make much of a mark. Even at his most diabolically inspired, creating ever-evolving loops and whorls of seductive menace, Britten makes dazzling waves, but the singers only ride the frisson like surfers, never able to command it.