Austrian dramatist Hugo Von Hofmannsthal, Arabella’s librettist, was nothing if not worldly and post WWI Vienna was nothing if not indulgent. This made rich ground for Richard Strauss to plow, playing seriously with Romantic ideals of love while toying with the poetic pastoralism of the Germanic Hellenistic revival, and indulging in the modernist zeal for dissecting reality.
It all became quite a celebration last night on the War Memorial stage at the first performance (of five) of this rarely performed example of the Strauss canon. The revelry was in the pit, the mighty San Francisco Opera orchestra unleashed by conductor German conductor Marc Albrecht in his American debut. Undaunted with only 67 players in the pit, a far cry from Elektra’s 100 or so, the maestro drove the score as if it had the richness and the urgency of Elektra’s obsession. The spectrum of colors, the motivic details, the phrasings and the volumes (considerable) that the maestro exploited did indeed verify masterpiece status if not outright awe for the score. They also made me long for singers and production that might equal such musical monumentality.
The well-traveled production (Toronto, Santa Fe, Minneapolis) by British director Tim Albery instead traded on the minimal. The sets and costumes by German designer Tobias Hoheisel were of utmost simplicity, a series of small, monochromatic, curving architectural elements of subdued classical detail construed the three spaces of von Hofmannsthal’s fin de siËcle hotel. Von Hofmannsthal respects the Aristotelian unities — the opera happens before, during, and after a ball in the hotel — thus Mr. Hoheisel’s costuming has limited requirements, easily incorporating abstractions of fin de siËcle opulence. 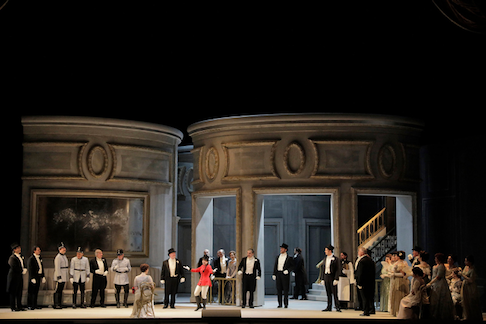 Hye Jung Lee (in red) as the ball mascot Fiakermilli
Director Albery moved his actors minimally, just enough to fulfill the musical and textural needs of the score. Every gesture was carefully measured to be an elegant surface motion that masked the musical compulsions underneath. It was smooth, indeed exquisite staging effected by a willing cast.
Like all Strauss female roles, Arabella too is vocally daunting. Most difficult are the moments of sublime beauty when the soprano floats an above the staff phrase over and beyond its apex, as had Strauss’ Marschallin. Then there are extended passages of longing, regret, reconciliation and finally ecstasy that sail through and above rich and soaring orchestral outpourings. Above all Strauss’ Arabella must be a beautiful woman who projects honesty and simplicity and compassion, and forgiveness for those who betray her. San Francisco Opera house soprano Ellie Dehn confronted the challenges of the role and largely succeeded, often rising to the monumentality imposed by the maestro.
Though Strauss loves most of all to exploit the female voice, in Arabella he challenges the endurance and the emotional spectrum of the baritone voice. Mandryka who has chosen Arabella to be his wife, made a bloodstained photo of Arabella his talisman for recovery after he was mauled by a bear. San Francisco Opera house baritone Brian Mulligan did not survive his first act explanation of all this, victim of the maestro who demanded a more experienced Strauss voice and more imposing presence to musically fulfill the Straussian ideal. Mr. Mulligan does possess a quite beautiful voice whose limits however were clearly exposed. 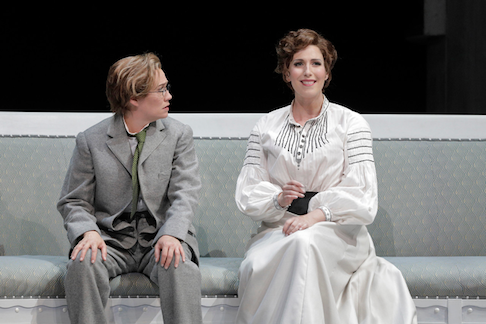 Heidi Stober as Zdenko, Ellie Dehn as Arabella
Von Hofmannstahl twisted the swain from pastoral poetry into a cross dressed soprano, here San Francisco Opera house soubrette Heidi Stober who gave a quite effective account of Zdenka who loves Arabella’s rejected suitor Matteo, however Zdenka is first known as the boy Zdenko who is Matteo’s best friend (you had to be there). Mme. Stober’s charming trouser role presence abetted by fine singing well matched the maestro’s need for a big house, tongue-in-cheek shepherd/ess. The Matteo of Swedish tenor Daniel Johansson held his own in the melee. Though missing the warm vocal colors to create the ideal Straussian swain he did project appealing musical energy.
Well cast as the Countess Waldner, mezzo soprano Michaela Martens made Arabella’s mother quite sympathetic in her enthusiastic support of the ruinous gambling addiction of her husband, Count Waldner sung by Richard Paul Fink.
The balance of the cast — three more suitors, plus the Fiakermilli — conformed to the in-house casting policy for this Arabella. The suitors were drawn from the Adlers (San Francisco Opera’s operatic finishing school) or equivalent. The Fiakermilli, usually a cameo role taken by an accomplished Ariadne Zerbinetta, was sung by former Merola participant Hye Jung Lee.