Many recent Godard recordings have been made possible with support from the Center for French Romantic Music, located at the Palazzetto Bru Zane (Venice).

What Godard’s several operas are like as a whole, though, has been hard to guess. The only number from any of them to survive through the years was a tenor aria, entitled Berceuse, from Jocelyn. That lovely lullaby has been recorded by an astonishing range of singers, including Bing Crosby (with, yes, Jascha Heifetz) , Plácido Domingo (with Itzhak Perlman), and my favorite: the Belgian tenor André d’Arkor, recorded in 1930 (and including, for once, the marvelous introduction and recitative).

Now a Godard opera, Dante—an imaginative tale about the poet Dante Alighieri (1265-1321) and his beloved, Beatrice—has been committed to disc, and in a first-rate performance . (Click here for a video containing some excerpts from the work.) I really had little idea what to expect. Yet what greeted my ears was one of the most confidently written and stylistically consistent operas I have recently encountered. The work’s basic manner might be compared to that of Gounod, but I was led to think at times also of Saint-Saëns’s Samson et Dalila and of some passages in middle Verdi. A few moments reminded me of Tchaikovsky (prelude to the final scene) and Musorgsky. But this only goes to show that Godard took solid models and that they worked well for him.

Samson (with its magnificent choruses of Hebrews and Philistines) occurs to me especially when I listen to Act 1, which consists in large part of big, oratorio-like choral tableaux, involving the struggle between the Guelphs and the Ghibellines in Renaissance Florence, and the question of whether Dante will be voted to become the city’s political leader. A direct influence of one opera on the other is perhaps unlikely, given that Saint-Saëns’s masterwork went unperformed in France until 1890, two months before the premiere of this opera. Still, Godard may have managed to see a score of Samson in the thirteen years since the its premiere in Weimar (1877).

Despite the heavy presence of chorus in Act 1, there are also extended, stirring solos (quasi-arias) for two of the main characters, Dante and Beatrice. Dante’s can be heard and seen on YouTube. The beginning of Act 2 brings a similarly gratifying solo scene for the third main character, Simeone Bardi. The latter is (as operatic tradition demanded) a baritone and stands in the way between the somewhat idealized lovers, who are of course a soprano and tenor.

(Bardi loves Beatrice and is already betrothed to her when the opera starts, thus setting up the major plot-conflict. The fourth major role is Gemma, a confidante of Beatrice who, for further complication, is in love with Dante.)

Picking up the plot where I left it: in the middle of Act 2, Dante and Beatrice get to have a passionate love duet . The act ends with an event that is historically accurate, namely the invasion of Florence by the French, who condemn Dante to exile. Bardi consigns Beatrice to a convent. Act 3 escapes history entirely. Here Dante wanders in the mountains, falls asleep, and has two dreams: first of Hell, then of Heaven. In short, Dante’s frustrated love is shown as inspiring the Inferno and Paradiso sections of his literary masterpiece, the Divine Comedy. (The genre of opera, with its love of excess in either the negative or positive direction, clearly left little room for a middle-of-the-road Purgatory dream.) 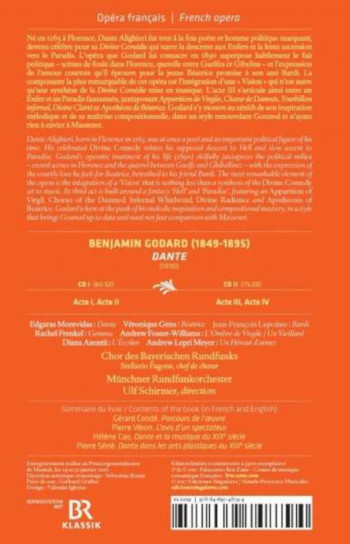 The two dream scenes contain much skillful and varied writing for orchestra and chorus, bringing the work, again, very close to oratorio. Indeed, the portrayal of Hell was so powerful (great opportunities for the brass!) that I feared that Heaven would be a disappointment, but I should have known better from a composer who wrote programmatic and “descriptive” symphonies (“Gothic,” “Oriental,” “Legendary,” and one based on the life of Renaissance poet Torquato Tasso), some of which incorporate solo and choral singing. The Heaven dream is of course colored by traditions of French religious music (well handled by Godard), but then links up with the main plot by allowing Dante to see an apparition of Beatrice, who—in eloquent musical phrases—expresses confidence in his ability to complete his epic.

In Act 4 (back in real life), Bardi, having agreed to give Beatrice up, leads Dante to her, but by this point she is sick and dying. She and Dante have a final love duet, which brings back material from the one in Act 2, and she repeats words that Dante had heard her voice uttering in the midst of the Heaven dream. Beatrice dies, and Dante commits himself to completing his literary work in her memory.

All of this would not perhaps amount to much if the music weren’t good. But it is better than good: clear in intent, melodically memorable, secure in harmony, and full of inventive accompanimental figures. Most gratifying are the short orchestral commentaries that punctuate the work: not just preludes before scenes but also statements in between phases in the action or between declarations by one character and responses by another. The opera repeatedly shows a deft ability to integrate the symphonic and the dramatic, in ways very different from the procedures advanced by Wagner. Godard is said to have wanted to have nothing to do with Wagnerianism. (He was of Jewish origin and utterly opposed to Wagner’s antisemitic polemics.)

The performance is splendid. The Palazzetto has here re-hired two of its most successful vocalists from previous volumes of their “French Opera” series. Gens is perfection itself as Beatrice. Montvidas (from Lithuania) makes a plangent Dante, secure in loud passages and especially touching in soft, doubt-filled ones. (Gens and Montvidas were superb as the central figures in Félicien David’s Herculanum, and Gens revealed a particularly wide range of emotions in Saint-Saens’s Proserpine.)

The big new discovery for me is the alto, Frenkel (from Israel), who commands the necessary low register for the role. Baritone Lapointe, as Bardi, lacks strength in his low notes. In his middle register, the vibrato can get a bit wide and slow. Lapointe is splendid, though, when things go high. Andrew Foster-Williams does a capable job as an Old Man and as the Ghost of Virgil (who guides Dante on the tour of Hell and Heaven). His voice is not ideally steady, but perhaps one excuses this somewhat because one of the characters is aged and the other is a vision rather than flesh and blood. Diane Axentii sings well in the role of “a schoolboy,” who offers a strophic ode to the greatness of Virgil in Act 3 (shortly before the spirit of the great writer arrives in order to guide Dante on a tour of Hell and Heaven).

The Munich orchestra and chorus under Schirmer respond with total assurance, as if they have known the work for years. The one weakness, I felt, was a certain start-and-stop quality in Act 4. I had just finished reviewing Berlioz’s Les Troyens and noticed how much more adroit Berlioz was at ensuring continuity from one section of a scene to the next (i.e., not requiring much adjustment on the part of the conductor). Perhaps Act 4 would flow more persuasively if the pauses between musical numbers could be kept shorter. I did not notice any such problem in Acts 1-3. This is the kind of problem that gradually get “fixed” (in both senses of the word: repaired and also standardized) as an opera finds its way into the repertory. For example, conductors make all kinds of unmarked but by-now-traditional tempo shifts in middle Verdi to help a work be fully effective. I noticed this while listening to a recent and relatively conventional live recording of Il trovatore from the Macerata Festival: back-and-forths between characters are often underscored by pointed adjustments in tempo (from conductor Daniel Oren) that suit each character’s current emotional state and that thus integrate the dramatic arc into the sung and played music.

The Palazzetto’s scholarly team prepared the score and parts and commissioned and edited the first-rate essays in the accompanying hardcover book.

Imagine what a stage director and designer could do with the Heaven and Hell visions of Act 3! Let’s just hope they don’t try to update or alter the onstage action in the rest of the opera. Perhaps they could even do something that today might be considered daring: set the opera in fourteenth-century Florence and try to evoke the afterlife, in Act 3, in ways that would have suited the era of Dante himself, or of the composer and librettist, rather than how we might imagine them today. (Late bulletin: a stage production is scheduled for February 2019 at the opera house in the French city of Saint-Etienne, about an hour from Lyons.)

Or perhaps the work is best suited to performance “in concert” (i.e., without sets or costumes). That way, each audience member can imagine a Hell and a Heaven that speaks to him or her.

The above review is a lightly revised version of one that first appeared in American Record Guide . It appears here by kind permission of ARG.

Ralph P. Locke is emeritus professor of musicology at the University of Rochester’s Eastman School of Music. Six of his articles have won the ASCAP-Deems Taylor Award for excellence in writing about music. His most recent two books are Musical Exoticism: Images and Reflections and Music and the Exotic from the Renaissance to Mozart (both Cambridge University Press). Both are now available in paperback, and the second is also available as an e-book. His reviews appear in various online magazines, including The Arts Fuse , NewYorkArts , and The Boston Musical Intelligencer .