These seven performances at the OpÈra de Lyon wrap up the run of the Warlikowski production of From the House of the Dead that started last spring at London’s Covent Garden and continued in the fall at the Brussel’s Monnaie. Veteran bass Willard White has remained the prisoner Goriantchikov, Warlikowski’s protagonist for the full run as has Czech tenor Stefan Margita (San Francisco Opera’s Loge) as the prisoner Luka. Both artists are veterans of the 2007 Patrice ChÈreau Aix Festival production also seen at the Metropolitan Opera in 2009.
Note that spellings of the Russian names have been Anglicized for this review.
It is ironic that black, “veteran” (the critical adjective for the past 20 years) bass White is both ChÈreau and Warlikowski’s choice for the only prisoner to be freed from the horrors of modern penal servitude. For ChÈreau it was a release from a physically detailed world of drudgery and degradation and suffering, for Warlikowski the prisoner’s release is a metaphorical death, the abandonment of a vibrant, intense, and principled world in which wounded human souls can truly soar. Warlikowski with conductor PÈrez find, finally, the essence of Janacek’s most forgiving line “a divine spark (a soul) shines in every being” and it was an emotionally and intellectually thrilling, in fact mesmerizing conclusion to this evening of unrelenting brutality.
Warlikowski inaugurates his From the House of the Dead with a video of the late French philosopher Michel Foucault musing about justice and the police. He speaks over Janacek’s introductory music, the intense pace of concept and the inflection of the French is exponentially enlivened by Janacek’s already boiling motives. Janacek then drives a commanding musical climax to which the video expands the monumental gates of a soaring castle — and it is a prison! 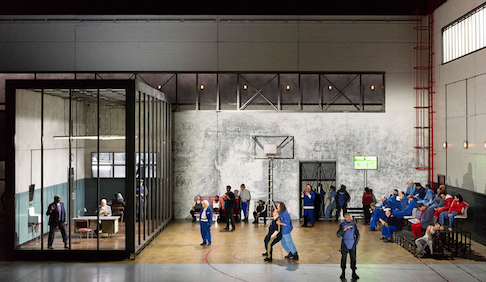 Willard White as Goryantchikov (far left), Nicky Spence as the Fat Prisonor with Ladislav Elgr as Shuratov (center)
A basketball court is revealed, a black player (a “pro” equivalent) dribbles and shoots a basket, among the prisoners who enter are four break-dancing acrobats (of the various skin tones that populate Western prisons) who project an unbridled spirit of freedom in their movement and in their energy, a canny take on the wildness of the Janacek score. A fight breaks out, the basketball player is wounded. We understand that the basketball player is Dostoevsky’s taunted eagle as we know that an eagle is a visual epithet of freedom.
The player will remain in a wheelchair until the final moments of the opera when he stands, shoots the ball and misses, then he takes it to the rack. Blackout. 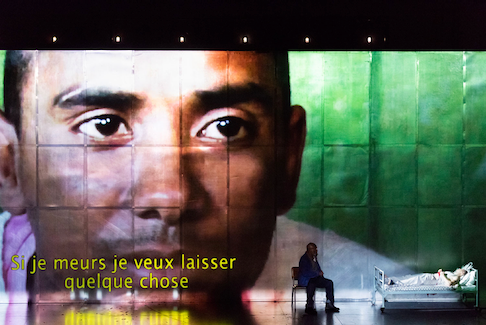 Unnamed South African gangster (video), Willard White as Goryantchikov, Pascal Charbonneau as the wounded Alyeya
Warlikowski separates the acts of the opera with a video from American film director Teboho Edkins’ Gangster Backstage in which a black South African gangster (a real gangster) muses during the musical silences about death, knowing that he wishes a legacy and that legacy might be, he imagines, saving a small boy from danger. We know now why the prisoner Goriantchikov (Willard White) will teach the young prisoner Alyeya to read and write, his legacy and gift to the spirited, truly human world that he must leave. And why he is the opera’s protagonist though he has very little to say or sing.
Warlikowski’s frenetic intellectual and physical world is deeply embedded into the continuum of Janacek’s sonic world, a world in which stories are told — Luka who stabbed the abusive commander of his prison, Skuratov who shot the rich man his mistress married, Shapkin who robbed a rich man and was tortured, and finally Shishkov who murdered his wife because she dishonored him.
Finally, more than the merely recounted violence, Shishkov elevates Janacek’s narrative opera to action — Shishkov resolutely murders Luka who he has learned is the man who had falsely denounced his new wife as unchaste. Janacek’s continuum hammers Shishkov’s revenge and his remorse, and the bravado and regret of the other raconteurs. Shishkov’s action is finally release. Violence and brutality redeemed. And Janacek drives the pathos ever deeper in the Old Prisoner’s epithet of the dead Luka, “he too had a mother.”
That Warlikowski’s plays (Kedril and Don Juan and The Lovely Miller’s Wife) within Janacek’s play added gratuitous grotesquery and violence to his prison world can be attributed to blind, probably necessary adherence to the dictums of “regietheater.” Unfortunately these attributes also became boring, detracting from the honest, effective intellectualism of the Warlikowski concept.
Lyon’s OpÈra Nouvel (named after it’s architect, Jean Nouvel) offers a very present, very bright acoustic. The OpÈra de Lyon’s fine orchestra was well rehearsed and poised to deliver. Conductor PÈrez, new to the production, was able to exploit (to the hilt) the quite detailed urgencies of the Janacek’s orchestral continuum, giving Warlikowski a musical force to well support the overwhelming physical and intellectual energy emanating from the stage.
From which there had been no escape. That final basket was deeply felt liberation.
Much of the sterling cast survives from the Covent Garden premiere, including the Luka of Stefan Margita and the Skuratov of Ladislav Elgr. Karoly Szemeredy was new to the production as a truly riveting Shishkov (he was Warlikowski’s Captain in last summer’s The Bassarids at Salzburg), as was the Shapkin of Dmitry Golovnin.
Michael Milenski

image=http://www.operatoday.com/Dead_Lyon4.png
product=yes
product_title=From the House of the Dead in Lyon
product_by=A review by Michael Milenski
product_id=Above: Karoly Szemeredy here as the bearded Orthodox pope (later he is Shishkov), Stefan Margita as Luka (far right in red) [All photos copyright Stofleth, courtesy of the OpÈra de Lyon]