Sir Thomas Beecham was probably over-egging it a little when he described CosÏ fan tutte as resembling “a long summer day spent in a
cloudless land by a southern sea”. Very little – actually none – of that
comes across in this production, but there is something to be said for the
lithe, effortless way in which the conductor, Stefano Montanari, keeps the
music moving. The delicacy of Mozart’s scoring, the beautiful – almost
tangy – woodwind phrasing were played like lyrical instrumental waves
rippling through the orchestra. This had the benefit of focusing attention
on Mozart’s glorious ensembles and arias which sounded fresh enough to leap
off the pages of the score – and there was no lack of soul-searching in
many of the solos. Beecham may have been right after all. 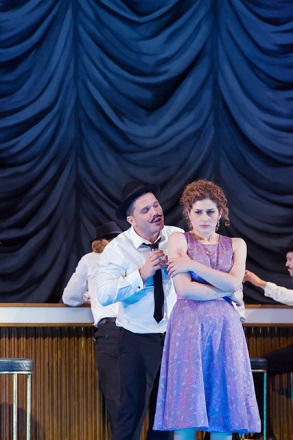 I’ve always rather sided with those – perhaps an unfashionable view to hold
these days – who find the libretto and plot of CosÏ slightly weak
and rather concocted. Given the length of the opera, Mozart – rather
uncharacteristically – doesn’t develop the motives of fidelity and honour
completely satisfactorily. But that is not to say there aren’t complex
attitudes towards femininity and love because there are. Gloger’s
production does little to enlighten us, however. There is perhaps some
truth in the view that Mozart was a largely theatrical composer when he
came to writing his operas so Gloger’s idea of setting the whole work in
Alfonso’s ‘theatre’ seems a logical extension of this. But that
overwhelming ambition Gloger has to be theatrical glosses over what is so
disturbing about this opera. Often, I thought I was sitting through scenes
from a Comedy of Errors or a Midsummer Night’s Dream.
Gloger’s production is so literally theatrical it forgets that CosÏ is a heavily ambivalent opera, almost a little unnerving in
its treatment of women. It’s such a comic tour de force (and this
production is very funny, the play between Orendt’s Guglielmo and Fanale’s
Ferrando almost recalling Laurel and Hardy at times) that self-knowledge is
either taken for granted or simply elided over altogether.

For Gloger, Don Alfonso’s theatre is viewed entirely as an experiment, a
laboratory in which to match-make and explore the complexities of love and
fidelity. Arguably, his reasoning has as much to do with the psychology of
the process as it does with the emotional circumstances of it but it’s the
very concept of the multiple scene changes which makes the whole production
such a chaotic – and often crowded – flop. It begins off stage from one of
the opera boxes which, depending on your point of view, either draws the
audience in, or does the opposite; likewise, a tendency to place the
scenery to the forefront pushes the singers too far forward for no
demonstrable purpose other than to make the production seem small in scale.
Proscenium arches give height, but they’re often so bleak – a simple black
brick wall, for example – that the singers seem to be squeezed into the
centre of them as if you’re watching them on a television screen. A railway
station with a vast clock is almost occluded in smoke; a brightly lit
steel-framed cocktail bar (rather better done by Bieito, I seem to
remember), a semi-wilting tree with an unconvincing serpent wrapped around
it didn’t really convince me. Muscled stage hands, with tattoos, or
cigarettes between their lips, shifting scenery or drawing up backdrops
merely add to the clutter.

Where the production has a strength is that it advances the contemporaneous
nature of relationships from its original setting. The idea that a modern
day CosÏ might demonstrate that couplings can be torn apart by
infidelity and betrayal isn’t revolutionary but Gloger stops short of being
truly shocking as Bieito (in his Don Giovanni) didn’t. Gloger’s
Guglielmo ends up becoming a slightly tragic figure for whom love is an
empty vacuum; Ferrando comes closest to the ideal of faithfulness but only
because he recognizes he is in danger of abandoning it altogether.
Dorabella doesn’t seem to know what she wants. Fiordiligi becomes the most
deceitful and confused of all. Alfonso’s experiment might be seen as the
masterful duplicity and manipulation that it is – just as Despina’s
disguises are masks of elaborate confusion. All of these aspects of love
collide and entangle in this production even if you don’t necessarily grasp
it by the end. 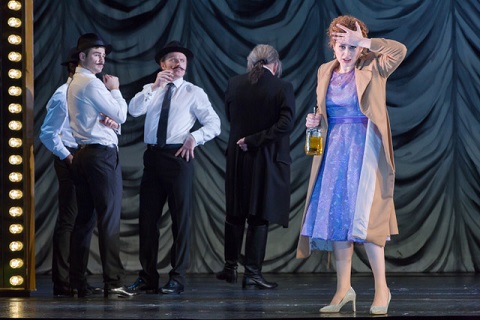 In a way, it’s quite surprising given how I generally didn’t warm to the
production how riveting I found much of singing. Much of this was
beautifully sung – and exquisitely – if perhaps – a little over-acted. CosÏ fan tutte undeniably contains some of Mozart’s most ravishing
music and the casting here was nigh ideal in balancing the voice colours.
There was some unanimity in the bass-baritone of Gyula Orendt’s Guglielmo
and the tenor Paolo Fanale’s Ferrando – the parallels of warmth and
contrast to the voices were like the equivalent of a harmonious echo.
Salome Jicia’s Fiordiligi was gloriously pitched, Serena Malfi’s Dorabella
a little more understated – but rich enough and fully convincing. Thomas
Allen’s voice has waned a little – but no one sings the role of Alfonso
with more irony, or sheer joy – and today there are just hints of tragic
overtones to it. Serena Gamberoni’s Despina was a glorious portrait in wit
and soubrette and deliciously funny.

That richness in Serena Malfi’s voice was magnificent in ‘Smanie
implacabili’ – taken with a beautiful soaring line and an almost tragic
intensity. Stefano Montanari tended to drive the music fast – especially in
Act I – so if Malfi were intent on bringing some added depth to her singing
it wasn’t always apparent. The prominence that Montanari gave to the
woodwind, however, was often a sublime foil against the warmer richness of
Malfi’s voice – even at these brisk tempos. Oddly, he seemed to slow down
for Ferrando’s ‘Un’aura amarosa’ which was perhaps the highlight of Act I.
The sheer beauty, the beguiling tonal colour, the careful phrasing and the
ability to hold the most exquisitely shaped pianissimo were simply
jaw-dropping. It’s the only time throughout the opera you felt a singer was
entirely drawing the audience into this rather self-destructive world – a
quite magical moment. If there was a wonderful serenity to much of Fanale’s
singing – and he never really felt constrained by the intensely lyrical
size of his tenor voice – Orendt’s Guglielmo rather revelled in the vast
comic scale of his arias. It’s not just that the voice is so large, but
it’s that it also has such a developed and innate sense of character. The
voice can sound mocking one moment – almost like a foil to Thomas Allen’s
Don Alfonso – but the next it seems to imitate the orchestra – how some of
Orendt’s notes rang out against some of the brass fanfares, as if in a
comic duet, was thrilling. Salome Jicia was colossal in her ‘Fra gli
amplessi pochi astanti’ – thrilling in her high notes and riding over the
orchestra, somehow seeking to assert her dominance over both the men as her
prospective lovers.

Stefano Montanari – making his house debut – managed to get the Royal Opera
House orchestra to play with a lightness of touch which was admirable. The
opening to Act II can – in the wrong hands – sound like a Bruckner adagio
and Montanari came close to making it do so. But at his best, which was
much of the time, this was a performance of the score that was fleet and,
shrewdly, highlighted individual instruments within the orchestra. There
was a period feel to all this – without it overtly being one.

Covent Garden’s CosÏ fan tutte is one that is predominantly
rescued by the singing and conducting; it would, largely, sink without a
trace if that weren’t the case.