Austrian composer Olga Neuwirth’s muse is injustice fuelled by discrimination and the abuse of power, themes that she welcomes in this retake on Herman Melville’s Moby Dick. The more sensational content of “the great American novel” is extracted and elaborated to make a sort of dramatic action supported by a musical score of great interest and indeed considerable appeal.
With the proliferation of our current “news and commentary” hungry culture Mme. Neuwirth’s expositions of contemporary evils are already the evils we well know. Thus at first glance the dramatic action of The Outcast is redundant elaboration of current sensibilities, overworked, everyday material that has lost edge through constant exposure. Our interest in Mme. Neuwirth’s installation is therefore focused on how she manipulates Melville and his great work.
To appreciate and to feel her music to its probable depths we needed to understand the text it embodies. I am not the first critic to say that an appreciation of The Outcast depends on an advance examination and consideration of its libretto. Without such warning we were left with only an approximate idea of its glories. Mme. Neuwirth’s The Outcast verges on hermeticism (art with difficulties that exclude a larger public). 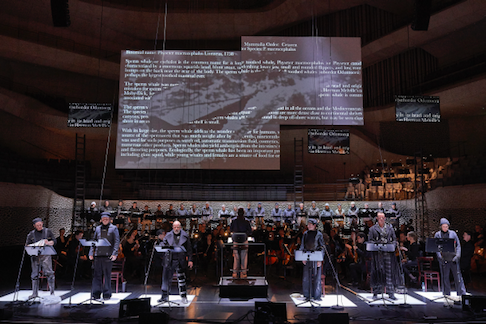 Left to right: Starbuck, Stubb, Ahab, Pip, Queequeg, Ishmaela. Photo copyright Claudia Hˆhne
Essentially the ship Pequod and its captain Ahab plunder the sea [reeking profits from their exploitation of the world’s resources], the Pequod’s crew at first idealistic whalers then give themselves to Ahab’s purposes [democracies that succumb to a strong, destructive leader]. Meanwhile in the libretto Ismael become Ismaela [self realization] among other strident themes. Neuwirth adds a spoken text (by Boston based Austrian author Anna Mitgutsch) for an “old” Melville. This text, read by an actor, questions power and helplessness, God, the act of writing, fate, cruelty and the beauty of nature.
Olga Neuwirth’s musical palette in The Outcast is a full symphony orchestra (double winds), plus a synthesizer, accordion and an electric guitar. There is no such thing as harmony (vertical structures of accord or discord), there are no scales (successive tones of internal attractions that have repetitive structure), and there is never any discernible beat or repetitive rhythm. Thus Mme. Neuwirth creates successive masses of symphonic sounds that are thrusts and plaines of complex colors (infinite shades) enhanced by amplification.
Vocal lines while linear and text friendly are not melodic. They certainly are not easy to sing. The concert format of the installation allows the presence of scores — a necessity given the arbitrary linear movement.
In her Outcast storytelling Mme. Neuwirth does use a sort of “concrete” music — the guitar for a folksong episode, the synthesizer fabricates a pipe organ for a New England church, the accordion a ship song, the traditional, recognizable (or maybe what we call real) musical structures soon dissolve into Mme. Neuwirth’s symphonic messes.
The Neuwirth musical poetic is fully developed and extremely effective. May it achieve its potential in her upcoming commission for the Vienna Staatsoper (this coming fall), an opera based on Virginia Woolf’s Orlando. Perhaps she will have the help of a dramaturg.
British designer/video artist Netia Jones created this installation. There were five screens of various sizes with sometimes bits of projected English language text that you were not meant to read, rather to accept as Moby Dick the book, other times there were still images of the open sea, and sometimes there were static, abstract vertical lines. The total look of the production was nothing less than spectacular, the eight costumed soloists (seven singers, one actor) in a line across the front of the orchestra platform, the male chorus single lined across the back behind the orchestra, the screens suspended above the chorus loft and the boys chorus eerily placed up there as well, and spookily lighted.
The cast was quite able and did indeed bring Mme. Neuwirth’s The Outcast to vibrant life. The star of the show was the Munich Boys Chorus (M¸ncher Knabenchor) who stood without the slightest movement for the one and one half hour duration, singing the very difficult music that expressed the innocence of young boys who became sailors.
Israeli conductor Ilan Volkov, held all this together with no evidence of stress, adding to the overall impression of a beautifully produced evening. 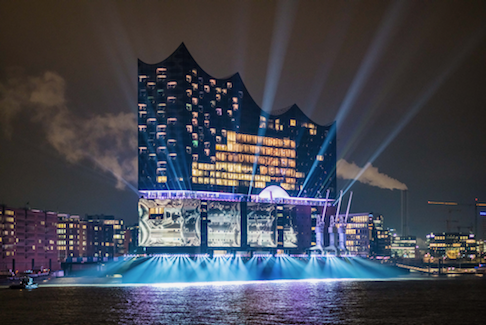 Lighted area are the public areas of the Elbphilharmonie. Photo copyright Ralph Larmann
Hamburg is the epitome of a rich city. Rich enough to have a recent new opera house and rich enough to build this magnificent new concert hall designed by the star Swiss architecture firm Herzog & de Meuron. The structure, built over an old waterfront warehouse is a veritable Mount Parnussus of music — once inside the theater itself (it starts on the eighth elevator level of the building) you climb and climb through pure whiteness to the level (there are five) of your seats, spectacular, black-night city views are revealed from time to time. Note that the building holds also a hotel and 45 apartments.
The acoustical engineer was the famed Yasuhisa Toyota, responsible for the excellent acoustic of Los Angeles’ Disney Hall as well as other recent theaters throughout the world. Given the amplification of The Outcast forces it was not possible for me to assess the hall’s real sound.
That The Outcast is outrage directed at the capitalistic forces that could finance this $1,000,000,000 structure was the glaring irony that defined the evening.
Michael Milenski