When I last saw Dominic Cooke’s

2005 WNO production of The Magic Flute, in 2015, it was part of a spring tour entitled Spellbound. Now,
revived by Caroline Chaney, it’s back under the umbrella of ‘Monarchy’ –
and it’s a very Magrittian umbrella, decorated with a dash of DalÌ.

Julian Crouch’s box-like set comprises three cloud-strewn walls each
punctuated by three tall wooden doors. The rear wall – on the doors of
which an eerie hand hangs three placards: Nature, Wisdom, Reason – lifts to
provide depth and to sharpen the perspective. It’s visually enchanting but
on this occasion, I found the design quite confining. 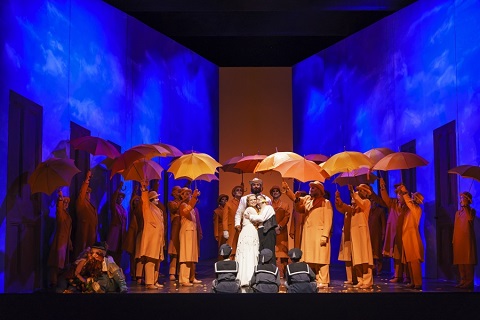 The Queen of the Night struggles to compel us from the darkness of the rear
from which, swathed in smoke, she sings ‘O zittre nicht’. The Three Boys
(who in this instance include one girl, Ruby Llewelyn) make their first
appearance through the doors stage-left, though two of the sailor-suited
lads didn’t quite come fully onto the set, remaining half-obscured by the
half-opened doors; and, later, when they sailed on floating
penny-farthings, the Boys cycled vigorously but went nowhere fast.
Sarastro’s band of brothers rise up through trapdoors from nether regions,
but only as far as their necks, and the effect was – at least for those
seated quite close to the Hippodrome stage – a sea of disembodied singing
bowler hats waggling orange umbrellas to signal their accord with
Sarastro’s proposal that Tamino should join their brotherhood. There is a
lot door-opening and -closing, and entering and exiting, but the overall
impression was a general lack of movement. There was little sense
of travels or trials; even the ferocious animals are lulled to stillness,
rather than enchanted dancing, by Tamino’s magical flute. 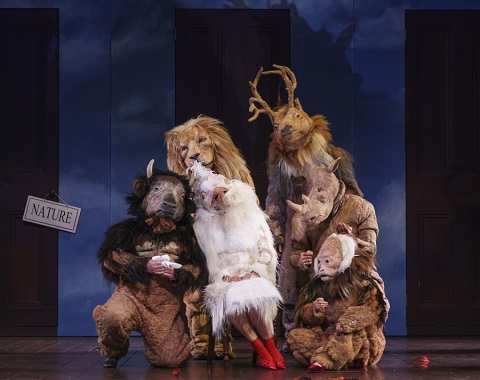 This puts a lot of responsibility on the cast and chorus, and
instrumentalists, to create animation and convey the characters’ emotional
journeys. Fortunately, WNO have gathered together some fine singers,
several of whom are reprising their roles from previous runs. Mark Stone
was a relaxed and worldly Papageno. His diction was unfailingly clear, his
projection easy and there was a cheeky but beguiling touch of softly
serenading sentimentality to his baritone. Stone’s humour was delivered
with a mild urbanity which was slightly at odds with Papageno’s ruffled
appearance. But, it was impossible not to warm to this genial and honest
bird-catcher. Who would not delight when he netted himself his longed-for
mate – a female ‘entirely like him’ (mir ganz gleich)? And as Stone and his
Papagena (a bright and chirpy Claire Hampton) excitedly gathered up their
rapidly multiplying progeny that were thrust through the trap-doors, who
would not smile, perhaps a little wryly, at such a ‘happy ending’? 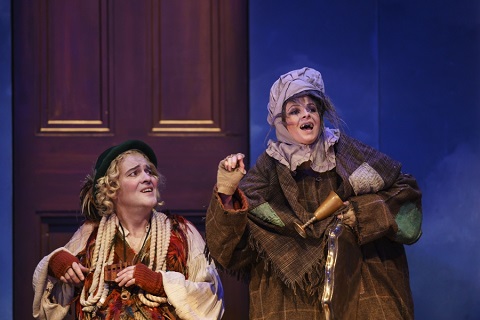 It’s hard, too, to imagine a more ideal Pamina than Anita Watson. Her rich,
silky soprano wrapped itself lovingly around Mozart’s delicious melodies,
and Watson’s well-shaped phrasing created strong character and spirit.
‘Ach, ich f¸hl’s’ managed to be heart-wrenching without Watson lingering
overly long on the aching phrases, and she and Stone blended well in ‘Bei
M‰nnern welche Liebe f¸hlen’. Ben Johnson took a little longer to make his
mark as Tamino, but his vocal characterisation grew in strength and
Johnson’s pleasing tone captured the freshness of youth and newly
discovered love. 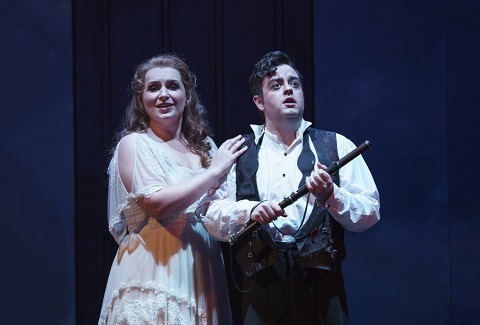 Anna Siminska reliably punched out the top notes – sparkling like the stars
that we don’t actually see in this production – in ‘Der Hˆlle Rache kocht
in meinem Herzen’, but I found her tone a little cold and her phrasing
inflexible in the lower regions of her voice. Her Three Ladies were
spirited: flirtatious and competitive rivals in displaying their ‘care and
compassion’ for Tamino. along with a flash of suspender belt under their
lady’s-maid aprons. Emma Carrington once again impressed as the Third Lady
and she was very competently joined by Jennifer Davis and Kezia Bienek,
vivacious First and Second Ladies respectively.

Jihoon Kim, replacing James Platt here in Birmingham, doesn’t really have
the full lower notes to excel as Sarastro, and his effort to reach them
sometimes resulted in a slight fuzziness, but Kim did his best to convey
Sarastro’s gravity and compassion, even if the authority of his spoken text
was marred by some distorted vowels. Howard Kirk’s Monostatos was no
cartoon buffoon, and all the better delineated for the relative
understatement; Kirk sang his aria cleanly and persuasively. I was
impressed by Philip Rhodes’ Speaker, and Joe Roche and Laurence Cole put in
fine performances as the First and Second Armed Man.

The Chorus sang with vigour and warmth, and conductor Thomas Blunt
(standing in for Damion Iorio for these Birmingham performances) drew crisp
playing from the WNO Orchestra.

I hope that Opera Today readers will indulge a digression to conclude, for Cooke’s
visual surrealism got me thinking. The moral ambiguities of The Magic Flute – the implied racism and, even stated, misogyny –
can be hard to reconcile today. Similarly, the opera’s apparent
Enlightenment discourse sits oddly alongside its disturbing currents of
irrationality. Such discrepancies have given scholars plentiful food for
thought and speculation: Mozart’s opera has been explored from the
perspective of 18th-century Freemasonry, and through the lens of
Freud and Jung. Interpreting its esoteric symbolism in an article
entitled ‘Layers of Meaning in The Magic Flute’, Joscelyn Godwin (Musical Quarterly 1999) proposed that we should see
Pamina as Tamino’s anima – the feminine side of his spiritual nature – and
Monostatos as Sarastro’s shadow, the dark side of his apparent benevolence. 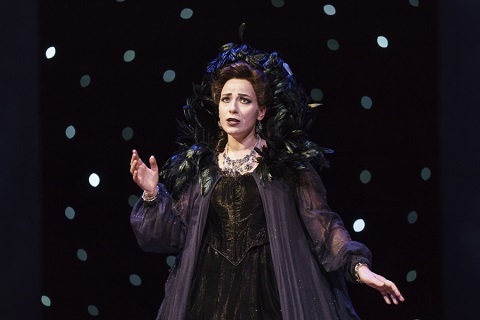 The principle of patriarchy has certainly proved one of the opera’s more
problematic elements, leading Catherine ClÈment to argue, ‘If there is an
opera that clearly shows, with all its verbal and musical power, the
crushing symbolics of men over women, it is The Magic Flute.’
Citing the initiation of Pamina, others have rejected such accusations of
anti-feminism.

So, what does this WNO production have to say in this regard, and might
Cooke’s surrealism prove instructive? David Pountney suggests, in his
programme note, that Mozart and Schikaneder’s Singspiel looks
forward to a time when ‘man and woman, as represented by Tamino and Pamina,
will rule together as equals’, seeming to agree with the late Rodney
Milnes’ view that, ‘The synthesis of all the warring elements will herald a
new, golden age of peace and wisdom’. Perhaps. But #MeToo suggests that
such a future is still a utopian dream – as Pountney himself allows, ‘After
over 200 years, we are still waiting for this future’.

Perhaps one day, a director will be brave enough to place the Queen of the
Night on the side of moral righteousness and to make Sarastro the ‘bad
guy’. Ingmar Bergman, in his film of the opera, made some gestures in this
direction, as his unpublished film script (discussed by Rose Laub Coser in
‘The Principle of Patriarchy: The Making of The Magic Flute, inSigns, Winter 1978), reveals: ‘There is a disdain for women in The Magic Flute which is difficult to cope with’ and to get around
this ‘we have changed the text a bit …’.

One can’t get away from the fact that whereas the male sphere in the opera
is associated with clarity, truth and reason, and Sarastro’s music is
composed and balanced, the female domain is characterised by darkness,
deception and disorder. The threat of feminine irrationality is perfectly
embodied by the Queen of the Night’s opera seria excess and
contortions. But, perhaps the surrealism that Cooke employs as engaging
visual decoration, could be used to probe deeper and more critically: to
undermine connections between words, image and reality, and to subvert
Sarastro’s professed ‘reason’ and ‘wisdom’. After all, Tamino and Pamina
inhabit a frightening half-reality – dream or nightmare? – journeying
through a Jungian wonderland of the subconscious and unconscious. And, like
a fairy tale The Magic Flute plunders archetypal symbolism which
is ripe for surrealist re-invention. 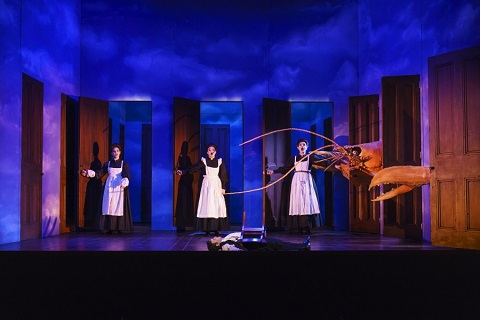 Umbrellas, bowler hats and umbrellas, depicted in a plain and conventional
surface style, may intimate darker depths of the psyche. As Magritte
explained, the bowler hat was the generic symbol of the bourgeois man, ‘The
bowler…poses no surprise … It is a headdress that is not original. The man
with the bowler is just middle-class man in his anonymity.’ But, surrealism
makes the familiar strange. We think we know who the man in the bowler hat
is, but do we really? The WNO programme reproduces Matisse’s Le Faux Miroir, which intimates wonder and fear: the eye both sees
and reflects the world calling into question identity and the limitations
of human vision. Moreover, in ‘Salvador DalÌ’s Lobsters: Feast, Phobia, and
Freudian Slip’ Nancy Frazier discusses DalÌ’s use of lobsters as a symbol
of danger and castration. In 1939, one of the exhibits in DalÌ and George
Platt Lynes’ photographic collaboration during the New York World’s Fair
was entitled The Dream of Venus. One photograph depicted a nude
female body across whose pelvic area was placed a lobster, the claws of
which can lacerate other objects which, Frazier suggests, lends itself to
become the perfect surrealistic symbol for castration. Moreover, the
lobster only becomes vibrant orange-red when it is dead and powerless. Such
reflections add a whole new dimension to Cooke’s rampaging crustaceans.