The Altes Hoftheater, designed by Danish architect Gottfried Semper, had opened in 1841 but burned to the ground in 1869. It was rebuilt by Semper and his son only to be bombed in 1945. Painstakingly restored by the then East Germans it again opened in 1985. Somewhere along the line it became the Semperoper — as well as an homage to its architect the name has become a clever play on words.
The 1300 seat Italian style theater offers rare insight into what might have been the long ago sounds of these first two operas of Bayreuth’s “Wagner canon.” The Semperoper has a very present pit, and not a very large pit.
The colors of the winds that emerged from the Tannh‰user pit were quite pure and very distinct, volumes and intensities of sound were measurably calibrated resulting in specific musical atmospheres for Wagner’s leitmotifs. The strings found bite when needed, and most of all emitted a truly stringy tone that molded a sharply etched harmony. Brass was brilliant, tympani were thunderous, and, cherry atop the cake, the Tannh‰user pit harp sounded loudly, as if it were just by the Wartburg minnesingers on stage. The Semperoper sound is distinctly not the Bayreuth sound. 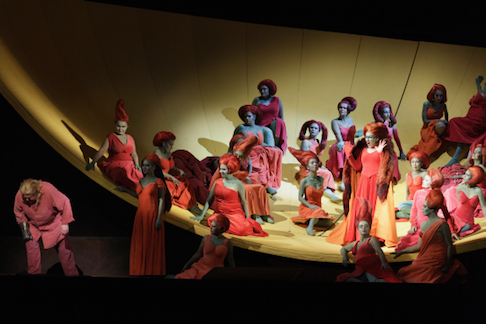 Stephan Gould as Hermann (far left), Ekaterina Gubanova (standing) as Venus
The Dresden Stadtskapell principal conductor, Israeli born, thirty-seven year old Omer Meir Wellber was in the pit for this seventy-first performance of the 1997 production by the famed German director Peter Konwitschny who was fifty-two years old at its premiere. The nineteenth century painting that was the show curtain disappeared during Mo. Wellber’s splendid account of Wagner’s famous overture to reveal a huge stage wide, tilted golden bowl into which a bevy of mythological Bacchantes joyously slid. We knew we were in for a good time.
When once again we were among the mortals of Wartburg director Konwitschny replaced the bowl with a huge, stage wide, acutely curved crescent shaped platform wittily reminding us that there were some slippery slopes ahead (Tannh‰user’s salvation). It can be mentioned that the high step up onto this soaring platform and ascending its slopes was challenging for some of the performers.
Of extraordinary pleasure were the male choruses, the theater’s immediate acoustic supporting the clarity of its uniquely beautiful tone, this acoustic as well permitting the voices of the protagonists to project clearly through even the most intense orchestral fortes. Though the actual words of Wagner’s poem were very present in our ears, and supertitles may have been superfluous, the Semperoper provides supertitles in German and in English (there are no supertitles at Bayreuth). 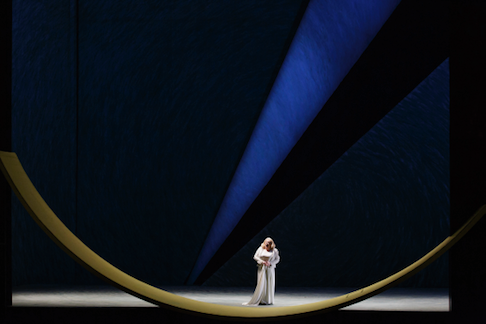 Ricarda Merbeth as Elisabeth
If the initial vocal and physical movements of American Heldon tenor Stephen Gould were clumsy, by the third act when we had arrived at his extended narration of his pilgrimage to Rome he redeemed himself, if unfortunately not spiritually certainly artistically, and we were genuinely moved by his torment and later by his death. German soprano Dorothea Rˆschmann delivered a solidly sung Elizabeth throughout, though she did not plumb the emotional depths of Wagner’s sublime prayer to the Virgin Mary. American baritone Christoph Pohl sang Wolfram in requisite beautiful voice and depth of feeling as Elizabeth’s rejected suitor.
?
Stage director Konwitschny pursuing his Berliner Ensemble roots made his few scenic elements into abstracted symbols of Wagnerian philosophical aspirations. Of special prominence were the outsized swords wielded first by Tannh‰user and the Baccantes, then by the knights of Wartburg and finally by Elisabeth as she crouched before Wolfram while he delivered his exquisitely sung hymn to the evening star. The sword became the Calvary cross†born by Jesus in his sacrifice to save sinners, now borne by Elisabeth to save Tannh‰user’s soul — this a quite striking image.
The musical edition for this production seems to be a combination of Wagner’s 1860 Dresden version, his 1861 Paris version and his 1875 Vienna version. Though there was no Act I ballet, Venus did appear at the end of the opera tempting Tannhauser to return to her. And in this Konwitschny staging the rejected Venus does not disappear, but overcome, she caresses the dead Elisabeth while Tannh‰user whispers his final plea for salvation to Elisabeth, the offstage chorus of pilgrims extolling the infinite mercy of God.
Venus was sung by Russian mezzo Ekaterina Gubanova, a role that is perhaps wasted on this gifted artist of wide emotional range (cfr. her Paris Eboli). The Konwitschny production works in bold conceptual strokes, any subtleties in Mme. Gubanova’s discrete performance were invisible and superfluous.
If the Tannh‰user pit revelled in the acoustical glories of the Semperoper, the Holl‰nder pit underscored the stylistic limbo of this first mature Wagnerian music drama. American conductor John Fiore favored a bright, Italianate sound, making no effort to explore the darker atmospheres that can make Wagner’s Dutchman a magical experience. 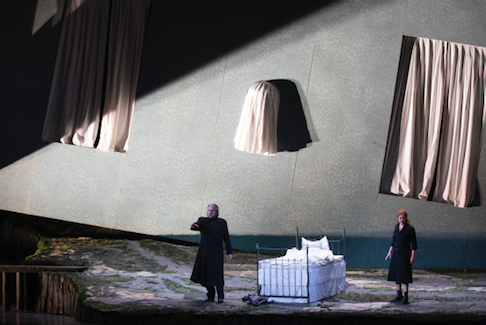 Act II: Senta’s bedroom
This was the thirtieth performance of this 2013 production by German opera and theater director Florentine Klepper. Most striking was the doubling of Senta with a pre-adolescent girl who rescued a wounded vulture during the overture and caressed it during much of the first act. She is also cruelly ensnared in fishing net by raucous sailors in the joyous music the closes the first act.
The spinning chorus of the second act brings thirty or so, identically dressed, pregnant women onto the stage who proceed to give live births on the stage (my third experience with scenic live births this year), Senta’s friend Mary is the midwife. The third act opens as a sort of marriage festival, with Senta’s father Daland lying Freudianly dead on a bed downstage left. 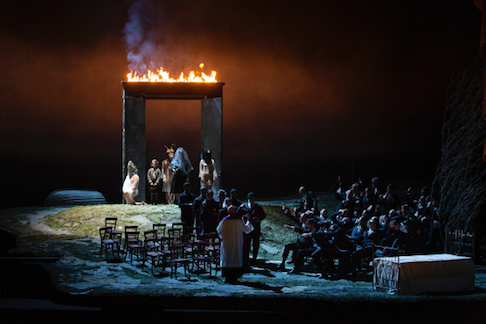 Act III marriage
Said and done, the Dutchman exits stage left to board his ship, sacrificed forever to the sea, video projected vultures obsessively circling. Senta puts on a coat, picks up a suitcase and exits stage right.
As you can imagine we were on the edge of our seats struggling to make all this somehow make sense, and of course we heard Wagner’s music as never before. The Semperoper fielded a plausible cast and Mme. Klepper was vindicated. If not the masculine redemption Wagner intended, it was still high music drama indeed, Mme. Klepper making the case that the Wagner muse had set its sights well beyond the mid-nineteenth century to the moment when the feminine spirit was as redeemable as the masculine.
Senta was convincingly sung by German soprano Ricarda Merbeth, a role she performed last summer at Bayreuth. Korean born, Italian finished baritone Antonio Yang was the rich, youthfully voiced Holl‰nder who projected a threateningly confident and finally a sympathetically complex character. Senta’s first love, Erik was sung by Croatian tenor Tomislav Muûek, also an alumnus of last summer’s Bayreuth Dutchman. Bass Georg Zeppenfeld of the original 2013 cast again sang Daland, Simeon Esper also from the 2013 cast sang the Steersman.
Michael Milenski