. Here, though, Pountney seems less interested in his monarch’s regal
responsibilities than in his thespian inclinations with the result that
both the love triangle which spawns vengeful jealousy and the political
conspiracy with which the former becomes entwined, with tragic
consequences, are overshadowed by theatrical conceits, with Riccardo more
stage director than sovereign potentate. In Un ballo Verdi
balances private intimacy with public spectacle, but Pountney, Bauer and
Lecca give us not so much grandeur as gothic Grand Guignol grotesquery.

I should start, though, by saying that musical values and achievements are
very high indeed in this production, and that however diverting (and,
admittedly, at times entertaining) the games and japes in which Pountney
indulges, the director makes space for Verdi’s beautiful score to breathe.
Carlo Rizzi presides in the pit and masterfully overseas a performance
characterised by strongly defined and delineated musical moods and strokes.
A whispered pianissimo at the start of the overture immediately
established a conspiratorial air, and the tautness of the gruff fugato
which conjures the schemers’ intriguing tightened the screw further.
Spine-twitching gun-shot chords initiated Act 1 Scene 2, but such
hyperbolic gestures were complemented by melodic shaping of touching
beauty; the aching cello obbligato which accompanies Amelia’s melancholy
aria ‘MorrÚ, ma prima in grazia’ in Act 3 typified the prevailing
expressive eloquence, and was matched by the cor anglais’ haunting
commentary during Amelia’s grand scena in Act 2. This was some of
the best orchestral playing – stirring colours, pinpoint details, confident
ensemble and spot-on tuning – that I have heard from the WNO Orchestra. 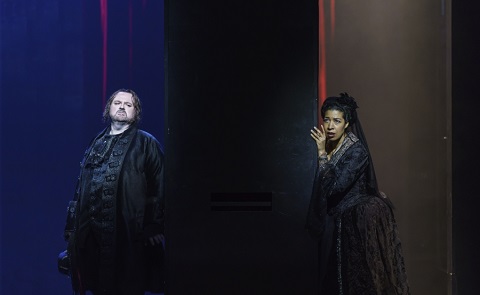 
and tenor Gwyn Hughes Jones and soprano Mary Elizabeth Williams once again
exhibit power, stamina and subtlety as Riccardo and Amelia. Though there
was some occasional roughness as his voice swelled in its lower regions in
Act 1, Hughes Jones relished the more expansive moments of heroic lyricism.
He really acted with his voice during the scene at Ulrica’s ‘urban coven’,
and ‘Di’ tu se fedele’ sparkled with insouciant recklessness. Hughes Jones’
Italian diction was consistently excellent, and he captured all of the
monarch’s presumption, paranoia and impetuousness, though Pountney’s
conception deprived the King of true nobility.

This Amelia is a little one-dimensional – not really Williams’ fault as she
too is rather pushed to the hinterland by Pountney’s conception – but she
can float a phrase glorious and use the gentle edge of her soprano to
garner our sympathy and convey emotional realism. Ronald Wood was returning
to a role in which he so impressed at

last summer, and if Wood seemed a little less central to the dramatic
thrust of the opera this time round, when able to let Renato’s vengeful
energies off the leash in Act 3’s ‘Eri tu che macchiavi quell’anima’, Wood
was compelling. 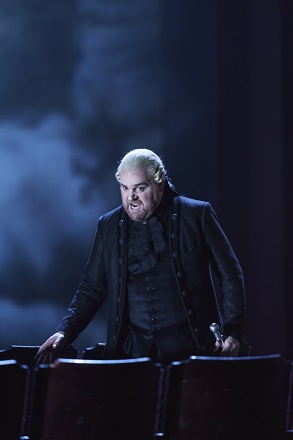 Despite such musical luxuries, at times I found Pountney’s concept – or
multitude of concepts – somewhat taxing. First, the location. After the
Revolutions of 1848, the crowned personages of Europe were understandably
twitchy about ensuring that their own heads stayed attached to their
shoulders, and when Verdi and his librettist Antonio Somma presented the
subject of Gustav III of Sweden’s assassination as the subject for the
composer’s next opera the censors were rattled, forcing the duo to relocate
the action to colonial Boston. And that’s ‘where’ the opera premiered when
seen for the first time in Rome in 1859; it took another seventy-six years
for it to find its way home to its Swedish origins, in a production staged
in Copenhagen.

Pountney plumps for a Swedish setting – though he retains the characters’
Italian names: why not go the whole hog? – at the time of the assassination
of Gustav III, a man he describes as “enthralled by theatre and disguise”.
Indeed, this ‘enlightened despot’ who ruled from 1771 to 1792 – when, at a
masquerade ball, he was surrounded by five black-cloaked assassins, one of
whom cried, “Bon soir, beau masque”, before shooting the King in the back –
was a devotee of the arts, and especially the theatre. He established the
Music Academy in 1771, the Academy of Painting and Sculptury in 1773, the
Academy of Belles Lettres, History and Antiquities in 1786 and the Swedish
Academy that same year. A writer of plays himself, Gustave found The Royal
Great Theatre/The Royal Opera in 1782.

So, Pountney makes his Gustav a sort of Prospero, directing his own life
story – not exactly from the wings, but rather from centre-stage.
Throughout, ‘Riccardo’ consults a little leather-bound red book –
presumably directorial notes – and the ‘walls’ which form the set are
revolved by pronouncedly visible stage-hands. Rows of theatre seats, not
unlike those we are nestled in, are placed far stage-right so that the
characters can spectate unfolding events. When we reach the gallows scene,
these walls are robed in velvet red curtains.

Indeed, our first ‘sighting’ of Riccardo is not seated on his throne, but
‘hiding’ in a black sarcophagus, with a leather-suited Oscar prone in
mourning across the state coffin. We might be in Gustav Adolfs Torg Square
which houses the Opera House and Jacobs church; or, we might be beside an
Italian tomb. The shadow of death is cast across proceedings and there’s no
doubting Riccardo’s fate: but, actually, its all a jolly jape – the lid of
the ebony casket opens and out climbs Riccardo, alive and kicking, to the
playful Oscar’s joy! Sung at this performance by Harriet Eyley (replacing
Julie Martin du Theil), this Oscar is Ariel to Riccardo’s Prospero,
relishing his master’s machinations and whipping off the wig of the Judge
(Gareth Dafydd Morris) who wants to banish Ulrica before racing up to the
uppermost window above the square, poking his head through the curtain, and
defending the fortune-teller while derisively waggling a grinning,
carnivalesque head on a stick. Perhaps Pountney is invoking Mikhail
Bakhtin’s theory of carnival, and the relationship between laughter, sex
and death? And, perhaps this isn’t so far-fetched given the opera’s
premiere during the Carnival season in Rome, the custom of crowning and
then uncrowning a Carnival King, the opera’s tropes of masking and
disguise, and the fact that Oscar is a travesti role? 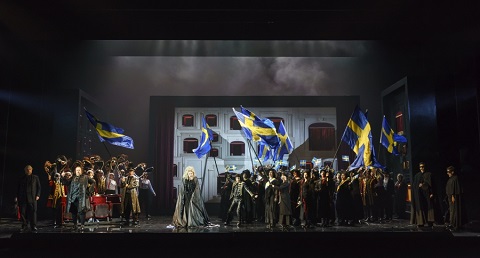 Whatever, Ulrica (Sara Fulgoni) herself makes the first of her many – often
unscripted – appearances in this opening scene, for Pountney makes the
soothsayer a prominent presence, much in the same way that Justina
Gringyt?’s Preziosilla haunted last year’s La forza. We also meet
the conspirators, squashed under the coffin, revealed by the lifting of the
black drape; cloaked and masked, they seem to have stepped from the pages
of a comic strip and it’s hard to believe that they present a credible
threat to Riccardo. The ‘seriousness’ of the drama is further quashed at
the end of the opening scene when the Chorus whip off their top hats and
tails, and trade them for naval and pirate costumes complete with tricorns
and eye-patches. When they essay a conga around the stage we’ve crossed
into Gilbert & Sullivan territory. 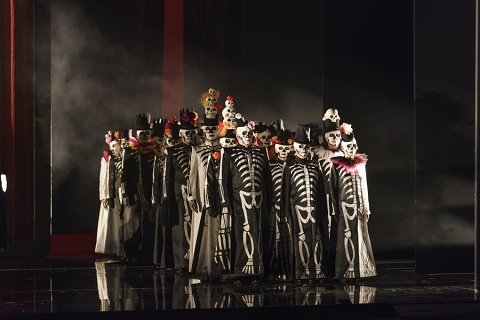 The gothic excess is pushed to extremes in Act 1 Scene 2. Ulrica is a sort
of Madame Blavatsky surrounded by billowing smoke and grim acolytes
thrusting fateful fingers-on-sticks and dollar-sloganed tin-cans at
gullible punters. Fulgoni doesn’t always surmount the orchestral fabric but
she sings with blazing intensity. Later both she and the dark-toned
conspirators, Samuel (Jihoon Kim) and Tom (Tristan Hambleton) are whizzed
about on a high chair on wheels – is this an allusion to the Throne of
State of Milton’s Satan in Paradise Lost? By the time the top hats
have sprouted lycanthropic adornments with flashing red eyes, the acolytes
begin stabbing needles into red poppets, and the orange-lit wall niches are
filled with skulls, we’ve truly wandered onto a Rocky Horror Show set. In a
crowning gesture, in the final scene the Chorus’s elegant evening dress is
shed to reveal enough skeletons to seriously rattle the censors; it’s the
Day of the Dead, clearly, but the destined corpse doesn’t die. Instead,
Riccardo watches as a cipher takes the knife. 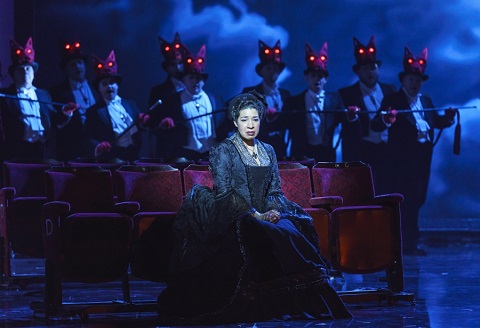 It’s almost as if Pountney has presented Verdi’s opera at one remove, allowing the
director – or the Swedish King himself – to present his own ballo in maschera of Verdi’s Un ballo in maschera. Clever
stuff, and often intriguing, but occasionally baffling.