An ambitious work for any theater, Street Scene is especially challenging for younger singers because it encompasses such a variety of styles, from blues to jazz, to popular dance idioms of the 1940s, to Puccini-esque arias and complex ensemble numbers, let alone the many intervening moments of spoken dialogue. Maestro Craig Kier, the orchestra comprised of the University of Maryland (UMD) School of Music students, and the cast sparkled in their energetic opening performance, not completely devoid of stumbles, but entirely entertaining. The production is a part of the Kurt Weill Festival, funded partially by the Kurt Weill Foundation, hosted by the UMD School of Music, and spearheaded by the MOS director Kier. This year-long celebration of Kurt Weill is also a component of the UMD’s Year of Immigration initiative. 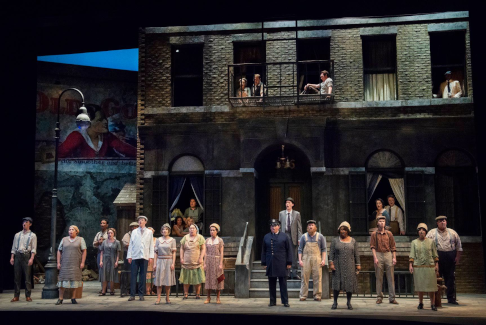 Kurt Weill considered opera his “real field of activity,” and throughout his career wrote extensively for the stage. Yet, in America as in Berlin, he was constantly trying to circumvent the well-trodden tropes of established classical opera and define his own place within the operatic tradition. In this pursuit, the composer used popular culture as a foundation for his innovative musical ideas. In 1946, Weill decided to use the Pulitzer Prize-winning play Street Scene by Elmer Price for his new opera, designed to be uniquely American and intended for a premiere on Broadway. Weill knew Rice personally, had seen the play, and saw potential in the raw realism of its subject and characters. It was to be an American urban folk tale, set in one of the storied tenements of New York City. Weill engaged the celebrated African-American poet Langston Hughes as lyricist, to adapt Rice’s text to song, but also kept many passages of spoken dialogue intact. The composer brilliantly combines text and music, using the orchestra to underscore and comment on the action, as well as set up and accompany vocal numbers. As you hear and see a blending of the Broadway song and dance style with traditional operatic arias, it may not be quite so apparent how enormous the challenge is to the conductor and orchestra to navigate and prepare for suc stylistic shifts. Maestro Kier deftly navigated these hurdles, as the UMD orchestra valiantly (mostly) followed.

The hotbed of musical ingenuity and stylistic medley that is Street Scene may not be for everyone, and neither is its dark, troubling plot. Set over the course of a single day on the street in front of a tenement building, the first act begins with the neighbors complaining about the oppressive heat, and focuses on Anna Muerrant (Helena Crothers), a mother and wife, who desperately wishes to believes that there might be more to her lonely and unfulfilling existence. Only a few minutes into the show, the barely disguised hints and gossip from her nosey neighbors reveal that she is carrying on an affair with the sleazy milkman. Crothers brought a melancholy strength to Mrs. Muerrant’s soaring arias. When Mrs. Muerrant’s teenage son stumbles onstage, having been in a rough fight defending her reputation, we begin to understand that the neighborhood gossip is taking hold. Soon it reaches Mrs. Meurrant’s eldest child, beautiful Rose (Shafali Jalota). As Rose navigates her mother’s protestations, her father’s thinly veiled anger, abuse, and neglect, while fending off unwanted attention from a variety of men, she finds solace in Sam Kaplan (Samual Keeler), her quiet, nerdy neighbor and friend. Jalota and Keeler shone in their innocently staged duet at the close of the act, as the two sit together on the front steps of the building, dreaming of leaving it together. 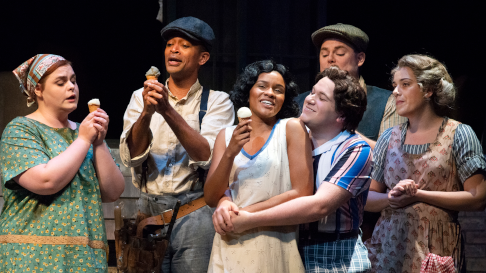 Another highlight of the first act and a special moment of true hilarity was the famous Ice-Cream Sextet, a dramatic ode to the magnificence of ice-cream on a hot day. The star of the sextet and other lighthearted interludes was Dallas Gray, who electrified the audience with his energy and comedic timing as one of the building’s denizens, Italian musician Lippo Fiorentino.

Dramatically much faster-paced and more difficult to follow, the second act begins with a new life, as a birth is celebrated in the building, transitions through a double-murder by Mr. Muerrant of his wife and her lover, and closes with a departure, as Rose leaves the tenement and Sam to face an unknown future alone. Meanwhile, Park Avenue nannies ogle the infamous murder scene, prospective tenants view the Muerrant’s now-vacant apartment, while the remaining neighbors again complain of the heat, as the curtain falls.

One of this production’s great strengths lies in its remarkable set (Ryan Fox) and lighting design (Peter Leibold IV). The exquisitely crafted, looming tenement building, reaching up to the rafters, provides stability to the complex drama, while each of the six windows of the house brings clarity but also circumscribes the less central storylines taking place in individual apartments, not allowing them to overshadow the opera’s dominant themes of oppression, poverty, and desperate loneliness. The lighting follows the changing time of day in the story with the subtle shifts of color and shadows.

Another pleasant surprise was the strength of acting demonstrated by some of the cast, although, in that, many disparities are to be expected. Crothers in particular brought an inner strength to Mrs. Muerrant, who might otherwise have been seen as a weak and superficial character. Keeler also was up to the challenge of elevating Sam to hold his own opposite Rose/Jalota’s stunning vocal technique and poised stage presence.

Although the political undertone of this opera – a new look at the success, failure, and reality of the American dream – was not particularly highlighted in this production, it did bring to the fore the distinctly different (if brashly accented) ethnicities of families and individuals inhabiting the tenement. And, as a part of the Year of Immigration, the MOS production of Street Scene lends a folkloric quality to this vitally contemporary topic by its picturesque depiction of the quirky locals and immigrants coexisting within the squalid but undeniably lively New York City slum. How much more American could it be?