For her, Dutch National Opera has revived Robert Wilson’s ultra-minimalistic Madama Butterfly, first unveiled in 1993 at the Paris Opera, and presented many times since at various houses. The severe beauty of the production has not aged a bit. Yet, despite the satisfaction they give to the senses, both Wilson’s images and Stikhina’s singing leave one wanting more.

Bearing all the Wilson hallmarks, this Butterfly is choreographed in precise, stylized movement inspired by Japanese Noh theatre and Butoh dance. The demands on the singers are great. They must do things like sustain legato while rising slowly from a kneeling position, and move fluidly across the rough graveled surface delineating Butterfly’s garden, which surrounds the wooden floor representing her house. The absence of an actual set is offset by a lit backdrop that changes from cerulean blue to blood red to a rose-and-peach dawn. Extreme minimalism also means hardly any props. Blossoms are completely absent from the Flower Duet between Cio-Cio-San, the disposable bride of U.S. naval officer F.B. Pinkerton, and her maid Suzuki. Cio-Cio-San’s possessions, such as her mirror and fan, are conjured up by hand gestures, as is the knife with which she ultimately kills herself. When the letter from Pinkerton that seals her fate appears in a real envelope its material presence is almost shocking. 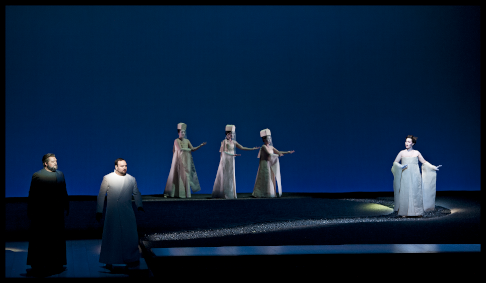 Naturally, Cio-Cio-San’s death is blood-free. She quivers and falls lifeless in slow motion, like the pinned butterfly she prophetically describes on her wedding night. At the other extreme, Puccini’s score is hyperdescriptive, teeming with birdsong and gongs, imitating winded gaits and graceful steps. Whether the contrast between the spare visuals and the score results in heightened drama or an unnerving emotional dissonance depends on to what extent one accepts Wilson’s aesthetic. It is certain, however, that for the first to happen, the singers need to provide the feelings that animate the formalized beauty of their surroundings. How do you move with mathematically plotted grace and move hearts at the same time? Projecting great warmth and tenderness, the luxurious mezzo-soprano Enkelejda Shkosa as Suzuki proved it can be done.

Baritone Brian Mulligan as the American consul Sharpless seemed less comfortable in his choreographic straitjacket, but sang sonorously, his generous sound exercising a kindly authority. Character tenor Saverio Fiore was appropriately irritating as the marriage broker Goro, soon finding his feet after a vocally shaky beginning. Among the minor roles, there were strong contributions from Anneleen Bijnen as Kate Pinkerton, Martin Mkhize as the Imperial Commissioner and Carlo Cigni as a forbidding Uncle Bonze. Sergio Escobar’s trumpeted top notes, with fearlessly open Italian vowels, embodied Pinkerton’s odious sense of entitlement. His tenor was less appealing at mezza voce, but Pinkerton is an arrogant sensualist and does not necessarily require great vocal subtlety. 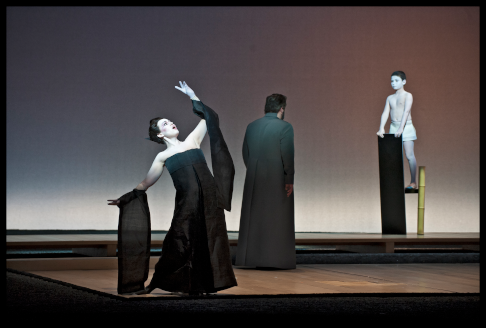 Elena Stikhina as Cio-Cio-San and Brian Mulligan as Sharpless

Soprano Elena Stikhina has a truly special voice, satiny and evenly produced. Initially, she held her high notes only briefly, skipping the elective high D flat at Cio-Cio-San’s entrance, but in Acts Two and Three, where they really matter, her top notes cleaved the air dazzlingly. The rest of the voice is so gorgeous, you never went her to stop singing. And yet, her portrayal was too even-keeled to fully encompass Butterfly’s tragedy. A certain equanimity in Act One could be explained by Butterfly tentatively trying on her new role as an American Navy wife. Wilson’s direction, especially in the mannered love duet, certainly lends itself to this interpretation. But, as her world fell apart, Stikhina only skimmed the surface of Butterfly’s deep dejection. Hope, disappointment, shame and terror all sounded golden, but very similar to each other. Perhaps in a more conventional stetting her characterization would have been more detailed. On opening night, however, Stikhina’s Butterfly, like Wilson’s staging, came wrapped in loveliness but lacked a throbbing heart.

In the pit, the Residentie Orkest did not have the greatest start. The bustle of the wedding preparations sounded bumbling rather than energized. Gradually, the musicians caught up with conductor Jader Bignamini, but the overall impression was of an ensemble that had progressed little beyond technical mastery of the score. Bignamini tried all night to stir up the broad sweep essential for Puccinian drama, to no avail. The orchestra responded mostly by playing loudly, with little dynamic purpose or refinement of expression. Something went wrong between a conductor with an audibly clear sense of direction and this usually highly competent orchestra. On the other hand, each brief appearance of the Dutch National Opera Chorus lifted the performance to its expected level. As Cio-Cio-San’s family, they were also a sight to behold in Frida Parmeggiani’s handsomely sculpted costumes. With so many pluses, this run of Madama Butterfly has the potential to simmer into something more potent than was brewed at the premiere.