But, the meditative, poetic, sacred drama on the Passion story -known as the Brockes-Passion, though its full title is Der f¸r die S¸nden der Welt gemarterte und sterbende Jesus aus den vier Evangelisten in gebundener Rede vorgestellt (Jesus who was martyred and died for the sins of the world, presented in verse out of the four Evangelists) – which the Hamburg writer and politician published in 1712 was set almost as many times as some of the Caesarean Poet’s opera seria libretti.

Brockes’ ripe and raw imagery was still hot off the press when it was set
by Reinhard Keiser in 1712; Georg Philipp Telemann offered his efforts in
1716. Round about that time (the exact date is unverified), Georg Frideric
Handel, then resident in London but a friend of Brockes from their time as
students at the University of Halle, composed his Brockes-Passion.
Johann Mattheson added to the tally in 1718, and further interpretations by
Johann Friedrich Fasch (1723) and Gottfried Heinrich Stˆlzel (1725)
followed; there were at least five other settings.

The question is – as Dr Ruth Smith asks in her learned, eloquent programme
article – what prompted Handel to compose this work, specifically for
performance in Hamburg where it was first heard on Good Friday, 3 rd April 1719, 300 years before this performance at the Barbican
Hall by the Academy of Ancient Music? Smith essays a few possibilities: the
performance tradition which required German Kapellmeisters to produce
Passion music each year for Holy Week services did not exist in England;
such a work was unsuitable for London’s secular theatres, then Handel’s
predominant performance venue; London audiences would have found both the
German text and Brockes’ blend of the metaphysical and vividly pictorial
similarly distasteful; political unrest in England may have made Handel
anxious to keep in with the potential employers in his homeland, should
need arise.

We shall probably never know for sure. There is no extant autograph and the
various surviving copies – one of which was begun c.1746 by J.S. Bach, who
performed Handel’s Brockes-Passion in Leipzig on Good Friday that
year, and completed in 1748 by colleagues – disagree in diverse ways. For
this AAM performance, Leo Duarte, working with a team of scholars and
musicologists, has produced a new edition which takes into account new
sources that have come to light since the last critical edition of 1965.

Brockes’ narrative combines elements of the Passion story selected from all
four gospels, and two striking aspects of the text are its dramatic
immediacy and its very human dimension. The Evangelist plays a minimal
narrative role and events are largely presented as experienced in the
present tense by the protagonists of the drama – Jesus, Peter, Mary, Judas,
Pilate, the Disciples, a Centurion and others – in a chain of arias,
ariosos, recitatives, choruses and chorales (the latter kept to a minimum).
The 104 (in this edition) separate numbers form a strikingly innovative
musico-dramatic sequence. 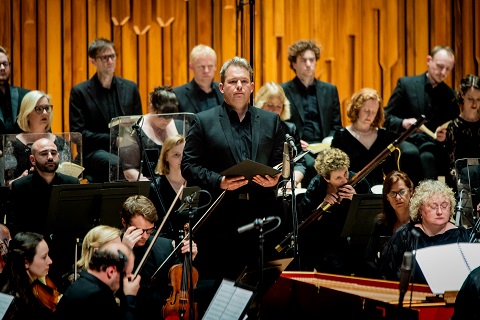 Thus, the opening Chorus of Faithful Souls, which director/harpsichordist
Richard Egarr ensured was hushed and reverential, sing: “To cure me from
the festering sores of vice/he allows himself to be wounded./To cover up
the stains of my sins,/he must dye them with his own blood. Yes, to grant
me everlasting life,/even life itself wishes to die.” Christ’s Passion is
corporeal, but his sacrifice is an act of redemption and our liberation is
eternal. And, as Smith pointed out in a pre-concert talk, the first word of
the text is ‘Mich’ – Christ suffered “To free me from the bonds of my sins,” the Faithful Souls whisper.

Certainly, Brockes ensures the corporeality of Christ’s suffering is
viscerally vivid and brutal. Translator Moritz Grimm has retained the
astonishingly graphic, often quasi-erotic, conceits of Brockes’ text which
abounds with explicit imagery. The Evangelist describes the “terrible
convulsions” of Christ’s agony: “he could hardly gasp for pain;/One saw his
frail limbs tremble,/his dry mouth barely breathing”; and of his
Crucifixion, when the soldiers “scourged his tender back with lashes full
of nails”. The Daughter of Zion’s heart dissolves “into tears” at the sight
of Jesus’ “pitiful groans”, his “whimpering, sighing, longing”, and
imagines his bloodied body with graphic intensity: “the rose itself begins
to sweat rubies” and as the “thorns’ inflexible claws so wretchedly
[press]” into Jesus’ head, his “delicate temples are perforated and
pierced/right through to the bone.” No wonder the contemporary authorities
were not very keen on allowing it to be used in liturgical contexts.

Handel, not surprisingly, responds richly, with imagination and
concentration, to the intense human emotions to which Brockes’ text gives
life, and the AAM soloists – most of whom were seated along a strip of red
carpet at the front of the stage – and instrumentalists communicated the
musical drama and feeling with compelling commitment and power.

The Daughter of Zion bears much of the burden of reflection on man’s
foolishness, cruelty, torment and salvation, and Elizabeth Watts sang with
tremendous poise and presence. Her foreboding address to those who
“squander God’s grace” – “Know that punishment is already coming/As the
fruit of your sins ripens!” – was beautiful and terrifying in equal
measure; the piquant harmony of the repetition of the final phrase, the
fortissimo weight of the full complement of wind, and the long-bowed chords
in the strings seemed to throb with pain and portentousness. 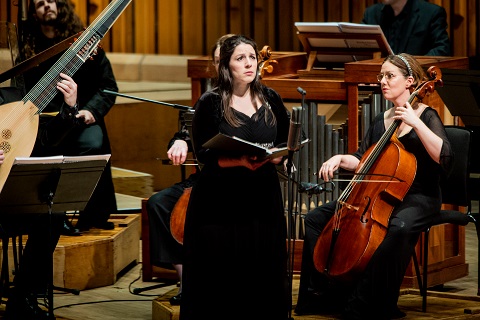 Tenor Gwilym Bowen was a superb Peter, capturing the diverse and
contradictory emotions experienced by the troubled disciple in an extended
sequence in the first part of the Passion. Anger at Judas’ betrayal of
Jesus blazed through the running lines of “Poison and fire, lightning and
flood”, accompanied by agile unison strings; his avowal that he would not
forsake Christ, “Take me with you, cowardly crowd” was sincere and soft,
the fine, unwavering line complemented by Sarah McMahon’s eloquent cello
obbligato.

The singers in more minor roles each delved to the core of their
character’s emotional response. Nicky Spence’s Faithful Soul (tenor)
bristled with rage, the lovely warmth of his tenor winning empathy for his
indignation; Spence’s rhetorical rise and fermata at the start of the da
capo repeat – “Consider”, he commanded the “nest of vipers” – was as
transfixing as the softness of his head voice at the close. 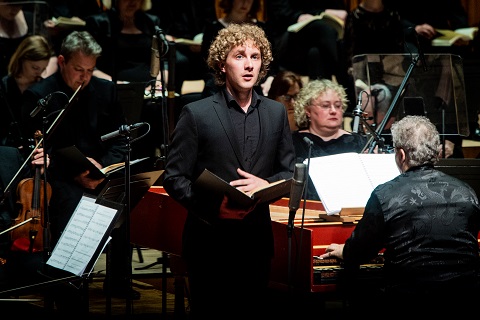 Judas’ recitative and aria of self-castigation, “Do not leave this deed
unavenged,/tear apart my flesh, crush my bones”, was superbly sung by
countertenor Tim Mead, the cello’s gravelly tremolos and the harpsichord’s
stabbing chords underlying the anguish of his appeal, “open for me the dark
path to Hell!” As Pilate, Caiaphas and the Centurion, Morgan Pearse sang
with firmness and resonance.

In the second part of the Passion, the female voices are given more
prominence and here Ruby Hughes’ fresh, strong soprano and clarity of line
conveyed the passionate faith of the Faithful Soul (soprano), while the
exchanges between Rachel Lloyd’s Mary and Cody Quattlebaum’s Jesus were
persuasively sincere and human.

Da capo arias are less common than usual, and here the repeated A sections
were infrequently decorated, which made those expressive elaborations that
were offered more affecting. The pathos of the Daughter of Zion’s reprised
pain as Jesus’ body dissolves into blood was sharpened by a sudden ascent
in pitch and dynamic, against the delicate silkiness of violins; the
bitterness of her anger at the Soldier who accuses Jesus of heresy –
expressed through the angularity of the violins’ short motifs, the racing
scales of the vocal line and the acerbic harmonic twist of a cadential
figure – was made more raw by an extravagant final vocal leap.

Duartes’ edition adds four oboes and two bassoons to a seventeen-strong
body of strings, supported by theorbo, harpsichord and organ, and though
these forces might seem quite limited in timbral range, Handel exploits
every potential for colour and texture. The combined violins and oboes
enhanced the sweetness of the assurance of grace expressed in Watts’ first
aria, while her angry rebuke to the Sinners, “behold with fear and
apprehension/the monster of your sins” was coloured by the darker hues of
cello, oboe and organ. Duartes’ plangent oboe deepened the pity of Peter’s
anguish, so affectingly communicated by Bowen, while leader Bojan ?i?i?’s
obbligato heightened the colour and intensity of the soprano Faithful
Soul’s vision of Christ’s lacerated back, brightly hued and resembling “the
sky/adorned with countless rainbows”. 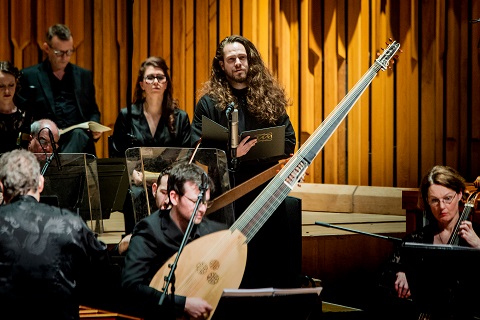 Between the solo numbers, short choral interjections broaden the
perspective of the drama. In a jaunty chorale, the collective voice of The
Christian Church buoyantly anticipated being “united with God, through
God!” Later the Disciples, seeing Christ bound with ropes and chains, cried
agitatedly, “Come, let us flee and save ourselves!”, the repetitions
emphasising their panic and cowardice. Then, in reply to Pilate’s imperious
question, “What then shall I do with your so-called king”, the populace’s
violent demands were chillingly vigorous: “Away with him!/Let him be
crucified!”

I was not wholly convinced by the decision to place Robert Murray’s
Evangelist and Cody Quattlebaum’s Jesus at the rear, stage right and left
respectively, between orchestra and choir. My impression may have been
influenced by my position in the Hall, but it seemed to me that Murray
fared best: his tenor, strong and direct, projected cleanly, and he was
ever-sensitive to text and situation. Following Pilate’s urgent command to
Christ, “And will you say nothing to defend yourself”, the softness of the
Evangelist’s simple statement, “And he said nothing more”, was deeply
moving. In contrast, Murray’s restatement of Christ’s cries, “Eli, Eli,
lama sabachthan!”, “My God, my God, why have you forsaken me?” rang through
the Hall with real anguish, the feeling deepened by the dark, crushing
resonance of the organ. The response from Spence’s Faithful Soul and the
strings was an almost apocalyptic fury, conveyed through volcanic rhythmic
disruptions and unyielding unisons.

Quattlebaum was nestled behind the organ, cellos and double bass, obscured
from my view not only by these instrumentalists but also by his own leonine
mane, just as his lovely tender bass seemed sometimes absorbed into the
lower instruments colour and timbre. Nor did the positioning aid the drama:
Peter’s denial was delivered from the front of the stage, to the audience,
with Bowen occasionally glancing over his shoulder to Jesus far behind him.
That said, Quattlebaum conveyed both Jesus’ agony and spiritual calm with
real conviction: lines such as, “It is certain, for thus has it been
written” and “It is accomplished” were replete with composure and
assurance. And, the bass’s long, even lyrical lines were beautifully
shaped; his attention to the text in ‘My Father, my Father!’ was
wonderfully expressive.

The performance began with great vivacity but in the second part Egarr was
challenged to sustain the dramatic momentum through the long sequence of
somewhat sanctimonious contributions from the Daughter of Zion, with
additional reflective commentary from sundry Faithful Souls. Despite Watts’
unceasingly thoughtfulness, care and vocal skill, and the variety of
instrumental complements employed – first organ and harpsichord alone, then
cello obbligato and lute, for her harsh castigations and violent tirades;
and, a soothing balm of woodwind and organ for her address to Christ whose
“loving heart melts for love” – it is surely difficult for modern-day
audiences to respond to such extended, impassioned reflections with the
devout piety that they were intended to arouse in the hearts and minds of
liturgical audiences in Handel’s time?

However, at the close, a simplicity returned. Watts’ final command, “Wipe
away your bitter tears,/be at peace now, blessed soul!”, was first sung
unaccompanied, then intertwined with the benedictions of the oboe, before
The Christian Church’s closing chorale delivered unadorned and
unquestionable consolation: “You have gained eternal life for me/through
your death.”

In autumn 2019, the AAM will release a new recording of Handel’s
Brockes-Passion: