The company last presented the 203-year old opera buffa in November 2010,
with its newest incarnation stage directed by Montreal’s Alain
Gauthier for its three performances held on April 6th, 9th, and 12th. The
185-minute production (including intermission) boasted a strong cast of
five principals with Tyrone Paterson leading the Winnipeg Symphony
Orchestra with his customary finesse.

Based on Cesare Sterbini’s Italian libretto, the production now
transplanted from the 1800s to early 20th century Seville is admittedly
plot-shy, relying rather on its stable of colourful characters painted in
broad brushstrokes to bring its narrative to life.

First up is Figaro, with internationally renowned Canadian lyric baritone
Elliot Madore’s dazzling MO debut as the tall, dark and strapping
barber exuding conviction and swaggering ease every time he took the stage
during the April 6th opening night performance, his booming vocals that
filled the hall matched only by his flashing kilowatt smile. 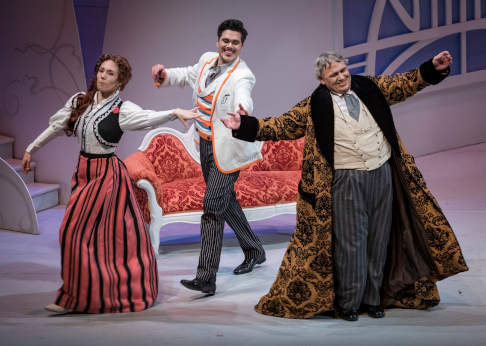 He nearly stopped the show with his Act I entrance aria, “Largo al
Factotum”, receiving prolonged applause with cries of bravo for his
performance that only gathered momentum until his final, enthralling burst
of tongue-twisting patter spat out with razor-sharp precision. It is hoped
that the Toronto-born dynamo, who has also graced such illustrious opera
houses as Metropolitan Opera, San Francisco Opera, Zurich Opera House,
Glyndebourne Festival Opera and Bavarian State Opera, among others, will
return to the MO stage again – and soon.

Like Madore, Hill is also a crackerjack actor, possessing a flawless
comedic timing that includes furiously plucking flower petals in rhythm
during her colouratura passages, and mugging and mocking Bartolo during the
Act II “lesson scene” that elicited open guffaws from the
crowd.

American tenor Andrew Owens (MO debut) as Count Almaviva – first appearing
as poor student Lindoro – admittedly had a tough act to follow with
his own opening cavatina, “Ecco, ridente in cielo” performed in
the riptide of Winnipeg baritone David Watson’s servant Fiorello
(also doubling as the Notary), with the latter’s earth-shaking vocals
always seeming a force of nature.

American baritone Steven Condy (MO debut) created an imperious Dr. Bartolo
who bellows orders to his charge, also not afraid to let his own hair down
when warbling during his own number in falsetto after taking over from
Rosina’s “The Useless Precaution” during her singing
lesson. His “A un dottor della mia sorte” that ends with his
own crisply executed patter did not disappoint, equally straddling both
worlds of hilarity and threatening power that also fascinated.

Special mention must be made of Winnipeg soprano Andrea Lett who threw
herself into her role as whiskey-swilling, cigarette-puffing maid Berta.
Her heart-wrenching Act II aria “Il vecchiotto cerca moglie” in
which she reveals her fear of growing old without love became the
opera’s poignant underbelly and sober second thought, sung with
artful compassion.

Gauthier – who also directed MO”s production of Verdi’s
La Traviata in November 2017 – wisely allows his cast to venture
off-leash as the show progresses with the well-staged production (albeit a
trifle “park ‘n’ bark” at times) eliciting frequent
hoots of laughter from the crowd.

A recurring visual leitmotif of umbrellas held aloft and twirled at
strategic points (mostly) by an all-male Manitoba Opera Chorus (prepared by
Tadeusz Biernacki) created fascinating counterpoint to the voices. Pure
magic also arose during Act I’s final chorus “Mi par d’esser
con la testa” when the policemen’s “bayonets”
suddenly morph into brollies. However, despite the tightly synchronized
choreography, this clever idea began to feel too much of a good thing as
overly fussy stage business, pulling focus from the leads also gamely
navigating their own rain gear props.

The first Act alone clocks in at 105 minutes, with several scenes,
including extended recitatives between characters needing to be tightened
further. Still, the production’s palpable joy delivered with gusto by
a well-balanced cast made one long for their own well-coiffed Figaro, able
to fix all of life’s woes with a swish of his wrist and gleam in his
all-knowing, watchful eye.