The audience rose as one to vociferously cheer her stunning assumption of the taxing part, which she lavished throughout with poised, shining tone; rock solid technique; and fiery dramatic commitment. Ms. Todd, petite and lovely, was not only believable as the tentative, naive 15-year old geisha of Act I, but rose to the ranks of great tragediennes as her fate is subsequently sealed. Her ravishing instrument caresses Puccini’s lush phrases with a radiant luster, and her plush, ample lyric soprano rides the orchestra with ease. Her total accomplishment is all the more remarkable for the fact that she is singing the role in Japanese translation.
To underscore the disparity of cultures, director Josh Shaw and conductor Eiki Isomura have conspired to create a text that has the native characters singing in Japanese and the Americans singing in English (with Cio-Cio San transliterated). It is a concept with considerable merit, and is cleverly deployed. Goro becomes more than marriage broker, also serving as translator. Consul Sharpless speaks a fair share of Japanese, most especially in the long scene with Cho-Cho San in Act II. Occasional bursts of English from Butterfly are charming attempts to connect outside her cultural and linguistic restraints. 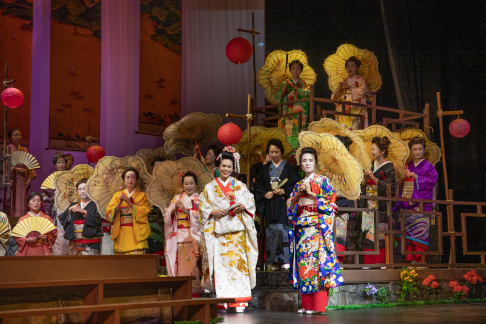 The success of this approach resulted in some stunning moments in even the simplest ways, for example, Suzuki having to mutter Yes as Hai instead of Si. The alternate text in no way interfered with the composition, and while the words might have Japanese or English resonance, the musical gesture remained rooted in
Puccini’s veristic Italian style.
Maestro Isomura elicited vividly distinctive playing from his orchestra. While string sections for Puccini undertakings are often three times this in number, the reduced ensemble played with stylish assurance. The brass and winds added all the colorful touches the score requires, and the percussion, even with a smaller arsenal, ably underscored the action. Isomura’s assured baton masterfully partnered with the singers, phrasing with the elasticity the composition requires, but always keeping the drama moving inexorably forward. The large chorus sang with commitment and skill, as effectively prepared by chorus master Naoko Suga.
Peter Lake was a commendable B.F. Pinkerton, his caddish intentions offset by a pleasing, poised tenor that beautifully complemented and intertwined with Ms. Todd’s vocalizing in the Act I duet. Thanks to Mr. Lake’s reliable technique, the role holds no terrors for him, although in the beginning pages his high notes seemed just a bit veiled compared to his ringing middle and upper middle phrases. Nonetheless his impersonation of the opportunistic sailor was redeemed by his believable remorse at his actions. 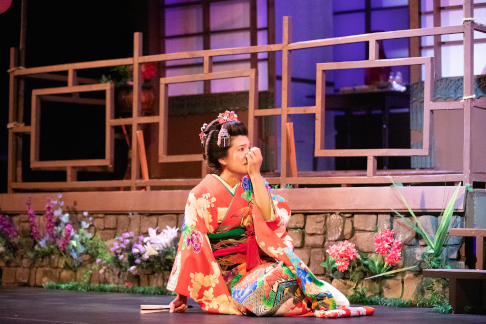 Sharpless was a perfect fit for Kenneth Stavert, his burnished, powerful baritone a thing of power and beauty. If at times he seemed a mite uncomfortable in his own skin on stage, Mr. Stavert used it to his advantage in his awkward mission in Act II, trying and failing to dissuade Cho-Cho San from futile waiting for Pinkerton’s return. His was as polished a musical rendition of this role as I have heard, and his natural way with the Japanese text was assured and impressive.
As Suzuki, Kimberly Sogioka’s diminutive stature could not have prepared us for the size and power of her vibrant mezzo. Ms. Sogioka could be winningly pitiable one minute, and ferociously defensive the next. Her limpid singing with Cho-Cho San in the Flower Duet was one of the show’s joyful highlights. All the smaller roles were cast from strength.
Eiji Miura was an engaging Goro, his slender, attractive tenor falling easily on the ear, but when he was upstage it was occasionally difficult to hear him. Hisato Masuyama was memorably a truly frightening presence as the Bonze, hurling his accusations with biting tone and posturing in a stylized Asian manner. Steve Moritsugu was a wonderfully oily Yamidori, as he deployed a gentle, pliable tenor.
Chelsea Obermeier sang attractively and offered a conflicted Kate Pinkerton, who first sees Cho-Cho San as a curiosity but comes to appreciate her sacrifice. Norge Yip and Takuya Matsumoto did all that was required as they dispatched solid portrayals of the Imperial Commissioner and Registrar, respectively. Young, blond Jussi Sjˆwall fidgeted adorably as Sorrow. 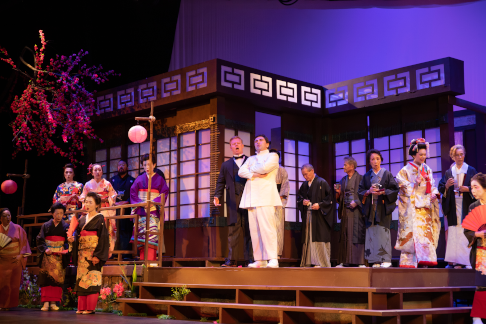 Josh Shaw the set designer gave Josh Shaw the director a lovely playing space in which to move his actors about. The dominating structure of the house stage right was complemented by terraced walkways and porches that skirted the edifice. I especially like the elevated upper terrace down left, from which characters could dominate a scene, and/or simply observe. It is from here that Butterfly inscrutably scans the horizon with her telescope at the end of Act II.
There are many finely detailed touches in the direction and design. A flag makes for an amusing revelation, then becomes a tragic prop. The strewing of the flowers morphs into a surprising coup de theatre of visual delight. I won’t spoil the final moment except to say the sequencing of actions and resulting tableau is perhaps the most affecting impression I have yet encountered for this well-known climax.
Adding to the success of the physical production, costume designer Sueko Oshimoto has devised an array of the most colorful, eye-popping kimonos I have ever seen. Throughout, the attire established and reinforced the characters and their stations. Bo Tindell also provided splashes of color in a well-realized lighting design with a significant number of area specials and effects. On occasion the cuing seemed a bit abrupt such as the night to dawn transition between Acts II and III, but that is a small quibble in otherwise well-considered illumination.
Director Shaw created very inventive, well-motivated blocking which used every bit of the space to good advantage. He also nurtured character relationships that seemed spontaneous and believable, all the while simmering with subtext and background. If I had one wish it would be that the wedding scene could evolve into more varied, shifting stage pictures that find the cast interacting less generically and more specifically.
That said, this was another remarkable achievement for POP, not only artistically but also commercially. The shows sold out thanks to an aggressive outreach to the Japanese and Asian community, with the performances in Japantown’s Aratani theatre. That the demographic responded well was evidenced by the large Asian presence in the SRO audience.
As a co-production with Houston’s Opera in the Heights, this version of Madama Butterfly will also perform there this season. Texans, you might want to score your tickets before it sells out.
James Sohre