Although known for his stage works such as Lost in the Stars and Die Dreigroschenoper, the latter a part of his groundbreaking collaboration with the theater innovator Bertolt Brecht (who also authored the text of Mahagonny-Songspiel), Kurt Weill often slips through the cracks of music history, proving too Broadway for the Met and too Met for Broadway. At the University of Maryland, however, the composer is being recognized and celebrated through a year-long Kurt Weill festival of courses, concerts, and staged productions, funded by the Kurt Weill Foundation for Music and featuring, among other things, this unique double-bill, quite an unusual choice for an opera studio. Why these pieces?

Zaubernacht and Mahagonny-Songspiel are two relatively early works of Kurt Weill’s career, and showcase a dramatic evolution in his compositional style. Zaubernacht, created in 1922 and originally billed as a children’s “ballet-pantomime,” is an hour-long danced drama, bookended by two soprano arias. Recently re-discovered and rarely performed since, at least partially due to its confusing genre, Zaubernacht was written while Weill was still a student, and although fascinating, contains few of his later artistic innovations. Mahagonny-Songspiel, composed a mere five years later, is a collection of loosely related songs that would eventually be expanded into a full-length Brecht/Weill opera, The Rise and Fall of the City of Mahagonny. This much shorter version (about 25 minutes) was commissioned for a prestigious festival of modernist mini-operas in Baden-Baden, where its edgiest element proved to be, ironically, its use of functional tonality and popular song. This embrace of the vernacular would come to define Weill’s music in later years, but even this early example made such a lasting impact on cultural imagination that its most recognizable number, “The Alabama Song,” would be covered by such diverse artists as The Doors (1967) and David Bowie (1980). 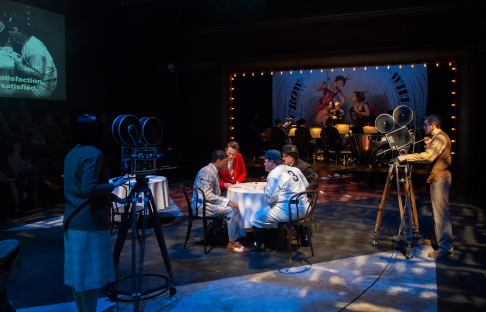 Yet despite the popularity of “The Alabama Song,” Mahagonny-Songspiel is rarely staged. The challenge is the almost complete absence of recognizable elements of storytelling. There is no clear plot; although there are characters (seemingly randomly named Charlie, Billy, Bobby, Jimmy, Jessie, and Bessie), there is no character history or development. Nor is there a clear setting, apart from the oft-referenced “City of Mahagonny,” which, as we later learn, is a “made-up place.” The staging is, therefore, very much up to an individual director’s interpretation, and the piece is, in fact, more often performed in a concert setting. The pairing of Zaubernacht and Mahagonny-Songspiel into a single evening of staged performances allows not only for an exciting juxtaposition of Weill’s two distinct compositional manners, but also offers an extraordinary display of the composer’s early experiments with staged musical genres.

Few institutions are set up to produce such an unusual double-bill, but The Clarice Smith Performing Arts Center, housing as it does the School of Music (home to the MOS), School of Theatre, Dance, and Performance Studies, as well as multiple state-of-the-art performance venues, was clearly up to the challenge. According to Maestro Craig Kier, artistic director of the MOS and conductor of Mahagonny-Songspiel, this was the studio’s first production to make use of the facility’s black box theatre, the Kogod, rather than the more traditionally “operatic” proscenium theater, the Kay, where they usually perform. Within the Kogod’s unique space, the floor was able to be properly prepared, with a full Marley dance floor installed forZaubernacht, then replaced by a theatrical painted floor for Mahagonny-Songspiel during intermission. Guest director David Lefkowich and the graduate-student design team also made full use of the black-box space by situating the audience along two opposite walls on either side of the action, while the orchestra was set up between them along the third wall, effectively framing the stage on three sides for a very intimate, immersive theatrical experience. This unusual set-up proved the perfect match for the two equally unusual pieces.

Zaubernacht was choreographed by UMD Dance Professor Adriane Fang (with the assistance of Sarah Beth Oppenheim, Amber Chabus, and Nicole Smeed) and performed by the undergraduate dance students. Although featuring a contemporary dance language, the plot of Zaubernacht was kept close to what was originally intended: after a child goes to sleep in her room (the original scenario involved two siblings), a Toy Fairy (shimmering soprano Shafali Jalota) brings her toys to life, facilitating a night of adventure. As the sun begins to rise the fairy returns to sing the toys back into their inanimate state. This loose scenario is the basis for nearly a full hour of lively characterizations and vivid pantomime choreographed by Ms. Fang—the words “character” and “pantomime” surprising but fitting words to describe an otherwise thoroughly 21 st-century dance work! The musicality of the dancers, working with a live orchestra (admirably conducted by Tiffany Lu), was exquisite, and the movement signatures of each character were fully developed and engaging. Although the movement itself was strong enough to carry the performance (an impressive feat for undergraduates!), the design team (most notably costume designer B. Benjamin Weigel) really brought the characters to life through imaginative “recycled” costuming that referenced both traditionally child-bedroom fabrics, textures, and patterns, as well as classic children’s toys, such as the “rock-em-sock-em” robots (with oven-mitt gloves), plastic soldiers (whose uniforms had a real plastic veneer), and even a stuffed glow worm (a goggle-wearing dancer wrapped in a sleeping bag). 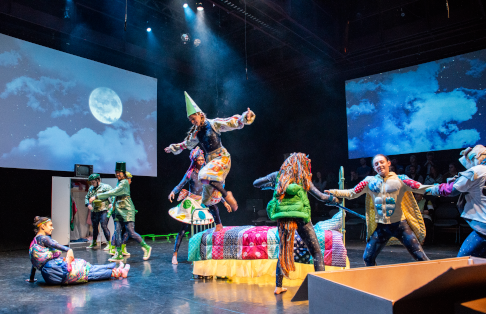 If the “children’s pantomime” aspirations of the young Kurt Weill seem ill-suited to a university audience, a small twist to the original naïve scenario matures the plot significantly. For what has happened to the second child in the story? Under Lefkowich’s direction, the brother of the protagonist has succumbed to an early and tragic death, and is represented only by a simple green sports jersey. Initially shown drowning her grief in her smartphone and TV, the child (danced by Eileen Cover) learns to process her loss through the help of her magically awakened toys. The surprisingly vivid acting, along with the movement and design, elevates a simple children’s piece to a richer psychological and artistic plane.

The “technological” theme, represented by Zaubernacht ’s cell phone, is carried over into the second half of the evening, where technology structures both the set and storyline of David Lefkowich’s Mahagonny-Songspiel. The performance space is transformed into a 1927 film set. Supernumeraries in drab colors actively work the set, operating cameras, moving props, and adjusting makeup, while the characters, reimagined as popular-culture stars Babe Ruth (Mike Hogue), Charlie Chaplin (Dallas Gray), Nat King Cole (Justin Harrison), James Dean (Jeremy Harr), Josephine Baker (Zyda Culpepper), and Marlene Dietrich (Amanda Staub), flounce around between acts, drinking, flirting, or criticizing each other’s dramatic acumen. Each song is brilliantly presented as a movie scene, shot live by the camera crew and projected onto large screens covering three of the theater walls. As the Songspiel progresses, the boundaries between stage and screen begin to disintegrate. The camera crew disappears, and the distinction between on-screen and off-screen acting gradually fades, until the audience, situated, as it is, so close to the action, can no longer tell whether the characters are still playing inmates of the “Mahagonny” asylum or are actually living in one. The work ends rather abruptly, in darkness, with only the sound of a man (Babe Ruth/Mike Hogue) sobbing on the floor. This complex dramatic journey was certainly a lot to accomplish in a mere 25-minute chamber opera, but Lefkowich’s brilliant staging (albeit sometimes overshadowed by the giant screens) clearly and quickly communicated the nuances of the plot and characters. The vocalists did a beautiful job, and were supported in numerous ways, large and small, by Maestro Kier and his ensemble, as the audience enjoyed the catchy tunes that had scandalized audiences from Baden-Baden to David Bowie’s record label.

In the 1920s, Kurt Weill (along with his collaborator Bertolt Brecht) were uncomfortable with the growing distance between classical and popular music. They believed that art needed to reach the masses. The evening-long trip from Zaubernacht to Mahagonny-Songspiel chronicles the early trajectory in Weill’s creative journey towards a more accessible musical style. For today’s audiences, the genre confusion of an operatic ballet and a plotless chamber opera placed together into an experimental theater space offers an artistic playground that is exciting, innovative, and engaging. But if you are looking for a completely different Weill experience, the MOS premieres the composer’s late American opera, Street Scene (1946) at the Kay Theater next week.