The story of Phaedra’s tragic incestuous desire for her stepson,
Hippolytus, as told by Euripides (Hippolytus), Seneca ( Phaedra) and Racine’s (PhËdre), has attracted
composers as diverse as Rameau and Britten, Paisiello and Massenet,
Schubert and Honegger. It was the myth that the then 81-year-old Hans
Werner Henze’s turned to for his fourteenth opera, Phaedra, in
2007, five years before the composer’s death.

The freedom with which Henze and his librettist, Christian Lehnert engaged
with the Greek myth might be thought to resemble Stravinsky’s and Cocteau’s
‘re-composition’ of Sophocles in Oedipus rex. But, instead of the
neoclassical distancing of Stravinsky’s ‘opera-oratorio after Sophocles’,
with its Latin libretto (translated from Cocteau’s French by AbbÈ Jean
DaniÈlou) and cool static quality – the narrator, in contemporary dress,
stands apart from the soloists who barely seem to interact with one another
– Henze’s and Lehnert’s ‘concert opera’ presents a visceral variation on
Euripides et al which embraces both violence and surrealism. And,
this terror and strangeness is embraced with engrossing intensity by
director Noa Naamat in this production, performed by five Jette Parker
Young Artists, in the ROH’s Linbury Theatre. 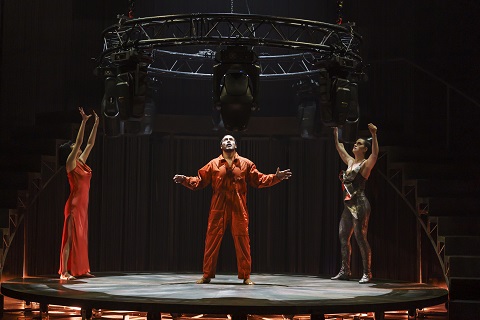 Part One of the opera follows the classical tale – more or less- in which
Phaedra, rejected by Hippolytus and driven by all-consuming lust and
self-loathing, lies to her husband, telling him that Hippolytus has raped
her. Theseus curses his son, and Hippolytus is dragged to his death under a
chariot when his horses are frightened by the Minotaur which as been
resurrected by the sea-god Poseidon. Phaedra hangs herself. 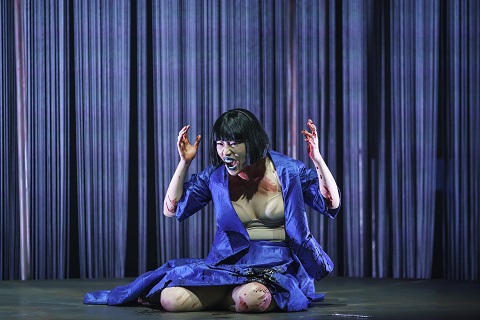 Part Two takes off into disorientating realms. Drawing on Euripides, and
incorporating symbolic allusions to the composer’s own life, Henze and
Lehnert make Phaedra and Hippolytus victims in a battle between Aphrodite
and Artemis. The latter, to whom Hippolytus has sworn chaste devotion (
rejecting the cult of Aphrodite), resurrects the young man, renames him
Virbius and brings him to Nemi in Italy. Phaedra and Aphrodite attempt to
drag Virbius back to the Underworld, imprisoning him in a cage. Artemis
rescues him and hides him in a cave, but Hippolytus’ identity and
consciousness become ever more fragmented and kaleidoscopic, until he is
subsumed into nature itself.

Lehnert’s abstractions and poetic elaborations render the strange stranger
still, and can be alienating. But, Naamat tells the story with startling
directness. The set (by takis) is simple, the characterisation strongly
defined and powerfully sustained. A double staircase rises boldly
centre-stage, carving slicing curves as it ascends to a platform from which
the Minotaur – resurrected in the opening moments with jolts of electric
light, horned and armoured like a walking armadillo, skulking with
Dionysian dynamism – looks down upon Hippolytus’s suffering. A
ribbon-curtain drapes from floor to ceiling, merging with the walls of the
Linbury, glistening, twitching, swishing, as the characters appear and
retreat. Part One’s bold aquamarine gives way to passionate orange after
Hippolytus’s rebirth. Lee Curran’s lighting isolates the characters with
starkness; a circular lighting-rig descends chillingly, like a giant iron
manacle, to imprison Hippolytus in a cage. 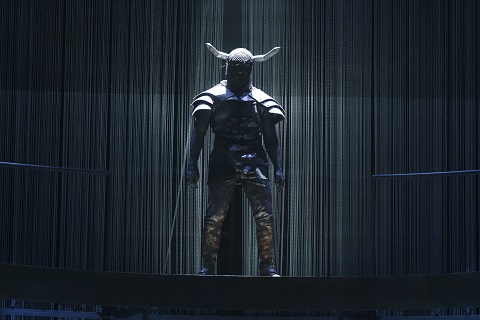 Henze does make use of some Greek oratorical devices, and at times his
characters address the audience directly, but Naamat emphasises their
interaction with each other, and the cast did battle with fierce,
terrifying intensity. Chinese mezzo-soprano Hongni Wu’s Phaedra prowled
with seductive menace, her voice darkening and searching for ever more
opulent colours as her decline deepened. Wu and Jacquelyn Stucker, as
Aphrodite, excelled in the episodes of climactic Bergian lyricism.
Stucker’s stage presence was thrillingly intense, emphasising the palpable
danger posed by the angry, vengeful goddess. 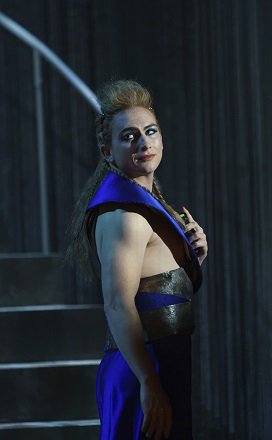 The first countertenor to participate in the JPYA scheme, Patrick Terry
relished the demands of the role of Artemis, which forced his voice high
and low, down to a speaking baritone. His confident performance skilfully
captured Artemis’s complexity. As Hippolytus, tenor Filipe Manu, who joins
the JPYA scheme in September this year, displayed both nobility and
vulnerability, his lyrical outbursts ringing with emotion. Michael
Mofidian, silent until the closing moments, sang with a warmth which drew
some sympathy for the Minotaur.

The timbral inventiveness of Henze’s orchestral score surprises and
scintillates, and the Southbank Sinfonia (supplemented by pre-recorded
sounds), conducted by Edmund Whitehead, relished its lyricism and
discordances equally. The percussive energy and distortions of the score
were tempered by moments of unexpected, haunting beauty, luring one into
the misty, dreamlike narrative. For all its storms, earthquakes and
destructive dialectics, this Phaedra throbbed with a strange,
almost hypnotising energy and life.