It’s a smallish trouser role, with two arias (pretty fiendish despite their
brevity), and Oscar does not normally make that much of an impact of an
audience. Indeed, one reviewer recently ventured that “Oscar, Gustavo’s
page, is the opera’s most thankless role. The character can seem chirpy and
annoying, but the role requires quick coloratura and quite a bit of
glamour-less ensemble singing.”

But, soprano Alison Langer, who is to perform the role of Oscar at

next month, tells me, without giving away any details or secrets, that
director Rodula Gaitanou’s conception of the page will surprise me: that
the role has been integrated much more fully into the wider action and that
there is “something new” about this interpretation. We’re only a few
minutes into our conversation and already I’m intrigued!


following her participation in the

last year, which saw her win accolades for her performance in the title
role of La traviata. One critic remarked that she “made a poised
and moving Violetta, bringing out the character’s youth, moving
successfully from the brilliance of Act One, through the tragedy of Act Two
to a powerful final scene … and in Act One she really made the coloratura
part of the performance, rather than a florid add-one”; another that
“Alison Langer presented a heroine who was all of a piece, naturally
sympathetic and retaining a certain reserve … her vocal interpretation,
anchored in the caressing warmth of her middle register, was admirably
integrated”. One reviewer concluded, “I have to confess that Violetta’s
death scene was one of the most moving I have witnessed in a long time.” 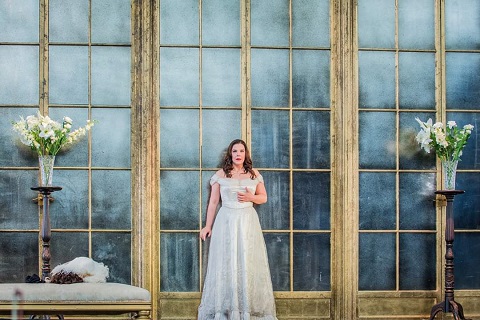 I ask Alison what she learned and gained during rehearsals for and
performances of that OHPYA La traviata? She replies that while she
was nervous about taking on the role, her repertoire had been moving in
that direction, so she decided to jump in the deep end and go for it. She
immediately knew that she’d made the right decision: “There was no
‘pressure’. The Young Artists Scheme offers a sort of ‘safety blanket’,
though the participants are absolutely treated as professional soloists.”

, and as the latter’s understudy she was immensely grateful that Lauren was
happy for her to watch rehearsals. So, she had two weeks observing the way
the opera was being staged. The Young Artists would work in a downstairs
room at St Gabriel’s Pimlico, while the main cast rehearsed above, so she
felt really involved in the production. The Young Artists had a full
sitzprobe and were able to get used to the Opera Holland Park stage. The YA
performances are very much an integral part of the season, and Alison
remarks that OHP “make quite a thing” of the YA performance, and that the
young singers are encouraged to engage with the audience after the
performance.

La traviata
did not just offer Alison the chance to perform a new role; it was also the
first time that she had covered a role. After her studies at the Guildhall
School of Music and Drama, she became a member of the Glyndebourne Chorus
in 2015 and in 2016 made her debut in the role of Bridesmaid in Le nozze di Figaro. So, she hadn’t had any experience as an
understudy, and La traviata “killed two birds”, so to speak.

The wide stage at Opera Holland Park is quite formidable, and Alison
comments that during the dress rehearsal she found herself “over-singing”:
“I came off-stage and if felt as if I had sung Violetta twice!” Her teacher
had observed the dress rehearsal and advised her that she didn’t need to
‘sing out’ so much; the acoustic at OHP is quite tricky, but the sound does
‘come back’. “It may be ‘outdoors’ but you don’t have to push so much,” she
explains.

So, Alison has begun rehearsals for Un ballo from a ‘running
start’, though the role itself finds her in unfamiliar waters. “I’m used to
playing characters who die at the end of the opera, so it’s strange to find
myself as the ‘comic relief’!” she says. She does consider previous
productions and interpretations when tackling a new role, but she likes to
find new ways of inhabiting the character: “it’s more fun”. She looks back
to La traviata and explains that, while she had to ‘fit into’ the
production, she couldn’t “just copy what Lauren was doing. I had to do it
my own way.” And, arias such as ‘Sempre libera’ offered such an
opportunity; Alison was pleased that Rodula Gaitanou gave her ‘permission’
to explore the role for herself.

In this production, she explains, Oscar and Gustavo are very good friends.
Alison has enjoyed getting into Oscar’s shoes and developing her
understanding of his character during rehearsals. She explains that one
might arrive with conceptions about a role, but then find that because the
people that you are acting with have different ideas, and you thus need to
change and adapt. And, of course, this affects the way that you use the
voice to communicate character and feeling. 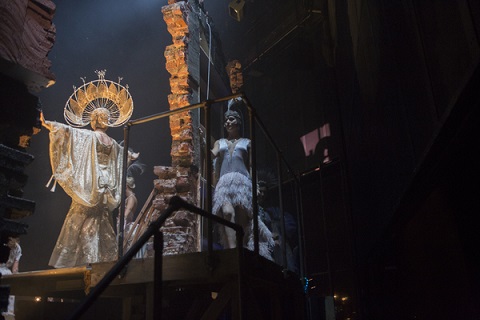 Alongside her operatic roles, Alison has been performing the role of Young
Heidi in Follies, which opened at the National Theatre in July
2017 and ran until January 2018; following January rehearsals this year,
it’s returned to the NT and she has performed for eight shows each week
since February. When I ask if it feels a bit relentless at times, Alison
responds, “Yes, it’s tough, but an experience I would recommend to any
young opera singer to build one’s stamina and appreciate the different work
ethic required – summoning the energy required day after day, and
travelling into London to perform show after show”. The musical theatre
world is a totally different terrain to the world of opera, she observes.
Not only are the cast performing night after night, but they are also
simultaneously auditioning for new roles – often for the same
roles, which can be difficult if eight performers are sharing a
dressing-room – and, they need to be ‘fresh’ every night! This is where the
Assistant Director plays a huge role: if things have gone a little ‘stale’,
he/she will need to encourage the cast to find new ways of approaching
their roles – “different thought processes”.

There are technical challenges too, such as adapting one’s voice to the
microphone. But, Alison had the good fortune to be performing with two
‘Dames’. Alison clearly relished working with Felicity Lott – “she’s so
poised and can do some many things with her voice” – and Josephine Barstow:
“she’s so dramatic and sings out with real relish and style”. Alison also
has nothing but praise for the sound engineers who have only one
opportunity to hear a singer, after which they must make adjustments to
balance levels. In a way it’s nice to have someone to make necessary
adjustments, she says! But, after a morning of rehearsals at OHP, she’s
very much aware of the need to listen to her own voice.

Musical theatre also requires performers to sing, dance and act with equal
panache. While Alison does have some ballet training – and her dance
skills, she tells me, will be put to good use in Un ballo! – she’s
had to learn new skills and adapt to the genre. When I ask if she would be
keen to do more musical theatre, it’s immediately clear that if Rodgers and
Hammerstein, or such like, were to be offered, she would snap up the
opportunity. She really enjoyed learning the role of Rose in Opera North’s Street Scene and will participate in a concert performance at West
Green of

In fact, in her younger days, Alison might have envisaged a career in
musical theatre or as a straight actor. Her family’s music interests were
largely classical and she feels that initially she might have been inclined
to ‘rebel’ against that. But, she’s clearly delighted to be performing at
Opera Holland Park this summer, remarking the quality of the casting at
OHP. She is very much looking forward to working with Matteo Lippi, who
sings Gustavo, and the whole Un ballo cast. And I, too, am looking
forward to finding out about this ‘new’ Oscar!