This exploration is particularly ripe in Donnerstag aus Licht – an
opera attuned to Stockhausen’s reshaping of musical perceptions. Take away
the impossibility of what the composer asks us to see and what are you left
with? The answer is a mystical cosmos which probes the notion of
invisibility in music, the relationship between space and time, of spatial
divisions and oscillating perspectives in sound, the fusion of the
electronic and the instrumental, and a matrix of ideas that is quite simply
ravishing on the ears.

There is a clear argument for suggesting that what Stockhausen does in his Licht operas is to ritualise the concert experience – and this is
probably a little more easy to identify in Donnerstag aus Licht,
the opera which was written first and which often seems less extravagant
than some of those which followed. Benjamin Lazar’s stage direction for
this concert performance placed ritual at its epicentre; but his real
achievement was to remain entirely – or, at least largely – faithful to the
text without swamping it with detail. In what is often quite a personal and
autobiographical work from the composer, this semi-staging often made this
strikingly clear.

This is an opera which begins and ends outside the theatre, and in one
sense this is entirely in keeping with its accumulating mass of thematic
ideas, especially in the music Stockhausen composed for it.
‘Donnerstags-Gruss’ begins in the foyer, taking in music we will hear in
the opera (those Bali riffs, for example). ‘Donnerstags-Abschied’ which
ends it takes place outside the theatre – and proved acoustically rich on
this occasion. With five trumpeters playing from high up on the balcony of
the Royal Festival Hall, and in the front of the river, it was that very
spatial dimension, the ebbing and flowing of perspective, which repeated so
much of what you heard in the hall itself.

Act I (Michaels Jugend) is sparsely scored, but it throws us immediately
into the triplicate format that Stockhausen rarely deviates from. Eve,
Luzifer and Michael emerge – and then merge. ‘Kindheit’ is a trio devoted
to childhood – of a mother teaching her son the days of the week, of
Luzifer the rote learning of numbers. But it is about remembrance of the
past, too. Of soldiers in Nazi Germany, of childhood hunting trips, of a
mother’s descent into madness. This is the tragedy of any dysfunctional
family – and Lazar’s direction doesn’t shirk from showing us this. In
‘Mondeva’ Eve is restrained by doctors, a needle injected into her neck
(almost recalling the horror of forced Nazi euthanasia) and drowned in a
bathtub; Luzifer dies on a battlefield. In ‘Examen’ Michael is seen
auditioning for entry to a conservatory. Stockhausen didn’t necessarily
have to look too far for the plot here because it largely came from his own
past. But the complexity is in the shadows he creates – the trio of singers
is replicated in a trio of instruments (a trumpet, a trombone and a basset
horn) and by the end of the act they have all gone through the incarnations
that come to symbolise the fracturing of time in Stockhausen’s world.

It was immediately apparent from the very beginning of Act I how
superlative the singing was, how entirely immersed in the roles the
soloists were. It was to be a hallmark of the opera throughout. LÈa
Trommenschlager’s Eve was extraordinarily powerful – but she managed to
bridge motherly tenderness with simplicity; when she began her descent into
madness you were reminded of Seneca’s Medea – but in almost pocket-sized
form. Hubert Mayer’s Michael managed to achieve the impossible – a
reduction of his voice into youthfulness and innocence, with just a hint of
inquisitiveness. Damien Pass’s Luzifer is a voice centred on a dark, rich
bass – but how stentorian he was, almost terrifying at times. One could
argue amplification made all these voices more focussed and more forward
than they might normally sound, but the upside was their German was
impeccably clear. 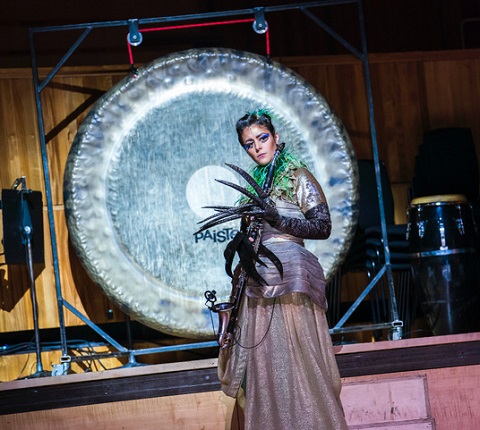 Act II (Michaels Reise um die Erde) is unusual in that it is derived
entirely from instrumental and electronic forces. Stockhausen thinks
somewhat outside the box here in that Michael (this time as a trumpeter)
travels the earth in a vast globe while the orchestra are penguins at the
bottom of a glacier-covered world. Lazar’s compromise (for that is all he
can do) is to have a projector screening the rotating of a celestial orb –
almost with the randomness of a dice being thrown – with each stop on this
whistle-stop journey being shown. We travel to Cologne (perhaps not that
coincidental since it was where Stockhausen was born), New York, Japan,
Bali, Central Africa and India. The stops might be brief – but the styles
are ever-changing, like a musical kaleidoscope.

This is an act that is about conflict and combat; but it also one that is
about a journey entwined in love and eroticism. It is a tour de force of musical creativity, enormous virtuosity and skill
– often asking its central characters to play their instruments and act
simultaneously as well. Benjamin Lazar’s direction left nothing to the
imagination here and this was simply galvanising theatre. In its most basic
form, this whole second act is like a vast trumpet concerto though the
interplay between instruments really makes it more than this. It opens with
Michael’s trumpet (the magnificent Henri DelÈger) and Luzifer’s trombone
(the equally superb Mathieu Adam) engaged in a duel, sparring centre stage
with instruments flashing like foils. A clarinet (Alice Caubit) and basset
horn (Ghislain Roffat) buzz around the orchestra, menacingly and waspishly,
acting like clowns. Michael duets with a tuba (Stuart Beard) and then slays
him like a bear. A love scene is played out between Michael and Eve (here
played on the basset horn by Iris Zerdout) though it seems both macabre and
heavily ritualised in its love-making with an almost sleazily erotic
edginess to it.

The two scenes that comprise Act III (Michaels Heimkehr) are vastly
different in scale. ‘Festival’ is for large choral forces and orchestra;
‘Vision’ is like chamber music, focussed mostly on the Michael performers
and acts as a kind of summation of all that has gone before. For some,
‘Vision’ can draw one in with its cathartic, hypnotic translucence; for
others, it’s a long-drawn out epilogue where the attention flags. Which
camp you fall into will largely depend on the quality of the three Michaels
– and also on the dramatization which accompanies them through the
half-hour stretch this music takes. I think this performance succeeded –
perhaps narrowly – in taking us into the cathartic side. 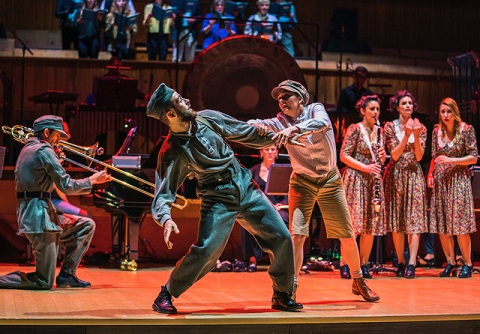 Act III didn’t really disappoint in its relative closeness to the text.
This act is all about Donnerstag aus Licht in tri-form – Eve,
Michael and Luzifer are all, at one stage or another, represented as
singer, instrumentalist or dancer. Eve presents Michael with three plants,
the branches of which he interprets as rays of light, and there follows
three light shows. As the words “then streams come down” appeared on screen
so the light show began – multi-coloured lasers, in broken shards, or
diamond trellises, a web that stretched across the stage. A tam-tam glowed
like a sun (or perhaps a moon), for it to shift into an eclipse. With the
words “glass suns” it seemed to be refracted in a mirror, but then became
the iris of an eye. Act III is the depiction of Michael returning to his
celestial home – and Lazar took this more than literally.

Invisible choruses are heard on tape – but they are then taken up by five
sectional choruses divided around the stage. But there is conflict as well.
The Michael and Luzifer dancers tumble and fight, soon to be joined by the
trumpet and trombone in battle – until Luzifer is vanquished. But he
reappears in his human form as tormenter. ‘Vision’ is almost a kind of
shadow play, the learning curve through which Michael has travelled on his
journey.

There is an undeniable feeling of completeness in Donnerstag aus Licht as you experience it, not least because it
seems self-contained as theatre. But, you can also begin to see the
disintegration of the structure Stockhausen was to bring to later Licht operas in how the acts themselves are conceived. Benjamin
Lazar’s concert staging perhaps isolated this more than one might have
expected – the bareness of Act I seemed very hollow against the overwrought
franticness of ‘Festival’ from Act III. Much of ‘Festival’ had been very
impressive, even if it felt just a little too like a carnival at times –
Mathieu Adams’s trombone-playing and tap-dancing Luzifer was simply
extraordinary to watch, for example. Henri DelÈger’s trumpet-playing
Michael was so heroic, the timbre so assured whether the playing was muted
or played open, that he was clearly the dominant force here. It’s rare that
you hear such colour brought to this instrument, but here it was so
variegated. Jamil Attar’s Luzifer (as dancer) was elliptical in his
body-shaping, athletically brilliant but with every movement seemed to
synchronise with the tenebrous shadows that Pass’s vocal Luzifer breathed
like fire. 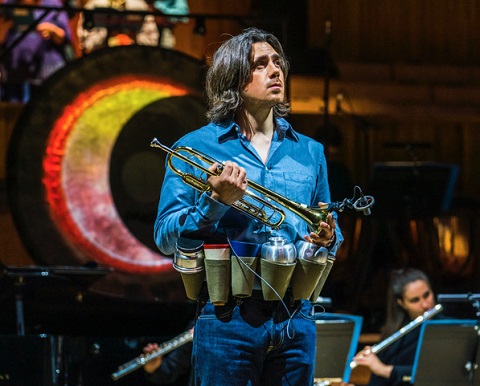 The three Michaels in ‘Vision’ were a mesmeric trio. One of the
difficulties Stockhausen can sometimes over-emphasise in the Licht
operas is an indistinct timbre in the vocal line. These are characters at
different stages, and they imply different things through a long journey.
Hubert Mayer’s younger Michael never wavered in his innocence. Safir
Behloul was hugely impressive as the Act III Michael – especially in
‘Vision’ where so much of his singing shifts from German into a kind of Stimmung style of phrasing. DelÈger’s often breathtaking trumpet
playing just dazzled in its tone colours.

Le Balcon, the London Sinfonietta, the Royal Academy of Music Manson
Ensemble and New London Chamber Choir – under the enormously assured and
flexible baton of Maxime Pascal – couldn’t have given better support.

It’s rare you hear any opera where there are no weak links – but this
performance of Donnerstag aus Licht was pretty faultless on
multiple levels. So much of this had to do with the enormous clarity of the
music we heard and not the obfuscation of a complex direction. What
Benjamin Lazar advocated so strongly for is a design which had theatre,
movement and lighting but allowed the conductor Maxime Pascal to illuminate
the instrumental music, the tape sounds, the voices and soloists in a way
which played to the strengths of Stockhausen’s sonorities. If the Royal
Festival Hall can sometimes seem an opaque acoustic, here it was
transformed into one which was rather revelatory. The ears were not just
once or twice seduced by the mysterious effect of sound – it was a
commonplace feature. This was an adventure, rather than simply a
performance. Or, as a young man who happened to be passing through the
terrace during the ‘Donnerstags-Abschied’ said to me: “It’s really trippy”.
He really couldn’t have come up with a better description of what
Stockhausen is all about and what this completely memorable evening so
amply demonstrated.