The elements which make up Jacques Offenbach’s Fantasio don’t
immediately sound like a bundle of laughs, but there is mirth alongside the
melancholy and Martin Duncan will aim to draw forth both, and the
operetta’s slightly surreal quality, when he directs Fantasio at

I begin by asking Martin, who’s directed several of the composer’s works in
the past, why he was keen to bring Fantasio to the stage, and he
replies simply, “I was asked!” Martin’s production of another ‘unknown’
Offenbach opera, the absurdist Vert-Vert, at

won accolades, with one critic describing it as ‘two and a half hours of
unalloyed pleasure, excelling in every department’ and another remarking,
‘It’s seldom that I’ve witnessed an operetta by Offenbach as well performed
as this’. And, Martin is looking forward to introducing Fantasio
to audiences who will have no idea what to expect.

“I like telling people new stories. The audience will have no
preconceptions. We’re performing in English [in a new translation by Jeremy
Sams], so they won’t be looking up at surtitles, they’ll just be drawn into
the story. I don’t want to direct, say, The Marriage of Figaro.
I’ve seen it. It’s been done well, and it’s a brilliant opera: I’ve got
nothing more to say. I want to tell new stories.”

concert performance in 2013? He didn’t, but he has listened to the
subsequent recording (which is in French). Mid-rehearsals at Garsington, he
feels that because the cast are now actually acting, the drama inevitably
has a greater freshness and energy. In 2013 I found the Act 1 exposition
rather lengthy and the music occasionally a little humdrum (there’s quite a
bit of self-quotation), but Martin feels that the English text will speak
more directly to the audience. In any case, they’ve had to cut quite a bit
of the spoken dialogue, not least because the three-act operetta has to be
divided into two parts which are separated by the Garsington long-interval.
Here, Acts 1 and 2 will precede dinner, with the short final Act serving as
a digestif.

And, what does Martin make of the operetta’s ‘story’? It didn’t go down
well with the Parisians in 1872 and was withdrawn after just ten
performances at the ThÈ‚tre du Ch‚telet. Some have blamed the timing: the
aftermath of the Franco-Prussian war, and a climate of growing nationalism
and antisemitism, was perhaps not an opportune moment for a German-born Jew
to stage a work based on a play that had been set in Munich. Others
criticise the libretto which was fashioned by Alfred de Musset’s brother
Paul from the former’s original drama, which had itself flopped at the
ComÈdie-FranÁaise in 1866.

Martin remarks that it is odd that Offenbach chose to set a text which had
been so unsuccessful! But, he feels that Fantasio shares with Vert-Vert a melancholy tenor. Once again, he finds himself staging
a funeral, the burial of the eponymous dead parrot which opens Vert-Vert being matched by the slow, sombre funeral chorus which
ends Act 1 of Fantasio. But, when people encounter the title,
Martin notes, they will anticipate something ‘fantastical’ and there’s
plenty of fantasy and fun too. A short YouTube clip of
the 2017 ThÈ‚tre du Ch‚telet production reveals a predominantly dark stage,
with brief splashes of light, but Garsington’s stage will be a riot of
colour and brightness. Martin is delighted to be working again with
designer Frances O’Connor – “we think on the same wave-length” – and hopes
the set, which will open out at times to create multiple locations – will
exude an air of surrealism: after all, Martin smiles, being a member of an
audience seated in a ‘floating’ kabuki pavilion, in a country estate
garden, watching opera is a slightly surreal experience.

Some operas seem to lend themselves perfectly to the Garsington pavilion,
the action inside merging with the surrounding landscape as the light
fades, the glass sides flicker and night falls. The action of Fantasio, however, starts at night, necessitating some prudent
amendments from Sams, who has transformed Fantasio’s opening aria, ‘Voyez
dans la nuit brune’, from an address to the moon, marvelling at its beauty,
into an anticipation of the lunar glories soon to come. 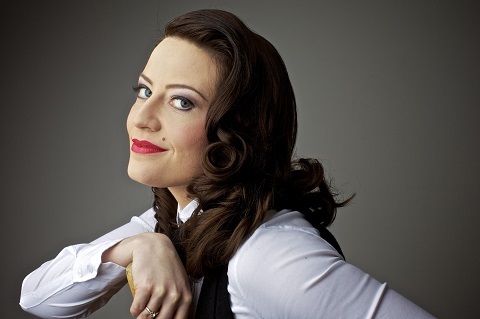 Hanna Hipp who sings the title role in Offenbach’s Fantasio.

And, what sort of a character is the eponymous protagonist, I ask? “He’s a
thinker, a scholar, there’s something of the poet about him.” A precursor
of Hoffmann? “Yes, Fantasio is often seen as linking the earlier opera bouffes to the later Hoffmann,” Martin comments,
which leads him to reflect on the humour in the operetta: “It’s not
pantomime. Comedy in opera is difficult. Frequently, singers resort to
stock gestures which are not really funny.” Martin began his career as an
actor, and those twenty years of experience have obviously taught him much
about ‘how comedy works’. He remarks that you “have to do comedy
seriously”. Too often actors perform in a way which they ‘think’ is funny,
but which isn’t. When he’s directing, it’s not enough for others to say
something is comic, it really has to make he himself laugh; but it’s
complicated – something that one finds funny one day, may leave one unmoved
the next.

Martin certainly has a terrific cast to work with, all of whom, he
emphasises, are really dynamic on stage. That morning they have been
rehearsing Princess Elsbeth’s virtuosic aria, ‘Quand l’ombre des arbres’,
and Jennifer France has been making the twirling runs and leaps sparkle.
He’s delighted to be working again with Hanna Hipp, who will sing Fantasio,
(she sang the Mad Hatter in Alice’s Adventures in Wonderland which
Martin directed at Opera Holland Park in 2013). The Prince of Mantua and
his manservant Marinoni, who get the lion’s-share of the comic capers, will
be performed by Huw Montague Rendall and Timothy Robinson respectively. 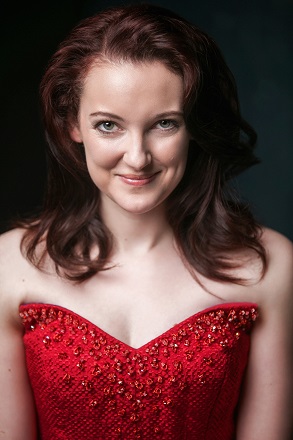 Jennifer France who is singing Princess Elsbeth in Fantasio.

The chorus have a large part to play, too – Martin was surprised when the
Garsington Chorus commented that they had more to sing in Fantasio than in

– and they are fully integrated into the action. Many of the chorus have
recently graduated from the country’s conservatoires, and they are “young
and enthusiastic”. Indeed, several chorus members are alumni of the Royal
Academy of Music and performed in Martin’s Royal Academy Opera staging of OrphÈe aux enfers at the Hackney Empire in 2017, a
production I greatly enjoyed: ‘colourful, camp, [Duncan’s] production
cheekily blended pantomime and postmodernism, and burst with vitality […] a
zippy burlesque to banish February blues.’

Offenbach seems to have made regular appearances during Martin’s work as a
director, and I wonder if this is simply coincidental or whether he feels a
particularly strong affinity for the composer’s music? Certainly, he sees
Offenbach as being at the start of a line which stretches from opera bouffe through Gilbert & Sullivan and on to the book
musicals of the 1940s. The latter literally tell a story through words and
music, spoken dialogue alternating with song, just as in an Offenbach
operetta. And, Martin continues, listening to Princess Elsbeth’s
aforementioned aria he was struck that morning by how closely it resembles
Bernstein’s ‘Glitter and be Gay’.

He explains that, as a child, he listened avidly to his grandfather’s
collection of G&S LPs, and went on to direct several D’Oyly Carte
productions, including HMS Pinafore, a production which, after a
successful performance at the Royal Festival Hall in 1999, transferred to
the West End the following year, marking the Company’s return to its
‘spiritual home’, the Savoy Theatre. His 1993 Orpheus in the Underworld, a co-production by D’Oyly and Opera
North, saw the former venture beyond its staple G&S repertory for the
first time.

Returning to Fantasio, Martin remarks that, while there is a bit
of self-borrowing, Offenbach’s score is “smashing” and that after a couple
of weeks of rehearsals a few earworms have dug in! But, when I ask if there
is anything else he’d like to share about the production, he’s reluctant to
offer any ‘pointers’: “I find it difficult to comment on a piece until I’ve
actually seen how it turns out. A director can explain what they ‘intend’,
but then audiences may comment, ‘Well, he didn’t achieve that!’” Martin
says he is nervous about a new work until he’s run through it in its
entirety; then, he can go back and tighten and tidy up.

Looking ahead, I ask what future ventures Martin has planned? September
will take him to Paris, for a grand spectacle,

, which will mark the re-opening of the ThÈ‚tre du Ch‚telet, following a
two-and-a-half-year renovation project. It’s a bit of a step into the
unknown, involving puppets from Mozambique, acrobats, clowns, and spilling
out into the spacious square in front of the theatre. Everyone is being
pushed out of their comfort zone, he comments. There is some radio work on
the horizon too, but no opera: “Perhaps this will be my last opera?” he
says, teasingly.

That doesn’t seem likely … but I ask, if he was told he could direct just
one more opera, which would he choose. Silence. “I know which ones I don’t
want to do!” He’s been reflecting on Jan·?ek of late, and he would also
like to re-visit an opera which he directed in Toronto with the Canadian
Opera Company in 1991: Britten’s Albert Herring. Another ‘comedy’
with a darker side, and one which is often over-looked, I suggest? Martin
agrees: the bitter undercurrents of parochial village life, a mother-son
relationship that is quite sinister, and a boy who is not permitted to grow
up don’t make for a light-hearted romp. Indeed, Martin’s May Queen jamboree
featured that characteristic dampener of English summers, a sudden
downpour, raindrops pummelling the roof of the festive marquee and mud
sloshing inside. And, I add, just as Fantasio andVert-Vert have a melancholy strain, so there’s a funeral song in Albert Herring too – the faux-sincere threnody that the Loxford
worthies sing for Albert, when they fear the worst.

According to the old adage, ‘Laughter is the best medicine’. But, comedy
cannot banish all human pain and sadness. And, it’s the plaintive strain
beneath the laughter, the elegiac tint that throws a shadow on the comic
surface, that Duncan is so skilful at illuminating.

Performances of
Fantasio
run from 14th June to 20th July.