One should at least be relieved that it’s set sometime during the 1800’s –
and not in a carpark where a resurrected Scarpia returns in Act III to
shoot Tosca as happens in Sturminger’s re-imagined production at Salzburg
(shabby, and a shocker). When I

this Covent Garden production back in January 2018, I seemed to view it
more as one malevolent and cruel empire set against the backdrop of a city
infected by poverty and moral decline. Andrew Sinclair’s revival seems a
bit less focussed on this – or perhaps I simply couldn’t see it because
what hasn’t changed is the simply unremitting darkness in which much of
this production is set. I still think Paul Brown’s designs are largely
impressive but what I noticed more this time was the imbalance of them.
There is perhaps something askew when the church of Sant’Andrea della Valle
in Act I lacked scale and Scarpia’s apartment at the Palazzo Farnese
doesn’t. This is a church that often resembles a crypt, but it fits well
with the oppressive feel of Act I where some are just nearer God and some
are just unfortunate enough never to be.

Act II did seem a little less pallid this time which was just as well
because it centred attention so much more neatly on the power struggle
which is the centrepiece between Scarpia and Tosca. Act I in this
production, despite all that is going on, still felt static; yet Act II
never seemed constrained – though I think this largely had to do with the
powerhouse performances of Terfel and Opolais who used every bit of the
stage like warring tigers. One was perhaps a little more conscious of
diversions, such as the opening and closing of window shutters (I really
lost count of how many times that happened), but they prowled
magnificently. Act III still seems problematic. I was more conscious than
ever that it seemed back to front. Depending on where you sit in the
stalls, the shooting posts have a tendency to block your view and the
lighter this short act becomes the less it becomes visually convincing. As
impressive as this particular immolation from Tosca might have been, one
was still left with the impression she had simply flung herself off the end
of a rather inconspicuous pier. 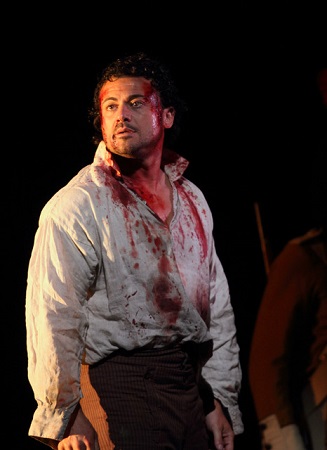 The shock value in this revival comes from the casting. The opening night
audience clearly fell in love with Vittorio GrigÚlo’s Cavaradossi. The role
is a relatively recent one he has taken on, having made his debut with it
at the Metropolitan Opera last year; I can’t help but feel somewhat
equivocal about him. Joseph Calleja, who sang Cavaradossi in 2018 here,
sounded rather small – GrigÚlo is the exact opposite. His is not a voice to
shy away from using its wide range, though what many might confuse as heft
I’d rather describe as ungainliness. What is so frustrating about him is
that there is such an undeniable originality he brings to his phrasing
which, in part, is an extension of his quite remarkable acting. Okay, some
might call it a little hammy, and certainly it stretches the boundaries of
good taste relatively speaking, but just as his acting pushes limits so
does his vocal characterisation of this part. If a tenor like Jonas
Kaufmann is always pristine and rich in this role, GrigÚlo cuts it with an
unpolished legato and a roughness which seems much closer to Cavaradossi
himself. He is really a little uncouth. But no one really falls in love
with perfection, or even a remotely ideal personification of it. I’ve
rarely heard a more visceral ‘Recondita Armonia’ but it did GrigÚlo few
favours because the voice was often at such full tilt it sometimes felt
off-balance. Thrilling it might have been, but you also felt he was going
to fall flat on his face (or, rather, off his scaffold). His acting during
‘E lucevan le stelle’ was enormously draining to watch – but at the same
time compelling. Did one really care that the voice (again stretched at an
unbelievably loud volume) fractured in places? Not one bit. He certainly
has the ability to sing with restraint – this was notable in some of his
duets – and he can scale the voice down when he wants to. But ultimately,
this felt like a performance from a tenor who liked to live both in the
fast lane and somewhat dangerously. A Cavaradossi who perhaps had parked
his sportscar is Sturminger’s Salzburg carpark. 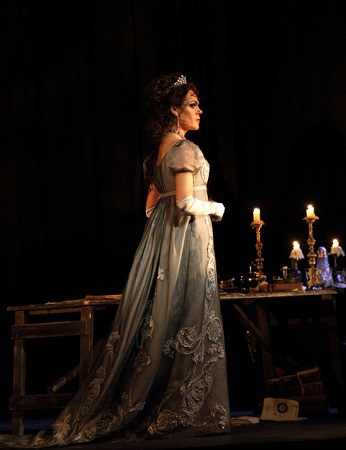 Kristine Opolais’s Tosca, on the other hand, seemed everything her
Cavaradossi wasn’t. If he wobbled and seemed rough-hewn, she was like an
empress with an ermine softness to her bottom register and a steely
brilliance to her upper that never betrayed a hint of unsteadiness. I’ve
never really noticed in many Tosca’s previously the underlying jealously
that betrays her character in Act I but here Opolais was a real
storyteller, unravelling her insecurity with touching sincerity and a
little humour to pad it out. Some Tosca’s can – indeed do – seem very
distant from their Cavaradossi but Opolais worked a beautiful chemistry
with GrigÚlo. But Tosca is a very complete role, one that requires a singer
to be a great actress too and that is no more so that in the great Act II.

I suppose any Tosca today would be fortunate to have Bryn Terfel as her
Scarpia and Opolais did not waste this opportunity. Perhaps because Terfel
brings such sheer brutishness and malevolence to Scarpia, Opolais was
formidable. The voice is just heavenly – those high notes were like
jangling chains whipping against exposed flesh. But how rare to hear a
‘Vissi d’arte’ that was sung with so much reverence and depth to its inner
meaning. So many sopranos sing this aria towards the audience; Opolais was
bowed, penitent, the voice like an invocation. It made her killing of
Scarpia all the more gruesome as she stabbed him not once, but twice,
exposing his waistcoat so we could see his blood-soaked shirt.

Terfel’s Scarpia has lost nothing over the years. There are any number of
things about his performance which still have the capacity to shock an
audience. His stage presence is completely absolute, and you oddly feel
he’s there when he really isn’t doing anything. His magnetism is beyond
compelling. Terfel’s Scarpia is becoming very like Tito Gobbi’s – the
snarling notes, the eyes that widen and glower with terrifying power, the
stalking like a presumptive predator. When he unbuttons his waistcoat
because he believes he has vanquished Tosca the shock he might actually
rape her is quite real. The voice itself is a massive instrument, a hammer
of Thor. What was so exquisite about this Act II – so completely compelling
– was Terfel’s projection of the notes. Every nuance was there; it was
simply astonishing.

What was also unquestionably better this time was the conducting of the
score; Alexander Joel clearly knows his way through the treacherous terrain
of Puccini’s music. There were moments when he felt the need to linger, or
broaden his tempo – Act II was generally somewhat longer because of his
tendency to just make it one long crescendo that suddenly collapses into
final murderous resolution. He sometimes made GrigÚlo’s more
heroically-minded attempts at stage dominance more difficult by reigning
him in, notably during ‘E lucevan le stelle’ which caused the tenor
problems – but the opposite was the case during GrigÚlo’s two cries of
‘Vittoria’ which pushed him into brinkmanship. The orchestral playing was
glorious with beautiful string tone, and Joel evidently lavished attention
to the brass playing; the horns at the opening of Act III were simply
fabulous in both tone and precision.

This is a Tosca that still looks beautiful at times, though that
beauty often means it looks somewhat gritty, perhaps even grungy in places.
No amount of gold can make a crypt look ecclesiastical, and not even a
star-lit sky can rescue a final act that looks like a couple of scrappy
wooden posts beside a grey wall that, well, looks like a grey wall. This
was an evening rescued by its singers – and in the case of GrigÚlo’s
Cavaradossi rather overshadowed by it. If Opolais and Terfel gave us a
masterclass in great singing and acting, GrigÚlo gave us something else. I
came out of this undoubtedly interesting performance thinking I hadn’t
really seen Puccini’s Tosca but a new opera called Puccini’s Cavaradossi.