Bed?ich Smetana’s The Bartered Bride is essentially a sentimental
rom com. To benefit his own purse, Kecal tries to persuade JenÌk to give up
his claim on Ma?enka and barter her for a monetary reward, because
Ma?enka’s parents have agreed that that she must marry Vaöek, the younger
son of the rich landowner MÌcha and his wife, H·ta, to settle an earlier
debt. Kecal’s plans are eventually thwarted by JenÌk’s cunning, when he
devises a contract which allows him, MÌcha’s older son from his ?rst
marriage, to take Ma?enka as his bride. Love conquers all, after all.

Smetana colours his tale of Czech village life with toe-tapping polkas,
furiants and drinking songs, foot-stamping choruses and, in the final Act,
a full-blown circus spectacular. And, Paul Curran’s production of The Bartered Bride proved the perfect headliner for Garsington
Opera’s 30th seasons. In Curran’s hands the party goes with a
swing, the action is slick, and the music – with Jac van Steen conducting
the Philharmonia Orchestra – rouses one’s spirits.

Curran ignores the fact that The Bartered Bride is almost
synonymous with ‘Czech opera’. We have travelled far from Bohemian villages
and find ourselves in an English parish church hall in the 1950s. It’s not
an unprecedented transportation. Much has been written about the debt to
Smetana evident in Benjamin Britten’s early operas and, more specifically,
Martin Nedbal

has drawn attention to the way the stuttering Albert Herring – a mummy’s
boy who longs to grow up and break away from the apron strings, and who
becomes ever more alienated from his fellow villagers – draws on Smetana’s
characterisation of Vaöek.

Nedbal notes that ‘in his 1995 reminiscences about the inception of
Benjamin Britten’s fourth opera … librettist Eric Crozier acknowledged that
Bed?ich Smetana’s opera The Bartered Bride served as an
inspiration for the project’ and that ‘in his discussion of the 1951 opera Billy Budd, Donald Mitchell went so far as to claim that “Britten
fell in creative love with Vaöek’s stutter.”’ It can surely be no
coincidence that in 1943 Sadler’s Wells Opera produced The Bartered Bride, with Peter Pears cast as Vaöek.

But this musical relationship is no guarantee that a transplantation from
?esk˝ r·j to Loxford will be a success. That it undoubtedly is a triumph par excellence owes to the imagination, skill, attention to detail
and total commitment of Curran, Kevin Knight (designer), Howard Hudson
(lighting) and Darren Royston (choreographer). And, it must be emphasised,
the hours, days, weeks of rehearsal that the dedicated chorus and cast must
have devoted to ensuring that everything was pitch perfect and timed to a
tee. 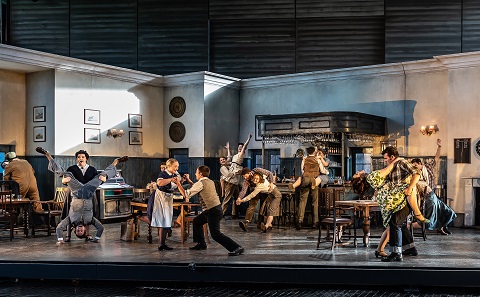 And, it’s not just Albert Herring who seems to resurface in this tale of
parochial avarice and amour. Britten’s Mr Gedge, the vicar, seems to rush
into the church hall at the start, enthusiastically directing the workman
to shuffle the table along, and plug in the LP player from which his
favourite music, the overture of Smetana’s The Bartered Bride,
will burst forth with heart-stopping energy and daring. He chats politely
with the ladies who do the flowers and bake the cakes for the church
bazaars. Later, he joins in heartily in the pub drinking-song frolics,
before bashfully apologising to a young lass whose waist he might have
circled a little too tightly.

And, in H·ta, MÌcha’s second wife, we have a cross between Albert’s mum –
she’s forever combing Vaöek’s hair or blowing the sad lad’s nose – and Lady
Billows, when she disapproves of his defiant refusal of Ma?enka’s hand and
apparent desire to run away with the circus. 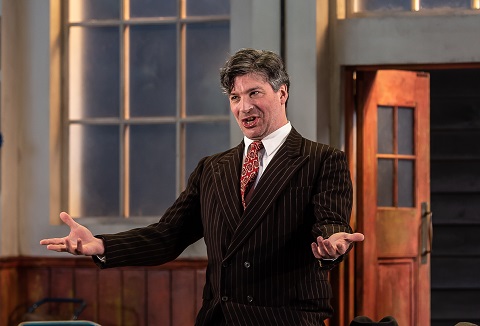 Knight’s designs are ingenious and persuasive. We start Act 1 in a village
hall equipped with a small raised stage for am dram – there’s a determined
parish nurse at hand ready to rehearse the rank and file – and with a
piano, proudly sporting gymkhana cups and rosettes, in position to
accompany a dance or communal song. Stage-left is a kitchen with a range
and fridge, shelves heaving with pots and baskets (and a violin case
resting on a trumpet!), an oversize kettle dangling from a hook, and a
steaming urn. They won’t go hungry here, as spam sandwiches and Victoria
sponges are piled high for post-entertainment refreshments.

As the chorus assembled during the overture, the way that Curran and
Royston made so much activity of so diverse a nature seem utterly fluid,
natural and absorbing was nothing short of miraculous. Stepladders are
shifted by handy-men; ladies in twin-sets dust the piano; the nurse drills
the dancers through their steps; a pair of cool dudes try to sabotage
Smetana and establish Elvis as the grooviest of them all; a cake is deftly
iced. Ladders swing – some in the hall are in danger of decapitation – and
doors slam, leaving others at risk of a headache, at the least: it’s The Play that Goes Wrong with the farce replaces by verisimilitude
and earnestness. And, it’s brilliant.

No less stunning is the set change between Acts 1 and 2. As M· vlast rings from the pit, the stagehands and chorus members
effect the slickest scene change you could imagine. They dismantle blocks,
swivel and slide them, whip away tables and chairs, and hey presto, before
we know it, we’re in the pub: furnished with a fully equipped bar, a
dartboard, and decorated with racing-horse prints. During the subsequent
extended duets for Ma?enka and Vaöek, and Kecal and JenÌk, the chorus amuse
themselves, as villagers do, playing darts and card games, smoking on
stools at the bar, indulging in girlie gossip. The beer is flowing and
there are several slightly desperate trips to the gents. Then, the
community come together to let rip to a duke box waltz. 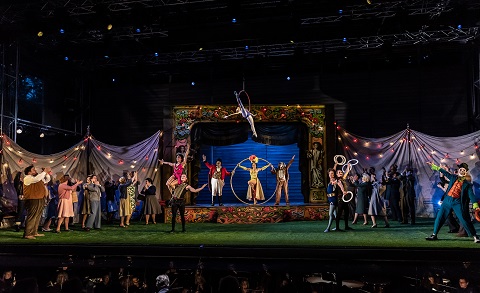 In Act 3 the circus comes to town – and offers a rather more elaborate
display and entertainment than Albert’s May-King fÍte. Standing in front of
a brightly curtained stage ‘‡ la Punch and Judy’, festooned with
red and light bulbs, the Ring-Master promises chair-swallowing native
Indians, a floor show of acrobatic improbabilities and a dancing bear. What
eventually ensues might not quite be Cirque du Soleil, but the six
circus performers present an unbelievably varied, overlapping sequence of
skills and tricks: they balance on shoulders and heads, juggle, ride
uni-cycles, hang from suspended rings by their toes, somersault and achieve
astonishing feats of strength.

Natalya Romaniw’s Ma?enka and Brendall Gunnell’s JenÌk are ‘made for each
other’ in just about every way. It doesn’t matter that, when slicing the
bread for the spam sandwiches, she aims for delicate while he prefers
doorstop: they’re a perfect vocal and romantic match. Both have endless
stamina and reserves of power, which they use judiciously. They can conjure
huge passion through emotive colourings and nuances, but they can also sing
with real tenderness, as in their Act 1 duet. They share a sense of fun –
an extended farewell is sweet and never twee – and even when they argue
there is a humorous undercurrent, JenÌk haughtily but forgivingly mimicking
the leg-crossing fury of the young lady who is too stubborn to listen to
the truth, when she fears that her beloved has betrayed her. 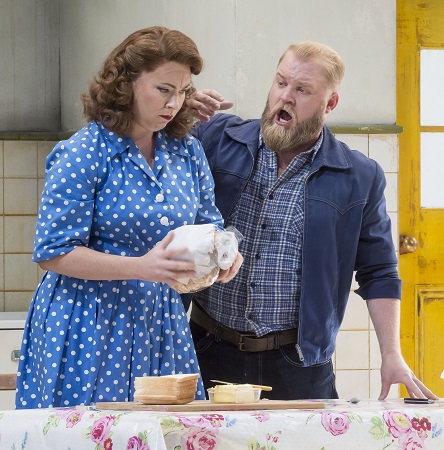 Romaniw’s Ma?enka is no shrew: but she knows her own mind and is frustrated
when her desires and ambitions are hindered – though she is more likely to
take it out on a Victoria sponge, which is sliced to smithereens, than on
the parents and community who inhibit her. Romaniw has a free and powerful
lyric voice but she knows how to sing quietly too, to wonderful expressive
effect. Her tone is full and warm, at whatever dynamic level. When she sang
of her imagined betrayal in Act 3, there can’t have been an untouched heart
in the Garsington pavilion; but in Act 2, she was a mischievous minx,
teasing Vaöek with tales of his betrothed – who plans to run away just as
soon as she has poisoned him. Gunnell displayed really captivating strength
and colour; there was an ardency borne of both love and the independence of
spirit with which he overcame his rejection by his step-mother.

Joshua Bloom’s Kecal swaggered in body and voice – with the bluster of the
bold, the bully and the blunderbuss. It’s a tricky task to embody the
marriage broker who must be both a nasty piece of work – deserving of the
villagers’ scornful eviction at the close – but also warm enough to make us
laugh. Bloom surmounted the challenges and sang with terrific authority and
spirit throughout. 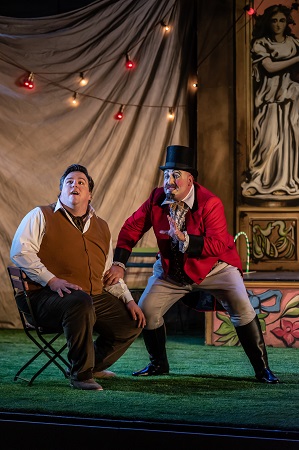 Stuart Jackson’s Vaöek stuttered and stumbled eloquently; Jackson has a
tenderness of tone that was just right for the unworldly Vaöek’s naivety
and nincompoop-ness; his tenor was an effective counterpoint to JenÌk’s
masculine strength, but that’s not to suggest there was a lack of power or
expressiveness. And, Jackson milked the comic moments without tilting into
mawkishness or mockery. Desperate to know what love means, he was a bear
with a spring in his step.

Heather Shipp was excellent as Ma?enka’s mother, Ludmila, especially in the
closing moments when it became clear from whence her daughter’s own
spiritedness had been borne. She was partnered well by Peter Savidge as
Kruöina, her husband, who proved more sensitive than one might suppose of
one prepared to sell off his daughter to save his own skin from penury and
public humiliation.

The Chorus almost stole the show; singing so rousingly, dancing with
aplomb, twisting the May-pole ribbons with dexterity and ease. And, the
Philharmonia shone from the pit in glorious technicolour. One impressive
aspect of Jac van Steen’s leadership was the way in which he shaped the
extended duets – as those in Act 2 for, first, Ma?enka and Vaöek, and then
for Kecal and JenÌk – clarifying the pace and nature of the changing
dramatic temperature and mood, and allowing the performers to sing with
flexible phrases which enhanced the dramatic naturalism.

Quite frankly, it’s difficult to imagine The Bartered Bride being
staged with more sincerity and charm than this. A brilliant and totally
beguiling start to Garsington’s 30th anniversary season.